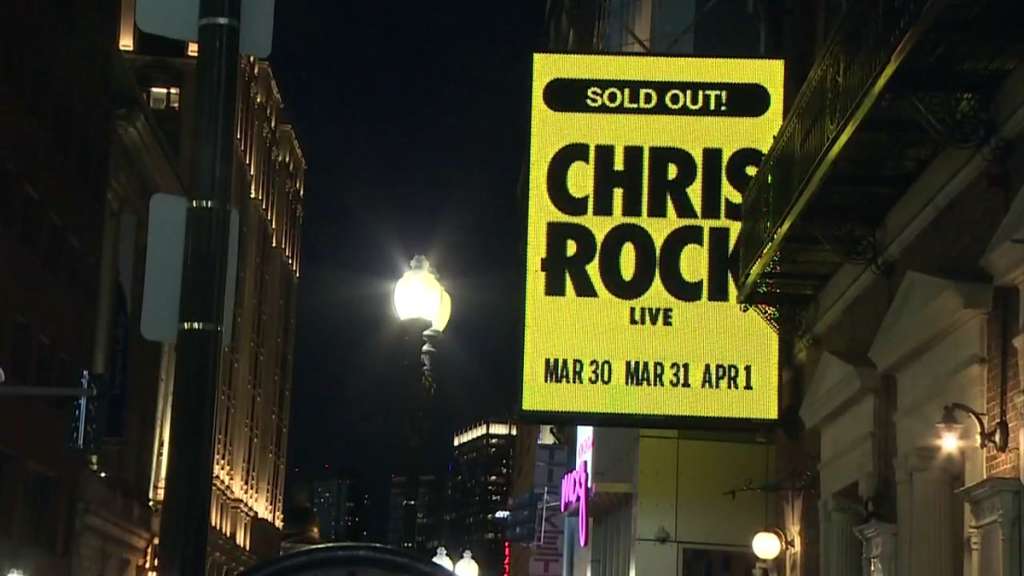 BOSTON (WHDH) - BOSTON (WHDH) — Comedian Chris Rock is preparing to perform in front of six sold-out crowds in Boston after Will Smith slapped him onstage at the 94th Academy Awards.

Rock will take the stage at the Wilbur Theater for a pair of shows on Wednesday, Thursday, and Friday amid fallout from an encounter with Smith that stunned a crowd that had gathered for the Oscars, as well as viewers at home.

Smith shocked onlookers when he took the stage during Rock’s remarks after the comedian made a joke about Jada Pinkett Smith, Smith’s wife. Rock said, “Jada, I love you. ‘G.I. Jane 2,’ can’t wait to see it.”

The joke touched a nerve. Pinkett Smith, whose head is shaved, has spoken publicly about her alopecia diagnosis. Smith strode on stage and slapped Rock across the face. Back in his seat, Smith twice shouted for Rock to “get my wife’s name out your (expletive) mouth.”

Now, ahead of the kick-off for his Ego Death world tour, local comedians are reacting to the situation still at hand.

“It’s every comedian’s nightmare for somebody to have that kind of reaction to you,” said Boston-based comedian Lamont Price. “I had the reaction I think most of the world had which was, shock.”

Price said he feels that Rock has no choice but to address the controversial moment.

“He can’t come out after what happened on Sunday and be like, ‘So, you guys been to Walgreens,'” he said. “Like, he can’t he has got to go right in.”

When asked if he thought the joke was over the top, veteran Boston comedian Steve Sweeney said it was not a joke he would have made.

“However, it’s irrelevant. That’s the bottom line,” he told 7NEWS. “If that had someplace in Massachusetts, Will Smith would have been in handcuffs and escorted out of the place”

Sweeney said he admired the way that Rock handled the incident and said he has no doubt Rock will use this incident in his upcoming show.

“I know he’s gonna have about 10 minutes of material on this,” he said.

RELATED: Wanda Sykes on Smith slapping Rock: ‘It was sickening’

Comedian Amy Schumer – who co-hosted the Oscars – wrote in a now-deleted Instagram post that she is just waiting for this “sickening feeling” to go away, “…still triggered and traumatized. I love my friend Chris Rock and believe he handled it like a pro…”

Sweeney said he agrees that Rock handled the situation well.

“The last thing that you are thinking about is somebody coming on the stage and hitting you,” he said. “It’s a shocking thing.”

Smith has since issued an apology to the comedian, the academy and viewers at home, saying he was “out of line” and that his actions are “not indicative of the man I want to be.”

“Violence in all of its forms is poisonous and destructive,” said Smith. “My behavior at last night’s Academy Awards was unacceptable and inexcusable. Jokes at my expense are a part of the job, but a joke about Jada’s medical condition was too much for me to bear and I reacted emotionally. I would like to publicly apologize to you, Chris. I was out of line and I was wrong. I am embarrassed and my actions were not indicative of the man I want to be. There is no place for violence in a world of love and kindness.”