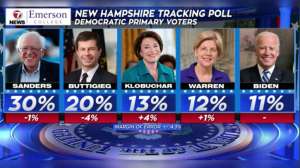 Sanders, who has consistently led the poll, is at 30 percent, down one percentage point from the previous poll. Buttigieg is still in second, although he saw the biggest post-debate loss of the poll — he’s now at 20 percent, compared to 24 percent previously.

And Klobuchar, who analysts praised for her debate performance, gained four points — going from 9 percent to 13 percent, good for third place. 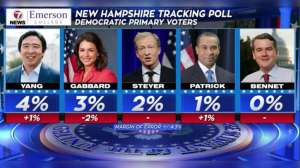 Entrepreneur Andrew Yang gained a point, putting him at 4 percent, while Hawaii Congresswoman Tulsi Gabbard lost two points after the debate and is now at 3 percent. Billionaire businessman Tom Steyer is holding at 2 percent.

And the debate gave a boost to former Mass. Governor Deval Patrick, now polling at 1 percent instead of his previous 0 percent. Colorado Senator Michael Bennet is still polling at 0 percent.