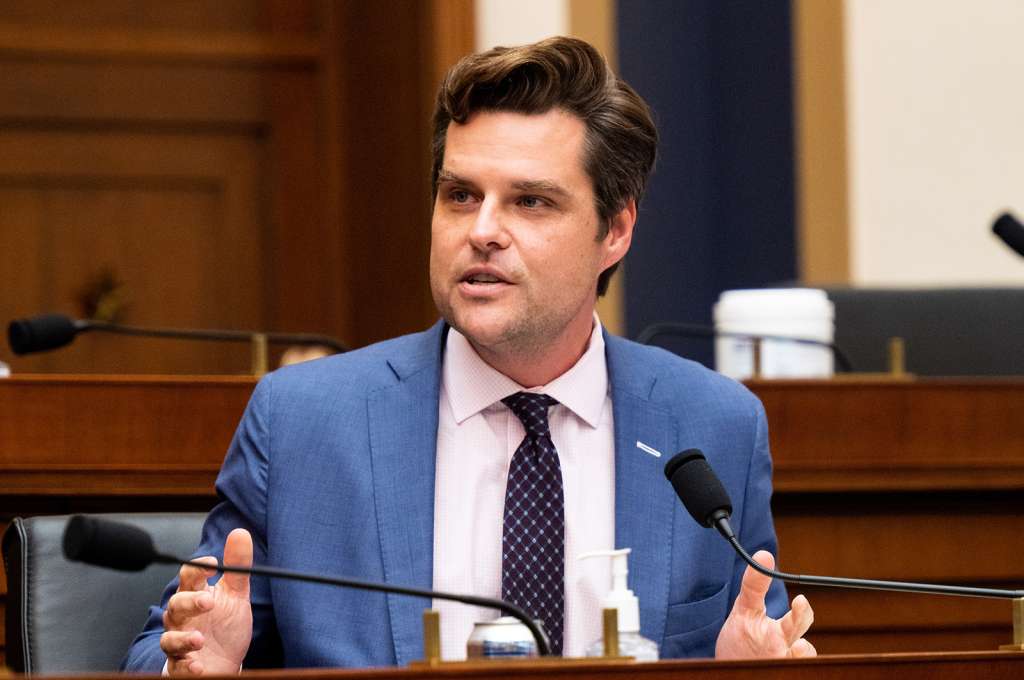 September 29, 2020 - Washington, DC, United States: U.S. Representative Matt Gaetz (R-FL) speaking at a House Judiciary Committee markup hearing on H.R. 7370, the Protecting Employees and Retirees in Business Bankruptcies Act of 2020; H.R. 2648, the Student Borrower Bankruptcy Relief Act of 2019; H.R. 8366, To amend title 11 of the United States Code to increase the amount of the allowable homestead exemption or the Protecting Homeowners in Bankruptcy Act of 2020; H.R. 8354, to establish the Servicemembers and Veterans Initiative within the Civil Rights Division of the Department of Justice, and for other purposes or the Servicemembers and Veterans Initiative Act of 2020; and H.R. 5227, the Technology in Criminal Justice Act of 2019. (Photo by Michael Brochstein/Sipa USA)
Associated Press

Few Republicans rushed to offer any kind of support to the three-term Florida congressman known for espousing high-volume attacks — sometimes against those in his own party — during his frequent media appearances. Several GOP lawmakers and top aides who requested anonymity to discuss the sensitive situation said Gaetz’s prospects for remaining in Congress were bleak and were complicated in particular by his unpopularity among colleagues in his own party.

Federal prosecutors are examining whether Gaetz and a political ally who is facing sex trafficking allegations may have paid underage girls or offered them gifts in exchange for sex, two people familiar with the matter told The Associated Press on Friday.

The scrutiny of Gaetz stemmed from the Justice Department’s probe into the political ally, Joel Greenberg, the people said. Greenberg, a former Florida tax collector, was indicted last year and is accused of a number of federal crimes. He has pleaded not guilty.

Republican congressional leaders have largely been silent about the investigation, which continues.

That reflected the serious nature of the charges in a story that seems to add new elements by the day, giving lawmakers little motivation to attach themselves to Gaetz.

Part of the investigation is examining whether Gaetz, 38, had sex with a 17-year-old and other underage girls and violated federal sex trafficking laws, the people familiar with the probe told the AP. Federal agents suspect Greenberg may have enticed the girls and then introduced some of them to Gaetz, and they are examining whether both men may have had sex with the same girls, the people said.

For those who have watched the congressman’s rise in Florida and Washington, there have been few surprises.

As a former state legislator, he was widely known in Tallahassee before arriving in the nation’s Capitol where he made a splash attaching himself to Trump.

Many colleagues on Capitol Hill view Gaetz as being obsessed with self-promotion, as illustrated by his numerous television appearances that are unusually high for a lawmaker not in a senior position, who spoke on condition of anonymity to describe internal conversations. This is Gaetz’s fifth year in Congress.

They are especially upset with his willingness to publicly take on fellow Republicans, which many consider needlessly divisive.

That was most clearly on display when he traveled to Wyoming in January to urge voters there to not reelect Rep. Liz Cheney. Days earlier, Cheney, the No. 3 House GOP leader, was among just 10 House Republicans to vote to impeach Trump.

Among the rare lawmakers to express support for Gaetz is freshman GOP Rep. Marjorie Taylor Greene of Georgia, another rising figure in the GOP propelled by her media appearances and use of social media to spread baseless conspiracy theories.

The Gaetz investigation, which has been going on since at least the summer of 2020, reached the highest levels of the Justice Department, and former Attorney General William Barr was briefed on the matter several times, the people said.

In the last few months, investigators have also interviewed several witnesses in the case and have been scrutinizing documents, including travel and financial records, the people said.

Greenberg was the elected tax collector in Seminole County near Orlando when he resigned last June after his arrest on federal charges. Initially, those included stalking a political opponent, trafficking a minor for sex and illegally using a state database to create fake drivers licenses and other ID cards.

Since then, the case against Greenberg has ballooned to more than 30 charges, including wire fraud and other charges involving efforts to divert at least $400,000 from the tax collectors office into cryptocurrency he controlled and for his own personal use, such as the purchase of memorabilia autographed by NBA greats Michael Jordan and Kobe Bryant, federal prosecutors say. Other charges accuse him of using two companies he controlled to attempt to fraudulently obtain coronavirus relief funds.

Gaetz has said the allegations against him are part of an extortion plot by an attorney in Florida, who worked decades ago as a federal prosecutor and whom Gaetz identified as David McGee.

In response, McGee’s law firm said the allegation that Gaetz made about the supposed extortion attempt was “both false and defamatory.” The firm said that McGee had served in top positions at the U.S. attorney’s office in Florida about 25 years ago and that his “reputation for integrity and ethical conduct was impeccable.”

The Justice Department has a separate investigation into the extortion allegations, being led out of the U.S. attorney’s office in northern Florida, according to a person familiar with the investigation who also could not discuss the matter publicly and spoke to the AP on condition of anonymity.

Gaetz has said that his family has been cooperating with the FBI and that his father was wearing a recording device, at the FBI’s direction, “to catch these criminals.” He also demanded the Justice Department release the recordings.

The Justice Department has not commented.