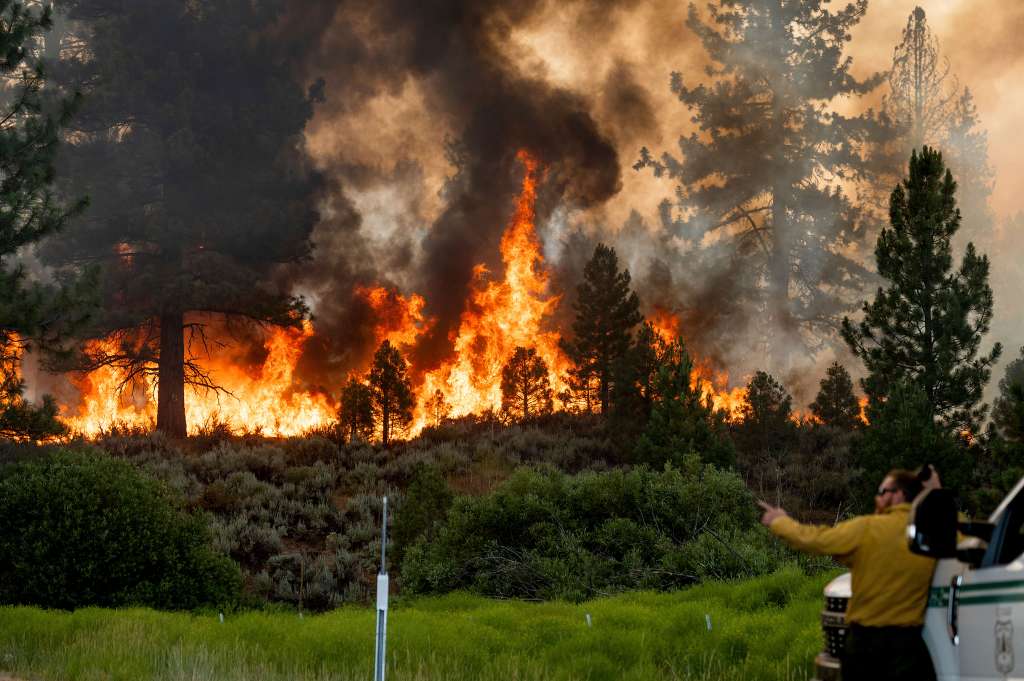 Firefighters working in searing weather struggled to contain a Northern California wildfire that continued to grow Sunday and forced the temporary closure of a major highway, one of several large blazes burning across the U.S. West amid another heat wave that shattered records and strained power grids.

In Arizona, a small plane crashed Saturday during a survey of a wildfire in rural Mohave County, killing both crew members on board. The Beech C-90 aircraft was helping perform reconnaissance over the lightning-caused Cedar Basin Fire, near the tiny community of Wikieup northwest of Phoenix, when it went down around noon.

Officials on Sunday identified the victims as Air Tactical Group Supervisor Jeff Piechura, 62, a retired Tucson-area fire chief who was working for the Coronado National Forest, and Matthew Miller, 48, a pilot with Falcon Executive Aviation contracted by the U.S. Forest Service. The National Transportation Safety Board is investigating the crash.

“Our hearts go out to the families of our brave wildland firefighters,” an Arizona Bureau of Land Management spokesperson said in a statement.

In California, officials asked all residents to reduce power consumption quickly after a major wildfire in southern Oregon knocked out interstate power lines, preventing up to 5,500 megawatts of electricity from flowing south into the state.

“The Bootleg Fire will see the potential for extreme growth today,” the National Weather Service in Medford, Oregon, tweeted Sunday.

Pushed by strong winds, the blaze exploded to 224 square miles (580 square kilometers) as it raced through heavy timber in Oregon’s Fremont-Winema National Forest, near the Klamath County town of Sprague River.

To the southeast, the largest wildfire of the year in California was raging near the border with Nevada. The Beckwourth Complex Fire — a combination of two lightning-caused blazes burning 45 miles (72 kilometers) north of Lake Tahoe — showed no sign of slowing its rush northeast from the Sierra Nevada forest region after doubling in size between Friday and Saturday.

Late Saturday, flames jumped U.S. 395, which was closed near the small town of Doyle in California’s Lassen County. The lanes reopened Sunday, and officials urged motorists to use caution and keep moving along the key north-south route where flames were still active.

“Do not stop and take pictures,” said the fire’s Operations Section Chief Jake Cagle. “You are going to impede our operations if you stop and look at what’s going on.”

Cagle said structures had burned in Doyle, but he didn’t have an exact number. Bob Prary, who manages the Buck-Inn Bar in the town of about 600 people, said he saw at least six houses destroyed after Saturday’s flareup. The fire was smoldering Sunday in and around Doyle, but he feared some remote ranch properties were still in danger.

“It seems like the worst is over in town, but back on the mountainside the fire’s still going strong. Not sure what’s going to happen if the wind changes direction,” Prary said. Erratic winds were a concern for firefighters, Cagle noted, with gusts expected to reach 20 mph (32 kph).

The blaze, which was only 9% contained, increased to 131 square miles (339 square kilometers). Temperatures in the area could top 100 degrees (37 Celsius) again Sunday.

It was one of several fires threatening homes across Western states that were expected to see triple-digit heat through the weekend as a high-pressure zone blankets the region.

Death Valley in southeastern California’s Mojave Desert reached 128 degrees Fahrenheit (53 Celsius) on Saturday, according to the National Weather Service’s reading at Furnace Creek. The shockingly high temperature was actually lower than the previous day, when the location reached 130 F (54 C).

Death Valley also recorded a 130-degree day in August of last year. If that reading and the one Friday are confirmed by experts as accurate, they will be the hottest highs recorded there since July 1913, when the Furnace Creek desert hit 134 F (57 C), considered the highest measured temperature on Earth.

The National Weather Service warned the dangerous conditions could cause heat-related illnesses.