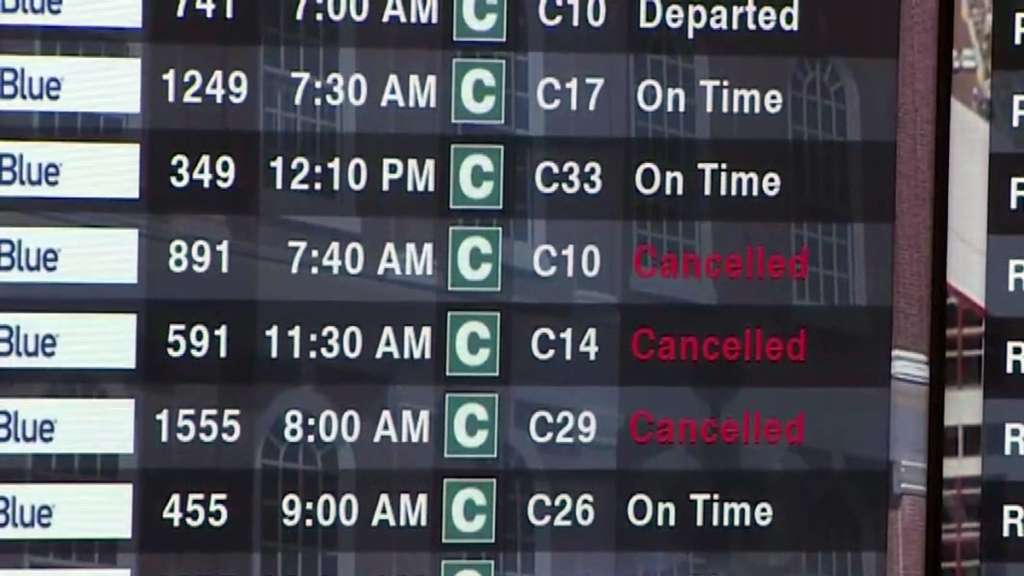 BOSTON (WHDH) - Passengers were left frustrated after thousands of flight cancellations and delays disrupted their travel plans over the weekend, with several airlines stranding hundreds of people on flights out of Boston.

JetBlue canceled more than 250 flights nationwide, including dozens at Logan Airport — accounting for half of all delays at Logan on Sunday. A slew of additional cancellations and delays kept travelers grounded on Monday morning as well.

In addition to JetBlue, Southwest, Alaska Airlines, Frontier, Spirit and American Airlines were most affected by the disruptions.

Scott Halper said he had been trying to get to Florida since Friday to make his cousin’s wedding, but didn’t make it in time.

“This was something I was very excited about,” Halper said. “It’s hard the last few years, I haven’t gotten to see my family a lot, so it’s really upsetting.”

In a statement, a JetBlue spokesperson said, “Over the past several days, severe weather in the southeast and multiple air traffic control delay programs have created significant impacts on the industry. We have unfortunately had to cancel flights this weekend, and today’s cancellations will help us reset our operation and safely move our crews and aircraft back in to position.”

Halper said the airline was not communicating well with passengers.

“I think it’s a little bit ridiculous they didn’t just cancel the flight, to leave people waiting,” Halper said. “I was a little bit angry [on Friday] but last night really got to me, I was at the airport for eight hours. I’m just astounded by the lack of communication.”

There were also major disruptions at several Florida airports, including in Miami, Ft. Lauderdale, Tampa and Orlando, as well as Baltimore and New York, according to Flightaware.