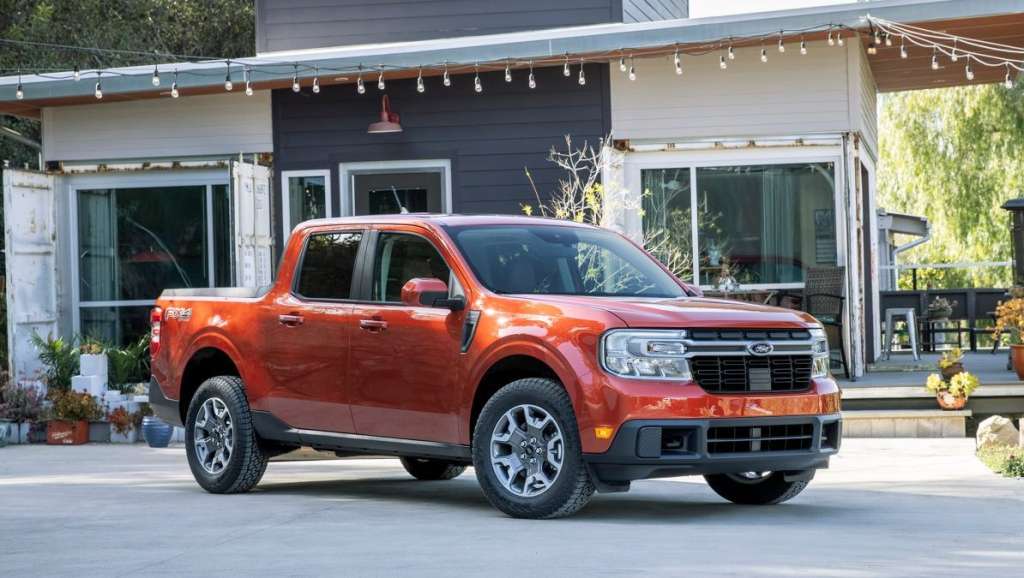 The Ford Maverick is designed to be comfortable for people who might not have owned a truck before. Courtesy Ford

(CNN) — Ford is famous for its huge F-150 pickup, America’s best-selling truck. But now, with the release of its new Maverick compact pickup, which will be available as a front-wheel-drive hybrid, it’s seeking to prove that it can rule in the growing market for little trucks as well

Ford hasn’t offered a real compact truck in the United States since the original Ford Ranger went out of production in 2012. Ford introduced a new Ranger, a mid-size truck, in 2018 but even that is considerably bigger than the Maverick.

The Ford Maverick is revolutionary in ways besides justits size. Most strikingly, the least-expensive base-model version will be a front-wheel-drive hybrid powered by an electric motor as well as a gasoline engine. (It will not be a plug-in hybrid, though, so owners will not be able to charge it up for extra electric-only driving range.) Ford recently started selling a hybrid version of the big F-150, but it’s not the entry-level version of that truck.

Havingfront-wheel-drive, while common among cars and even crossover SUVs, is also very unusual for a truck. Rear-wheel-drive allows for bigger engines, since the transmission doesn’t have to be contained under the hood. Also, when a truck is hauling heavy cargo or towing, there’s more weight in the back so rear-wheel-drive can provide better traction in those situations. But front-wheel-drive allows for more efficient use of space in a vehicle, since there’s no transmission under thepassengercompartment.

Although there will be versions of the Maverick with some off-road capability, it is designedmostly for city and suburban streets. It will be available only in a four-door body style, with seating for up to five people.

“Maverick challenges the status quo and the stereotypes of what a pickup truck can be,” Todd Eckert, Ford truck group marketing manager, said. “We believe it will be compelling to a lot of people who never before considered a truck.”

The market for smaller trucks is becoming hugely competitive. Hyundai recently unveiled the Santa Cruz, which the Korean automaker refers to as a “Sport Adventure Vehicle.” Nissan also recently revealed a redesigned version of its Frontier mid-sized truck. In the United States, Toyota is by far the dominant player in smaller trucks, with its rugged Tacoma mid-sized truck. The Tacoma, which is still bigger than the Maverick, accounts for more than 40% of all mid-sized trucks sold in the US, according to data from Cox Automotive. That’s an even larger share in that segment than the F-150 takes among full-size trucks.

But none of those trucks are as small as the Maverick, which is about a foot shorter, bumper-to-bumper, than the Tacoma. Prices for the Maverick will start at about $20,000. That’s less than other trucks on the market and about $5,000 less than the current Ford Ranger, which is between the Maverick and F-150 when it comes to size.

The hybrid base version of the Maverick hasa four-cylinder gasoline engine assisted by an electric motor. Together, they can produce up to 191 horsepower and 155 pound feet of torque, which is a measure of pulling powertraditionally considered an important metric for pickup trucks.

It’s also unusual for the lowest-priced base version of a vehicle to be a hybrid, but Ford engineers said they wanted to emphasize fuel economy and value in this truck. The Maverick will get about 40 miles per gallon in city driving, according to Ford. Ford did not provide estimates for highway mileage or for overall driving.

The Maverick will also be available in a non-hybrid version with a turbocharged 250-horsepower engine that can produce up to 277 pound-feet of torque. The non-hybrid Maverick will also be offered with all-wheel-drive, something that won’t be available on the hybrid truck.Ford has not yet said how much other versions, besides the base model, will cost.

Besides being shorter, front to back, than Ford’s other trucks, the Maverick is also lower, with cargo bed walls designed to be easily reached. That’s also an important benefit for a truck that could be parked in a tight urban parking space where access from the tailgate could be difficult.

Inside thebed, the Maverick has two eight-inch square covered openings on either side to hold small items, and it will also be available with optional electric power plugs. As with some other pickup beds, the Maverick is designed with slots so that wooden planks can be used to create dividers to hold cargo in place.

The back seats can be folded, revealing deep storage space underneath. The Maverick’s interior also has special triangular slots inside designed to hold a variety of accessories, such as additional cupholders or phone holders. Ford will share 3-D printing plans so owners can make their own accessories to fit the slots.

The new Maverick will share much of its engineering with the Ford Bronco Sport and Ford Escape SUVs. That kind of “platform sharing” should make re-entering the small truck market an appealing business proposition for Ford, said Brian Moody, executive editor of Autotrader. Sharing engineering across different models spreads out development and manufacturing costs, making it easier for those models to return profits for an automaker.

The Ford Maverick is expected to go on sale in the fall.