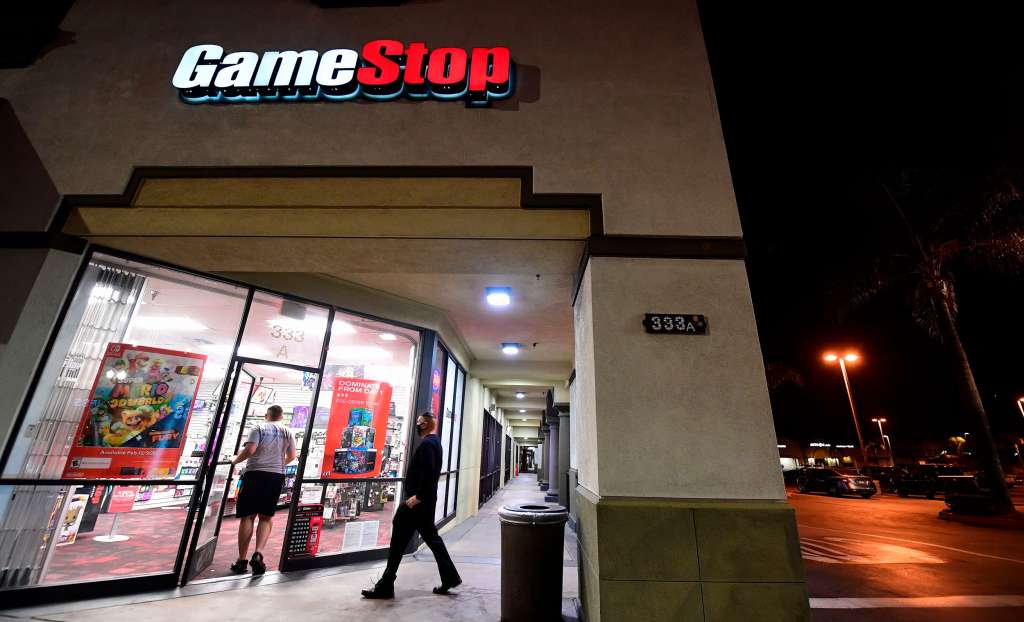 People enter a GameStop store in Alhambra, California on January 27, 2021. - An epic battle is unfolding on Wall Street, with a cast of characters clashing over the fate of GameStop, a struggling chain of video game retail stores. Traders have been astounded in recent days by the surge in struggling video game retailer GameStop's share price, after a group of amateur investors banded together over the online platform Reddit to fight the Wall Street funds that had pushed its price lower. (Photo by Frederic J. BROWN / AFP) (Photo by FREDERIC J. BROWN/AFP via Getty Images)

NEW YORK (AP) — The U.S. stock market certainly shook when hundreds of thousands of regular people suddenly piled into GameStop early this year, driving its price to heights that shocked professional investors. But it didn’t break.

That’s one of the takeaways from a report by the Securities and Exchange Commission’s staff released Monday about January’s “meme-stock” mania. As GameStop’s stock shot from $39 to $347 in just a week, some of the stock market’s plumbing began creaking, but the report indicated the market’s basic systems and operations remained sound.

The surge for GameStop and other downtrodden stocks also laid bare how much power is being wielded by a new generation of smaller-pocketed and novice investors, armed with apps on their phones that make trading fun.

“The extreme volatility in meme stocks in January 2021 tested the capacity and resiliency of our securities markets in a way that few could have anticipated,” the report said. “At the same time, the trading in meme stocks during this time highlighted an important feature of United States securities markets in the 21st century: broad participation.”

Many of the points in the report were already known, such as how the extremely heavy bets made by some hedge funds against GameStop’s stock actually helped accelerate its extreme ascent, though they weren’t the main driver.

The report also didn’t make any recommendations for changes to how the market is structured, but it pointed to several areas for further consideration. They include topics that SEC Chair Gary Gensler has already cited in recent speeches, such as whether the way some brokerages make their money encourages them to push customers to trade more often than they should.

The report also indicated the SEC could further scrutinize events that may cause a brokerage to restrict trading in a stock. During the height of the frenzy, several brokerages barred customers from buying GameStop after the clearinghouse that settles their trades demanded more cash to cover the increased risk created by its highly volatile price. That left many investors incensed.

The report also raised questions about whether investors are getting the best execution on their trades when so many are getting routed to big trading firms instead of to exchanges like the Nasdaq or the New York Stock Exchange.

And, perhaps in a disappointment to some of the investors who piled into GameStop to punish the financial elite: The SEC’s staff said it doesn’t believe hedge funds were broadly affected by investments in GameStop and other meme stocks.

During the run-up of GameStop’s price, many people were bellowing on Reddit and other social media platforms that this was their chance to stick it to the hedge funds. They took aim at funds that had bet GameStop, a struggling video-game retailer, would see its price continue to fall.

Those hedge funds did that by “shorting” the stock. In such a trade, a short seller borrows a share, sells it and then hopes to buy it back later at a lower price to pocket the difference.

Some of those short sellers were indeed burned. And when they bought GameStop shares to get out of their suddenly soured bets, the buying helped push the stock up even further. But other hedge funds that had earlier bet on gains for GameStop’s stock made profits, as did others who jumped into the upsurge.

Hedge funds as a group have been making money this year, including a 1.2% return in January during the throes of the meme mania, according to the HFRI Fund Weighted Composite index.

The SEC’s staff nevertheless said that improved reporting of short sales is another area worthy of further study, particularly if it will help regulators better track the market.