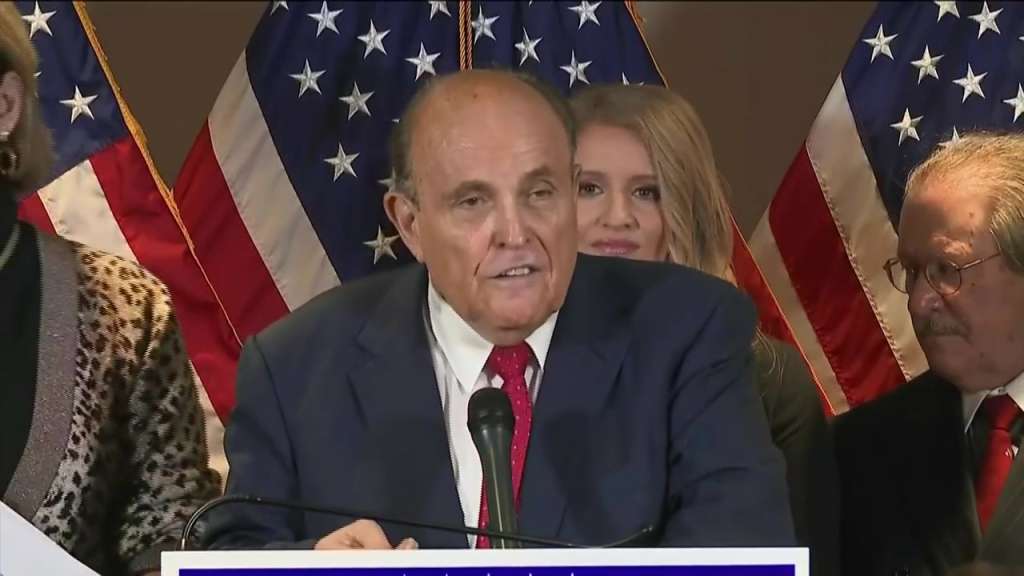 WASHINGTON (AP) — The question of whether to serve a search warrant for Rudy Giuliani’s records simmered inside the Justice Department in the waning months of the Trump administration, dividing officials in New York and Washington and remaining unresolved for a new leadership team to sort out.

The new crowd resolved it this week in dramatic fashion. On Wednesday, federal agents raided the home and office of former President Donald Trump’s personal attorney, collecting phones and computers as part of their probe into whether he broke U.S. lobbying laws by failing to register as a foreign agent related to his work.

It’s not clear exactly why Justice Department officials chose this particular moment to strike, but it wasn’t out of character for the agency under new Attorney General Merrick Garland. The move was just one in a series of headline-making decisions by a department moving quickly to assert itself in investigations and policy setting.

In the past two weeks, President Joe Biden’s attorney general has also made good on a promise to amplify the department’s civil rights focus, announcing sweeping investigations into police departments in Minneapolis and Louisville as well as hate crime charges against three Georgia men in connection with the killing of Ahmaud Arbery.

The FBI action in New York on Wednesday was especially notable both because of the high-profile nature of the Giuliani investigation and because of the vigorous debate the search warrant question had produced inside the Trump-era Justice Department.

Prosecutors in New York wanted last fall to serve a warrant on Giuliani as part of an investigation into whether he had failed to register as a foreign agent over his dealings with Ukrainian officials. But that request was rebuffed by officials in the deputy attorney general’s office in Washington. In a dispute over investigative tactics, they raised concerns both before and after the election and did not sign off on a warrant, multiple people familiar with the matter have said.

A new leadership team under Garland apparently reached a different conclusion, though it is not clear on what grounds. The new deputy attorney general, Lisa Monaco, and John Carlin, her top deputy, have both previously led the department’s national security division — which is responsible for enforcing the Foreign Agents Registration Act, or FARA — and will presumably be engaged in the investigation as it moves forward.

Former Justice Department official David Laufman said it would be reasonable for the new leadership team to reassess how legal actions were made, especially if they believed the previous administration reached an incorrect decision “on an important investigative action in a matter of considerable importance.”

Stuart Gerson, who served as acting attorney general in the first weeks of the Clinton administration before Janet Reno was confirmed, said it is common for new leaders to make big decisions when they take their positions.

“You’ve got a briefing book on your desk of issues — if you didn’t know them before, you know them now,” Gerson said. “Whatever your philosophy is, you see some of these things as directly important to satisfying a public need.”

To obtain the warrants from a judge, prosecutors would need to present probable cause that Giuliani had broken the law. He has denied all wrongdoing and sought Thursday to discredit the investigation.

Investigators specified that they were conducting a FARA investigation, said Giuliani’s lawyer, Robert Costello. At least one warrant also seeks information related to Marie Yovanovitch, the former U.S. ambassador to Ukraine who was ousted from her job two years ago on Trump’s orders.

Yovanovitch was a central player in the first impeachment case against Trump and detailed a smear campaign by Giuliani and other Trump allies that preceded her 2019 removal from the job.

The fact that the warrant makes mention of Yovanovitch, and that it seeks communication between Giuliani and several Ukrainians, suggests authorities are attempting to determine whether Giuliani’s efforts to remove the ambassador were at the behest of Trump or of Ukrainians. That distinction matters because federal law requires anyone lobbying the U.S. on behalf of a foreign country or entity to register their work with the Justice Department.

Giuliani, the 76-year-old former New York City mayor once celebrated for his leadership after 9/11, has been a staunch supporter of Trump, and fronted his failed legal effort to overturn the election, falsely claiming it had been a massive effort by Democrats to rig the results, even though election officials of both political parties and Trump Attorney General William Barr said there was no widespread election fraud.

Giuliani was also deeply involved in efforts to encourage Ukraine to find damaging information about Biden in the run-up to the 2020 election, meeting with a Ukrainian lawmaker whom U.S. officials have described as an active Russian agent and who released audio recordings during the 2020 presidential campaign in an effort to discredit Biden’s candidacy.

Giuliani also pushed hard for the ouster of Yovanovitch, whose departure was one of the pivotal issues of the first Trump impeachment case. Yovanovitch, a career diplomat who served for decades under both Republican and Democratic presidents and was first appointed by Ronald Reagan, testified in chilling detail during the impeachment proceeding about a “smear campaign” against her by Giuliani and others.

Major decisions still await at the Justice Department in other high-profile but unrelated investigations that Garland inherited from the Trump administration, including a tax probe into President Joe Biden’s son, Hunter, and a investigation into potential sex trafficking and public corruption by Florida Rep. Matt Gaetz.