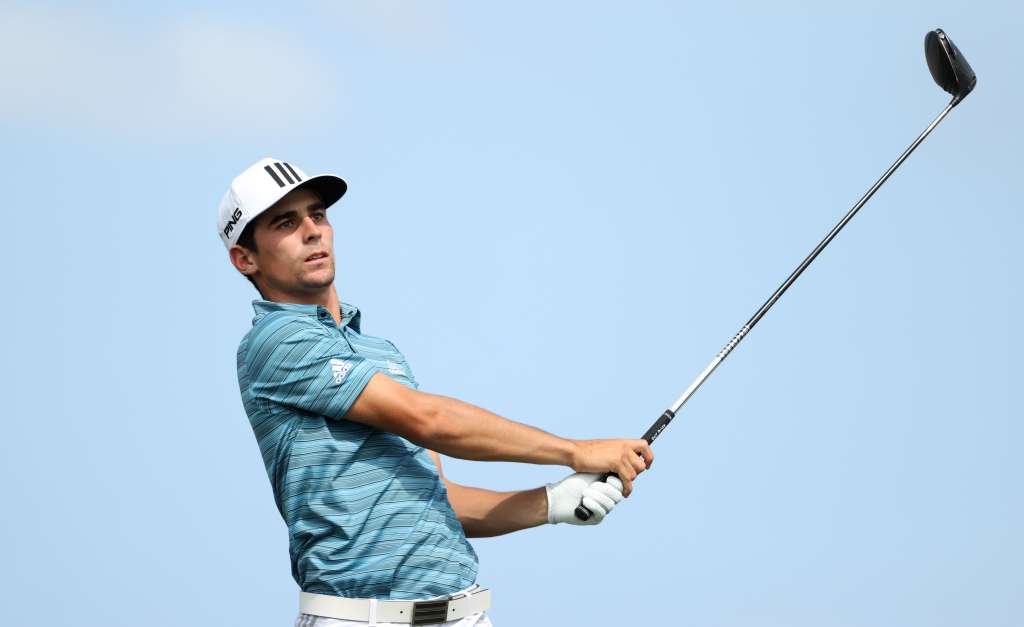 PALM BEACH GARDENS, FLORIDA - MARCH 19: Joaquin Niemann of Chile plays his shot from the tenth tee during the second round of The Honda Classic at PGA National Champion course on March 19, 2021 in Palm Beach Gardens, Florida. (Photo by Cliff Hawkins/Getty Images)
CNN

(CNN) — Since announcing himself on the world stage with a PGA Tour victory as a rookie in 2019, Chile’s Joaquin Niemann has established himself as one of golf’s most exciting prospects.

It’s been a whirlwind six months on the course for the Santiago native and a series of outstanding results have seen the 22-year-old break into the world’s top-30 for the first time.

It’s events at home in Chile, however, that will define this past year for Niemann.

“My cousin was born in October and in the beginning, it was amazing,” Niemann tells CNN Living Golf’s Shane O’Donoghue.

However, joyful video calls home to celebrate the arrival of a new family member were short lived.

“After a couple of weeks, we found out that he had a really rare disease … in the beginning, we had no idea what it was and over time, we figured out that it was bad.”

Niemann’s new-born cousin, Rafita Calderon, had been diagnosed with Spinal Muscular Atrophy (SMA), a rare inherited disorder stemming from a defective gene that leads to the death of nerve cells responsible for moving muscles that allow us to walk, talk, breathe and swallow, according to the National Institute of Neurological Disorders and Stroke.

As many as 1 in 8,000 babies is estimated to be affected by one of the genetic mutations that causes it. That includes about 450 to 500 infants in the US per year, according to a Novartis — the parent company which markets Zolgensma — statement.

The treatment works by replacing a working copy of the defective gene into the nerve cells before they die and symptoms develop.

“We started getting really worried about it and a little desperate because the only medicine and the only cure to help him live for more than two years would cost $2.1 million — we were going out of our minds,” explains Niemann.

With Calderon’s father leading the fundraising efforts in Chile, the country’s best-known golfer set about doing everything he could from his home away from home, the PGA Tour.

“Rafita started getting a lot of attention on social media in Chile and they made a lot of money, but it still wasn’t enough, so I decided to start donating money during golf tournaments,” says Niemann.

Initially donating $5,000 per birdie and $10,000 per eagle on top of the $152,450 he earned at the RSM Classic in November, by the time December’s Mayakoba Classic rolled around, news of Niemann’s fundraising efforts had spread and fellow tour pros including the likes of Justin Thomas and Rickie Fowler could be seen sporting white ribbons in support of the cause.

“To get so much support from the PGA Tour, from the players and on social media was amazing. Now we’re in March and we got the medicine a month ago, it feels amazing to achieve something like that,” said Niemann.

“With one shot he can create the protein to get muscles, he’s doing a lot better now and he can move … so hopefully he’ll be alright,” he says.

With thoughts elsewhere, Niemann could have been forgiven for losing focus on his game in recent months. However, with a series of excellent performances to start the 2021 season including a second place at The Tournament of Champions in January, he’s in the form of his life and has achieved a career-high ranking of 28.

Following his own path

Growing up in a country where football rules, it’s been an unlikely journey for the Chilean, but one he looks back on fondly

“I started playing when I was probably around two or three years-old … I had three plastic clubs that I would carry around my house all the time, I could barely walk and I was swinging these clubs,” he laughs.

It didn’t take long for Niemann’s natural talent to catch the attention of the Chilean Golf Federation and he earned a scholarship to the prestigious Athletic Study Centre in Santiago.

“There were a lot of soccer players, tennis players and I would only have school for around three hours from 8 a.m’-11 a.m. … After that, I was just going to the golf course to play, I think that was the time where I got really good.”

Niemann was soon earning invites to play overseas and began to rack up wins, reaching the top of the world amateur rankings in May 2017, a position he would hold for 44 weeks until he turned professional in 2018.

Walking into a PGA Tour locker room at the age of 19 could be a daunting prospect for any young player. Fortunately for Niemann, he shared an agent with Sergio Garcia, one of the most respected veterans on Tour and a Masters winner, who went out of his way to help the youngster settle in.

With the support of Garcia, it wasn’t long before the Chilean began to hit his stride. He earned an outstanding win in his rookie season in 2020, claiming the Greenbrier Classic by a remarkable six shots to become the youngest international winner on the PGA Tour since 1923.

With the 22-year-old now playing some of the best golf of his career, many are tipping the youngster to kick on and add to his PGA Tour win cabinet this season.

One tournament in particular this year stands out for the Chilean, who, like most of his compatriots, has an enormous sense of pride in his homeland.

“The Olympics, for me being from Chile is big. I don’t think everybody in golf looks at it the same way as I do, being from a small country, it would be huge for Chile to have a golf medal

“Having the opportunity to play in the Olympics and being able to win a gold medal would be a dream come true for me and my country,” he explains.

‘Chi, chi, chi, le, le, le, viva Chile!’ is a chant that has historically been reserved for the formidable national football team. With the entire country behind him and his star continuing to rise, don’t be surprised if this becomes the soundtrack to many a PGA Tour Sunday in the future.