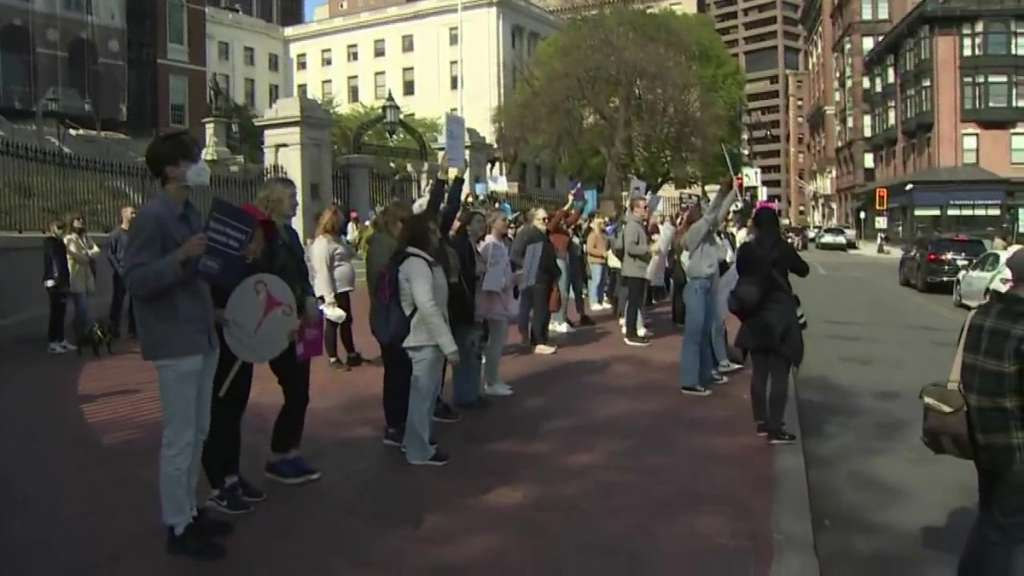 BOSTON (WHDH) - A group of pro-life and pro-choice protesters gathered at the State House on Mother’s Day after a draft of Supreme Court opinion that would overturn Roe v. Wade was leaked.

People on both sides of the issue have been gathering outside Beacon Hill since the news broke last week — all trying to make sure their voices are heard ahead of what may be a pivotal week in Washington DC.

Boston police say a 25-year-old from Allston was arrested during a tense moment at the protest. The suspect, whose name was not released is facing an assault with a dangerous weapon charge however, police said that is likely to get downgraded to simple assault because no contact was made.

“The best way to make a choice in this world is for mass movements, mobilizing and fighting for a better world for people,” said protestor Stevie Downie. “A lot of times, a lot of these politicians will act like they have your best interest in mind, and they turn around and break their promises.”

In Massachusetts, a 2020 law codified the right to an abortion in the Bay State but, this is not the case in all states. Democrats said they plan to bring legislation to the Senate floor this week that would codify abortion rights nationwide.

“This is the real deal and everyone’s eyes are on them,” said Senate Majority Leader Chuck Schumer.

In the evenly divided Senate, the bill known as the Women’s Health Protection Act would need the support of at least 10 Republican senators if all democrats are in favor. Schumer said that at this time, the vote is critically important.

“We must have this vote,” he said. “Every senator must show where he or she stands and on something as important as this. We’re not going to let anybody hide because America is on our side.

On the other side of the aisle, Senator Lindsey Graham is one of many speaking out in the hope that the nation’s highest court will move to overturn Roe v. Wade.