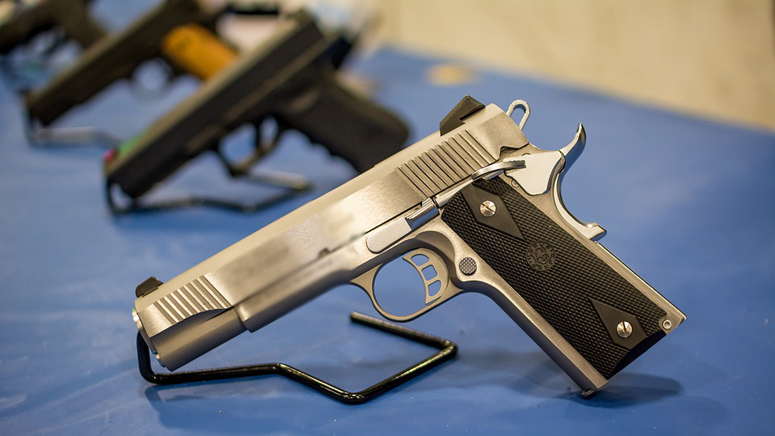 (CNN) — Gun sellers across the United States are reporting major spikes in firearm and bullet purchases as the coronavirus spreads across the country.

Pictures of long lines outside gun stores in California, Oklahoma and elsewhere have gone viral on social media.

The ammunition website Ammo.com said it has recorded an unprecedented surge in bullet sales over the last three weeks. Administrators for the site, which ships ammunition to all but four states across the nation, released sales figures late Monday night showing a 77% increase in website visits between February 23 and March 15. Those visits led to a 222% increase in transactions over the same period when compared to the first three weeks in February.

Revenue has increased 309%, according to the site, which said coronavirus fears are fueling the sales surge.

“The world has never seen anything like this and people want to make sure they’re prepared for whatever lies ahead, whether that be food shortages, government shutdown, or worse,” a spokesperson for Ammo.com said in an emailed statement. “When everything around you is uncertain, having a supply of ammunition can make our customers feel safer.”

Between 2016 and 2018, after the election of Donald Trump, the gun industry experienced a decline in firearms sales, dubbed the “Trump slump,” which insiders say is typical when Second Amendment-friendly Republicans control the White House and Capitol Hill.

But month-to-month gun sales rose steadily in 2019, a year after Democrats won back the House and presidential candidates like Beto O’Rourke proposed a mandatory gun buyback program to seize semi-automatic long guns such as the AR-15.

This year, the coronavirus has been an unanticipated boon to the gun industry.

“All the anecdotal reports are sales have really kicked up higher here the last week or two,” gun industry analyst Rob Southwick, founder of the market research firm Southwick Associates Inc, told CNN Business. “Whenever there’s a period of uncertainty — 9/11, the stock market crash of ’87 — firearm sales go up.”

Federal law requires anyone purchasing a gun from a licensed firearms seller in the United States to pass a criminal background check, which is submitted to the FBI’s National Instant Criminal Background Check System (NICS).

Mark Oliva, director of public affairs for the National Shooting Sports Foundation, a trade association for the gun and ammo industry, routinely speaks with gun merchants across the United States. He said the rise in gun sales is nationwide and that coronavirus has sparked a pattern of panic buying and hording firearms and ammunition.

“I think everybody’s a little bit concerned and they’re still buying while they can, while it’s available,” he said.

Texas leads the nation in Ammo.com sales per capita, according to the website, which noted states and regions where the number of confirmed coronavirus cases are the highest have experienced the largest gun and ammo sales spikes.

In Delaware, sales rose a whopping 4,529% over the last three weeks, the website said.

A sales associate at Bullseye Tactical Supply, a gun and ammunition store in Woodbridge, New Jersey, said purchases have been up about 40% amid the coronavirus pandemic.

“Everyone, they want to have protection in case something happens,” the salesperson, who asked to remain anonymous, told CNN Business over the phone Tuesday afternoon. “There’s just an overall feeling of fear of being stranded or having to be isolated to protect their home if, God forbid, supplies become limited and people start looting.”

In Mt. Vernon, New York, which sits 17 miles north of New York City, Michael Timlin, 50, owner and operator of the Smoke N Gun Shop, said he saw a 50% increase in foot traffic over the weekend.

“Saturday was one of our biggest sales days,” Timlin told CNN Business. “The only problem is the supply is running low. We’re bound to what we can get.”

Timlin said most of the increased traffic he’s seen has been new customers who’ve never owned a firearm before.

“When the vicious coronavirus comes knocking at your door, you’re getting [a gun],” he said.

The most popular gun tends to vary by shop and by state, according to firearms dealers. Bullseye Tactical Supply’s staff in New Jersey said the AR-15 has been in high demand. In Ohio, an open-carry state, moderately priced handguns like the Taurus P2 111 G2C seem to be the weapons of choice, according to Daryl Upole, a licensed gun dealer based in the rural town of Ashtabula, which sits 56 miles northeast of Cleveland.

“The distributors are all sold out of that model,” Upole told CNN Business on Monday.

Gun laws can vary greatly from state to state.

In New York, where counties require residents to obtain a license to carry a handgun, the most popular firearms purchase has been shotguns, according to Timlin.

“The shotgun is one of the easier firearms to use and understand,” Timlin said. “It’s the best choice to make if someone was trying to harm you because of the way it functions.”

Ammo.com said that 40 caliber Smith & Wesson handgun bullet sales have risen 645% recently, making them the most popular item sold on its website since the coronavirus started making national headlines earlier this year.

The reports of increased gun sales at a time when many K-12 schools have closed across the country have some concerned about the safety of children with potential access to their parents’ new firearms.

“I’m hopeful the people who are buying guns are going to store them securely,” Watts told CNN Business. “People need to wash their hands and lock up their guns.”