Harris, Walsh to meet with Amazon Labor Union and other grassroots organizers 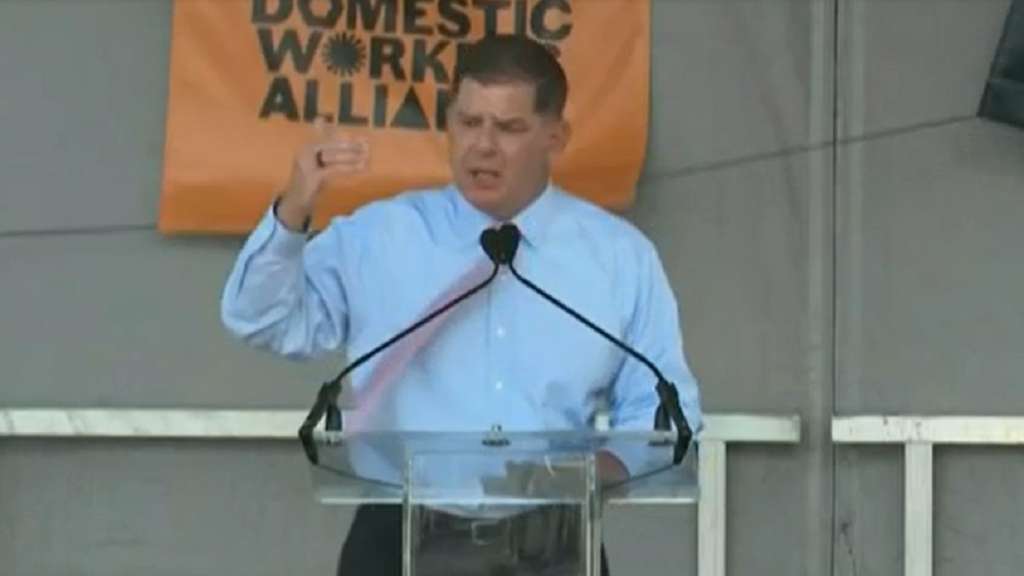 The meeting, which will take place at the White House, will also involve grassroots labor organizers representing employees from Starbucks and the outdoor equipment retailer REI, among others.

The news of Christian Smalls’ meeting with key Biden administration officials marks the latest recognition of Amazon Labor Union and Smalls’ organizing, sharply contrasting with the light Amazon once tried to cast on him and his efforts. Smalls was fired two years ago from the New York City warehouse that he recently helped unionize following his participation in a walkout over the company’s pandemic response. An executive at Amazon once suggested undercutting his organizing efforts by painting him as “not smart, or articulate.”

Asked for comment, Smalls said “there’s a lot of work we need to do to improve the labor laws in this country so that workers are protected while organizing.” He added that he “looks forward” to visiting the Senate, but he did not say whether he would be attending meetings or if so with whom.

Amazon Labor Union has organized two union elections, both held in Staten Island in recent weeks. The first resulted in a milestone win at the company’s JFK8 warehouse, which employs more than 8,000 people. It was the first time a group of Amazon’s US workers have successfully unionized in its 27-year history. It was an achievement by many measures including that the effort wasn’t led by an established union but rather by a group of current and former warehouse employees in the area.

Asked about the remarks, White House Press Secretary Jen Psaki later told reporters Biden was not suggesting the US government was about to get involved in worker organizing efforts.

“What he was conveying is that — is his longtime support for collective bargaining, for the rights of workers to organize, and their decision to do exactly that in this case — something that he has long supported broadly over the course of his career,” Psaki said.

On Tuesday, the White House official reiterated that the administration’s position is that workers should be free to decide for themselves whether to unionize and that they should not be intimidated, threatened or coerced during the decision.

The second Amazon union election — held just weeks after the first at a smaller facility known as LDJ5, which is just across the street from JFK8 — resulted in workers voting against unionizing. The results were tallied Monday.

Leaders of the Democratic party, including President Biden, had acknowledged an earlier attempt by an established labor union to organize Amazon warehouse workers in Bessemer, Alabama, one year prior. (The results of the first Bessemer union election were tossed after an National Labor Relations Board regional director found Amazon illegally interfered; the results of the reelection remains too close to call.)

In a statement, Amazon spokesperson Kelly Nantel said the company is “glad that our team at LDJ5 were able to have their voices heard. We look forward to continuing to work directly together as we strive to make every day better for our employees.”

The White House invitation comes after Senator Bernie Sanders last week called on President Biden to sign an executive order to prohibit companies that violate labor laws from contracting with the government. “As you may know, Amazon, one of the largest and most profitable corporations in America, is the poster child as to why this anti-union busting Executive Order is needed now more than ever,” wrote Sanders, who two days earlier rallied with Amazon workers on Staten Island ahead of the LDJ5 vote.

When ALU had collected enough signatures to hold its first union election, a spokesperson for Amazon cast doubt on the legitimacy of the signatures. One week after the ALU’s decisive victory, Amazon laid out a number of objections to the previous Staten Island union vote and called for the results to be tossed and a new election held. A hearing on the objections is scheduled for later this month.

For its part, Amazon has repeatedly said in statements that its “employees have always had the choice of whether or not to join a union,” but, as Sanders pointed out in his letter last week, it also spent more than $4 million last year on anti-union consultants. In addition, Amazon used a combination of texting, on-site signage and mandatory meetings to urge workers to vote against unionizing. The latter, while a common tactic used by many employers, is the subject of a recently issued memo by NLRB General Counsel Jennifer Abruzzo calling for the agency to reconsider its stance on mandatory meetings of this nature. (Amazon previously declined to comment on Abruzzo’s memo.)