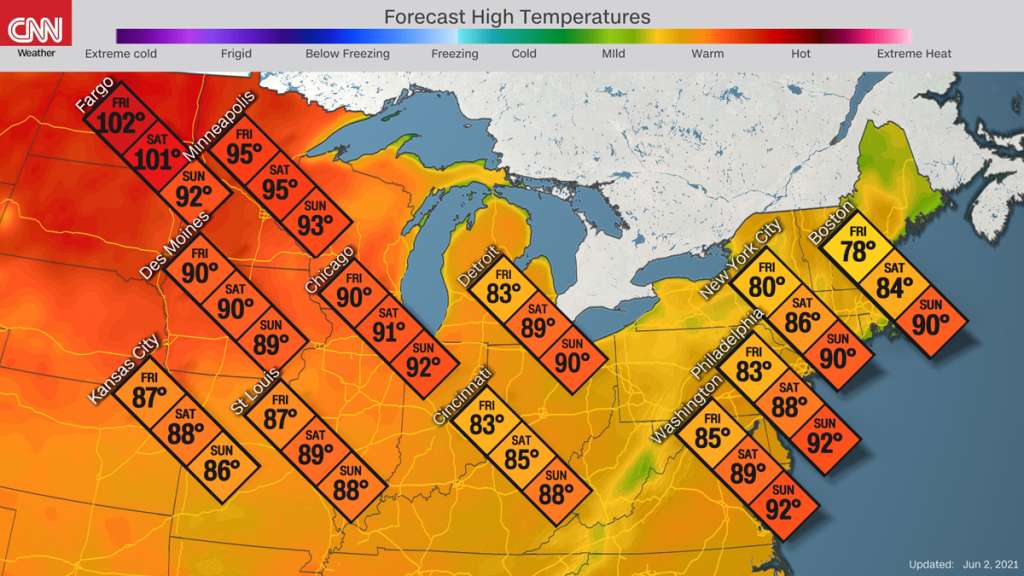 (CNN) — While the West has been scorching this week, the heat is on the move. As this heat wave pushes east, more than 160 records could be broken by the end of the week.

Heat warnings and advisories extended Wednesday from the California/Mexico border to Canada, where the heat will remain for much of the West. “Extreme heat in these locations will significantly increase the potential for heat related illnesses,” says the Weather Prediction Center (WPC).

“Additionally, much of the Southwest and West is experiencing severe to exceptional drought conditions, which will undoubtedly be exacerbated by the current heat wave,” adds the WPC.

Highs could approach 110° in Las Vegas and close to 120° for Death Valley.

“High temperatures are forecast to reach the upper-90s and triple digits across a wide spanning region from the Desert Southwest to the northern High Plains,” predicts the WPC.

Dozens of records could fall in Idaho, as well as eastern Oregon and Washington.

“The largest temperature anomalies compared to average will be situated over interior sections of Oregon and Washington, where high temperatures are forecast to soar to near 30 degrees above the normal high for this time of year,” says the WPC.

As temperatures start to fall in the West, they will be on the rise in the Midwest. The Midwest and northern Plains will get a touch of that heat, then rising even more Thursday.

Highs will run 10-15 degrees above normal. Highs will be in the upper 80s today for Fargo and Minot, with the heat rising through the rest of the week, with highs near 100° by Friday.

This tropical air mass will remain in place for the Midwest “resulting in high temperatures reaching the low to mid-90s in central Minnesota and western Wisconsin and as high as upper-90s in western Minnesota,” says the National Weather Service in Twin Cities, Minnesota.

Grand Rapids, Michigan, could hit 90° on Friday and International Falls, Minnesota, could reach 93°; if so, both locations would break records.

Low temperatures will also be on the warm side.

“An important but less obvious impact of this heat wave will be overnight low temperatures in the low to mid-70s, which is close to where we have sat for highs for the past couple of weeks,” says the NWS Twin Cities.

How hot will it be in your location? Find out here >>

As the heat pushes into the Northeast by the weekend, New York City could see its first 90-degree day of the year. Even Boston could see temperatures in the upper-80s to low-90s by the end of the weekend, beginning its first heat wave of the season.

By mid next week, the Northeast should start to see temperatures falling, returning to more normal highs for early June.