Here’s how close the US is to a possible COVID-19 surge, expert warns 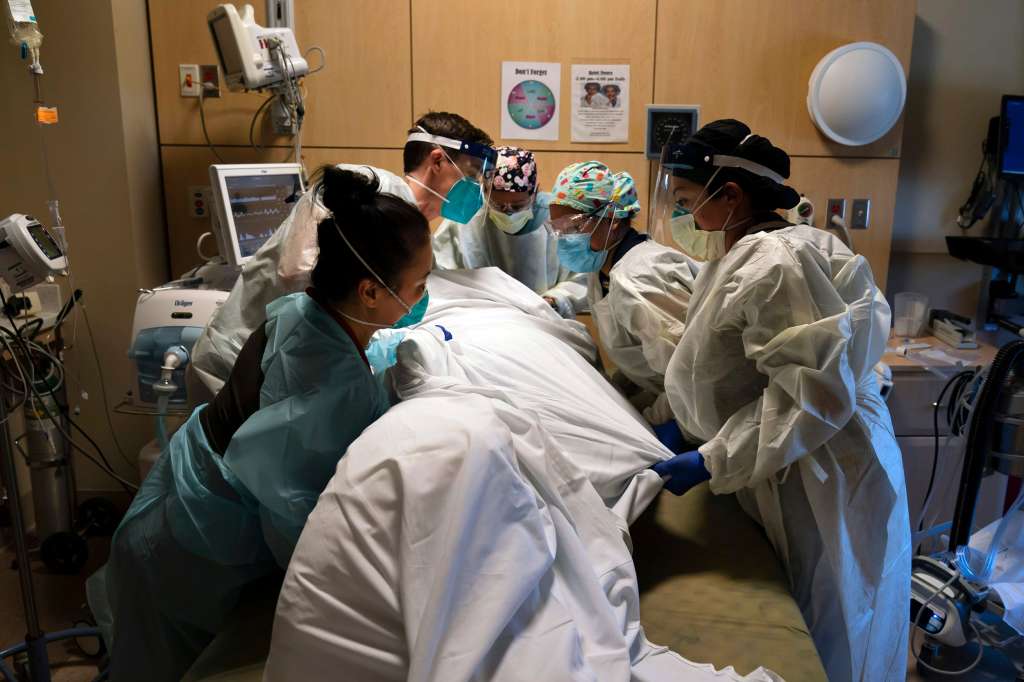 (CNN) — The US is in the “eye of the hurricane” right now, according to epidemiologist Michael Osterholm.

After months of devastation, it appeared things were heading in the right direction with officials reporting several weeks of steep declines in Covid-19 cases and lowered hospitalization numbers.

But now case declines have stopped and infection numbers plateaued at very high levels — with the US averaging roughly 60,000 new cases daily in the past week. Multiple governors have eased Covid-19 safety measures despite health officials’ warnings. Spring break events are kicking off across the country, threatening the potential for further spread of the virus.

Experts project the country is about to see another dangerous Covid-19 spike. One that Osterholm says will be fueled by the B.1.1.7 variant, first spotted in the UK, and will come over the next six to 14 weeks.

“Four weeks ago, the B.1.1.7 variant made up about 1 to 4% of the virus that we were seeing in communities across the country. Today it’s up to 30 to 40%,” Osterholm, who is the director of the Center for Infectious Disease Research and Policy at the University of Minnesota, told NBC’s “Meet the Press” on Sunday.

While there are multiple variants of coronavirus circulating in the US, experts have been particularly concerned with the highly contagious B.1.1.7 variant’s dangerous potential.

In mid-January, the Centers for Disease Control and Prevention warned cases of the variant were likely to see “rapid growth in early 2021,” adding it would likely become the predominant variant in the US by this month.

So far, the agency has reported more than 2,600 known cases of the variant across 46 states, Puerto Rico and Washington DC. Nearly a quarter of those cases are in Florida. But the CDC has said that likely does not represent the total number of such cases in the US — but rather just the ones that have been found by analyzing positive samples, with the help of genomic sequencing.

Infectious diseases specialist and epidemiologist Dr. Celine Gounder told CNN Sunday she was on an emergency meeting a group of experts held on Christmas Eve to discuss the variant.

“We’ve been tracking it very closely since then,” she said. “Where it has hit in the UK and now elsewhere in Europe, it has really been catastrophic. It has driven up rates of hospitalizations and deaths and it’s very difficult to control.”

New research shows that in the US, the variant is 59% to 74% more transmissible than the original novel coronavirus. Gounder says cases in the US are “increasing exponentially.”

That’s why it’s crucial for the country to keep pushing to lower Covid-19 infections. Vaccination numbers are still not high enough — and won’t be high enough in several weeks’ time — to help suppress the predicted surge, experts warned.

“This is sort of like we’ve been running this really long marathon, and we’re 100 yards from the finish line and we sit down and we give up,” Gounder said on Sunday. “We’re almost there, we just need to give ourselves a bit more time to get a larger proportion of the population covered with vaccines.”

‘This is not just about personal choice’

But just in the first week of March, multiple governors announced they were loosening restrictions put in place to help curb the spread of the virus.

Texas Gov. Greg Abbott announced he was lifting the statewide mask mandate and would allow businesses to reopen at 100% capacity, starting Wednesday. Mississippi Gov. Tate Reeves made a similar announcement, saying he was doing away with county mask mandates and capacity limits for businesses.

On Sunday, Reeves defended his decision, saying that trying to entirely rid the state of Covid-19 cases would be an unrealistic goal, and the Covid-19 numbers officials were concerned about had all decreased.

“We have to get our economy rolling so that individuals can get back to work, and I think that’s critically important,” he said.

And even without mask mandates, the governor said he recommends and “strongly” encourages residents to wear masks.

Dr. Ashish Jha, dean of the Brown University School of Public Health, told ABC the responsible thing for states to do is to keep mask mandates in place.

“When you wear a mask you’re not just protecting yourself, you’re protecting people around you,” he added.

Less than 10% of Americans fully vaccinated

Health officials say a more appropriate time for states to begin easing restrictions would be when daily Covid-19 cases are way down — “considerably less” than 10,000, according to Dr. Anthony Fauci — and vaccination numbers are way higher.

So far, more than 58.8 million Americans have received at least one dose of a Covid-19 vaccine, according to CDC vaccination data.

More than 30.6 million have received two doses, the data shows. That’s roughly 9.2% of the US population.

But officials are hopeful vaccinations will continue ramping up in the coming months with the help of increased supply.

Andy Slavitt, a senior adviser to the White House Covid-19 response team, said on MSNBC Sunday there will be more than enough vaccines produced for every adult by the end of May. The President also said last week the US will have enough vaccines for every adult American by the end of May — speeding up the administration’s previous goal by two months.

Slavitt added that vaccines are now going from factories to arms “very, very quickly,” and that the country is getting more efficient at administering the doses.

And the country’s high school students could be vaccinated by the fall, according to Fauci, while younger students will likely have to wait a little longer.

“Right now the tests are being done to determine both safety and comparable immunogenicity in high school students,” Fauci told CBS’s “Face the Nation” on Sunday. “We project that high school students will very likely be able to be vaccinated by the fall term, maybe not the very first day, but certainly in the early part of the fall for that fall educational term.”