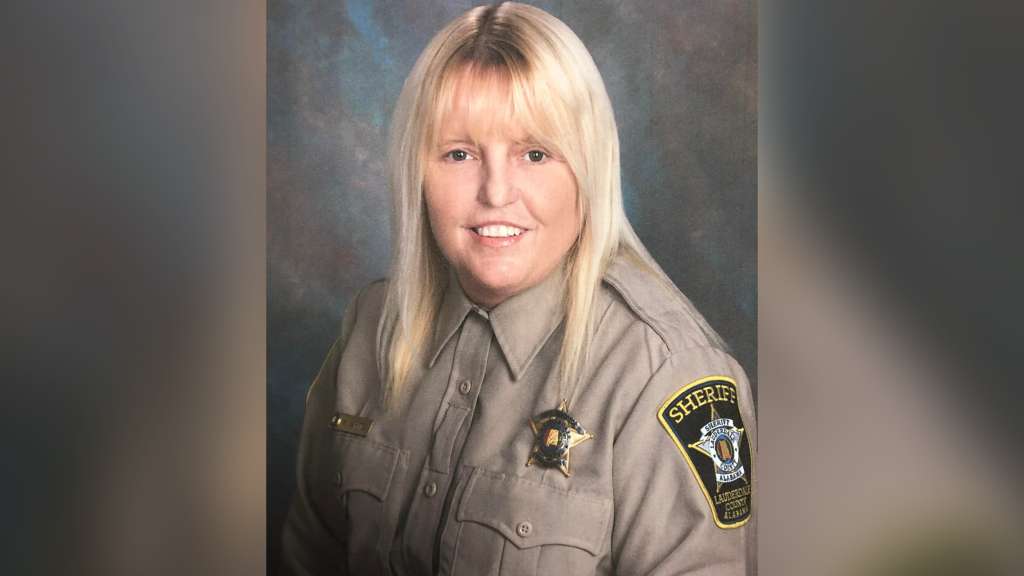 (CNN) — Newly released audio of a 911 call that officials say fugitive Alabama corrections officer Vicky White made during a chaotic car chase in Indiana Monday gives insight into the seconds leading to her death and the capture of inmate Casey White. But it also adds to the many questions that remain unanswered.

Authorities say they preliminarily believe Vicky White fatally shot herself in the head after the car the pair were in wrecked while being pursued by law enforcement in Evansville, Indiana. Vicky White was accused of letting Casey White, a murder defendant, out of an Alabama jail in late April and going on the run with him for 11 days.

Vicky White’s 911 call released by Evansville officials Wednesday — in which her apparent voice can generally be discerned clearly only in the first 31 seconds — doesn’t appear to shed much light on how, or even precisely when, she was shot.

As officers were chasing a Cadillac driven by Casey White on Monday afternoon, they rammed the Cadillac into a ditch, and the vehicle rolled over, authorities said. Investigators believe Vicky White shot herself “once the vehicle crashed,” said Dave Wedding, sheriff of Indiana’s Vanderburgh County, on Tuesday. He said a coroner would confirm whether that belief is correct.

The 911 audio appears to start near the end of the chase. It begins with someone saying something indiscernible, and the dispatcher saying “Evansville 911.” No one appears to address the dispatcher, who says, “911” and “hello” seemingly without being answered.

Instead, a woman’s voice — which authorities say is Vicky White’s — is heard within the first six seconds saying things including, “Stop,” and “Wait, stop … air bags going to go off and kill us.”

Twelve seconds in, a loud noise is heard — the first of at least four loud noises to happen in about 15 seconds. It’s unclear in each instance what the noises represent, and it’s unclear from the audio when the car was rammed, when it rolled over, and when a gun was fired.

“God,” the woman says after the first noise. “Air bags are going off. Let’s get out and run.” She mentions a hotel.

The second noise is heard, and the woman shrieks. At least two more noises come, followed — now 30 seconds into the tape — by another shriek.

For the next 30 seconds, generally only muffled sounds of sirens are heard. A minute into the recording, a soft voice is heard — perhaps a moan — but it’s not clear whose voice it is.

Shortly after, distant voices are heard, along with occasional movement, though it’s unclear whether that’s inside or outside the vehicle. About one minute and 40 seconds into the recording, someone starts repeatedly saying phrases like “she is breathing” and “got a gun in her hand.”

The phone line stays open as officers work to get the pair out of the vehicle.

Vicky White, 56, was transported to a hospital, where she died, the US Marshals said. Casey White, 38, was taken into custody and transported back to Alabama.

The escaped inmate and corrections official fled from Lauderdale County, Alabama, on April 29. Authorities say Vicky White, who was then the assistant director of corrections at the county jail, checked Casey White out of the detention center under the pretense of taking him to a courthouse.

Investigators believe the two fostered a romantic relationship while Casey White, who was normally housed in a state prison, was periodically transferred to the Lauderdale County jail to attend hearings related to the 2015 stabbing death of Connie Ridgeway, for which White is facing capital murder charges. The county sheriff has said the two maintained communication when he was transferred back to state prison.

Their escape together ignited an 11-day manhunt which spanned multiple states and captured widespread national attention. Though the search for them has ended, questions remain about the circumstances of Vicky White’s death and the future Casey White now faces.

How was Vicky White shot?

It’s unclear from the 911 audio how Vicky White sustained the gunshot injury and a coroner’s report has yet to be released.

In dispatch audio from Evansville police released earlier this week, the dispatcher can be heard advising law enforcement units “we could hear her on the line saying she had her finger on the trigger.”

The 911 recording does not appear to reveal Vicky White mentioning a gun or her finger on a trigger. However, other people in the recording — presumably responding officers — can be heard saying her finger was on the trigger when they found her.

No law enforcement officers fired any shots during the chase, according to Lauderdale County Sheriff Rick Singleton.

When officers pulled Casey White out of the car and took him into custody, he reportedly told them to help “his wife” who had shot herself in the head and insisted he didn’t do it, according to US Marshal Marty Keely, who said to their knowledge, the pair was not married. Authorities previously said the officer and inmate were not related.

Casey White indicated he intended to have a shootout with law enforcement if his car had not been rammed into a ditch, Vanderburgh County, Indiana, Sheriff Dave Wedding said Tuesday, citing White’s interviews with investigators after his capture.

“(Casey White) said he was probably going to have a shootout, at the stake of both of them losing their lives,” Wedding said.

What will happen to Casey White?

Casey White was returned to Alabama Tuesday night to attend an arraignment in Lauderdale County.

Judge Ben Graves told White at the hearing he will be charged with escape in the first degree, in addition to capital murder charges he was already facing related to Ridgeway’s death. White allegedly confessed to killing her but later pleaded not guilty by reason of insanity, authorities said.

After the hearing, White was transferred directly to the William E. Donaldson Correctional Facility, a state prison in Bessemer, Alabama, a little more 100 miles south of Lauderdale County.

White was already serving a 75-year sentence for a series of crimes he committed in 2015, including a home invasion, carjacking and police chase, according to the US Marshals Service.

White’s murder trial is currently set for June. During Tuesday’s court appearance, White’s attorney, Jamy Poss, said he would be filing a change of venue motion, which the judge said he would consider.