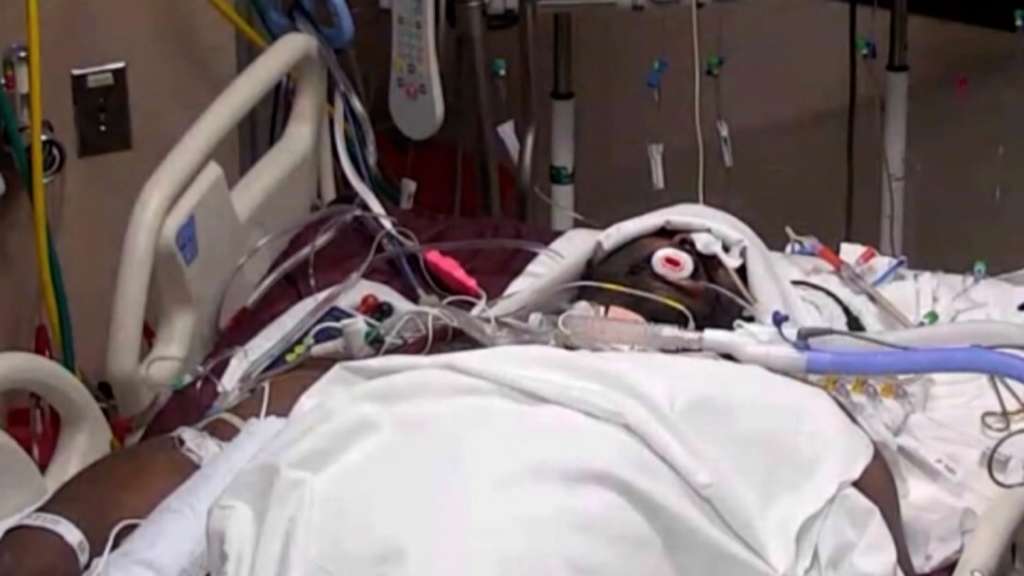 Three unvaccinated Covid-19 survivors and an intensive care unit nurse speak about the toll the virus has taken in new ads released by HHS. Credit: HHS

In a set of emotional advertisements releasing Wednesday morning, three unvaccinated Covid-19 survivors and an intensive care unit nurse speak about the toll the virus has taken.

It’s a sharp turn from earlier ads, which used positive messages — protecting the community, getting back to normal activities, reuniting with friends — to convince hesitant Americans to roll up their sleeves.

Public opinion experts praised the advertisements, saying it was time to take a new approach — one that uses the death and misery many Americans are witnessing firsthand.

“Real experiences, more than information, seem to be moving people, and here we have these messages enforcing that real experience,” said Drew Altman, president and CEO of the Kaiser Family Foundation, which tracks public opinion on vaccination.

Kaiser’s recent polling has found that knowing someone who became seriously ill from Covid-19 or died from the virus are among the most powerful factors motivating vaccine hesitant Americans to take a shot.

The ads are part of a $250 million Covid-19 public education campaign by the US Department of Health and Human Services.

“We believe these first-person accounts of people who’ve experienced Covid firsthand can really underscore the danger that COVID-19 poses,” said a senior HHS official involved with the ad campaign. “[It’s] really changing the messenger. We’re letting real people tell their own stories in their own words.”

‘They gave me a five percent chance of living’

The first set of HHS’s Covid-19 vaccination ads debuted in April and were professionally shot and featured heartwarming scenes of friends hugging and children together on sleepovers, with upbeat music playing in the background.

“Go on and live as you want, feel the sunlight on your face,” the singer croons in one ad, as text appears on the screen: “After a year of saying no, imagine how good yes is going to feel.”

While that might have convinced some people to get vaccinated, it didn’t work for everyone. Vaccination rates started to lag last spring, and currently nearly 1 in 4 eligible Americans still has not had a Covid-19 vaccination, according to the US Centers for Disease Control and Prevention.

The new batch of ads is much rougher.

The HHS official said their recent research shows that testimonials from people affected by Covid-19 appeal to the unvaccinated, and so they went on social media and found selfie videos from two survivors and an intensive care unit nurse.

“I’ve been in the hospital for 76 days now,” says a man name Terrell from St. Louis. He wears a hospital gown and has a canula supplying oxygen to his nose, as the ad cuts to images of him lying lifeless in a hospital bed covered with wires and tubes. “They gave me a five percent chance of living.”

“Two months ago, I contracted the Delta variant of Covid-19.  I haven’t been the same man since,” a man named Kole from Monett, Missouri, says in his selfie video.

Felicia, an ICU nurse from Shreveport, Louisiana, tears up as she talks about caring for young people with Covid-19.

“The Delta wave that we’re seeing now — people are younger and sicker and we’re intubating and losing people that are my age and younger,” she says.

The ads feel raw, and there’s no peppy music.

“Our direction to the creative team was not to not to improve them, to not take the shake out of the camera,” the HHS official said. “The reason for that is because we wanted these to be as authentic as possible.”

HHS did send a film crew to one of the Covid-19 survivors. The fourth ad features Amanda in Richwood, Ohio, and shows her at home with her family.

“I got COVID, I was intubated, and in a coma for 11 days,” she says directly to the camera. “I did not get the Covid vaccine. I was concerned about some of the side effects. However, if I had it to do over, I would definitely go get the Covid vaccine. I know that I was very close to death. The fact that I almost did not come home to my husband and to my children is terrifying.”

Choosing the approach that resonates

In any public health campaign, the creators have a choice: feature the benefits of a particular intervention, such as vaccination, or feature the consequences of not using that intervention.

For many months, the news media has featured stories of unvaccinated people who became ill with Covid-19 and regretted their decision, or stories of family members who lost unvaccinated loved ones to the virus.

But the HHS official said research earlier this year showed this was not the best approach for motiving vaccine hesitant Americans.

“We have to make sure that if we’re putting a piece of creative, a piece of information out into the world, that we’re not going to make the situation worse,” the official said. “As people are making up their mind about something, the use of fear can actually work both ways.”

Lori Freeman, the CEO of the National Association of County and City Health Officials, says she thinks these ads will have an impact, given what she’s heard from her members, who have been on the ground for months trying to convince vaccine hesitant Americans to roll up their sleeves.

“I think this resonates more than ‘let’s sing kumbaya together and go to a concert together,’ ” Freeman said. “It’s a better approach to say ‘this is what you need to do to keep yourself alive’ rather than ‘this is how to help the world.’ “