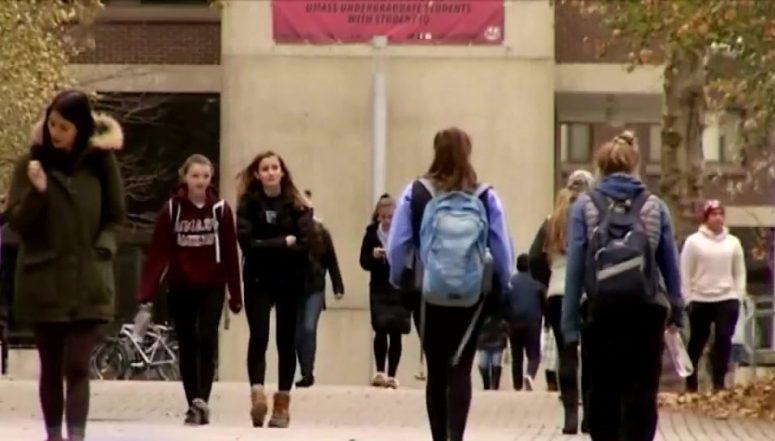 Massachusetts Teachers Association Vice President Max Page opened up his testimony before the Higher Education Committee Tuesday by sharing his screen with lawmakers, displaying a photo of the fine arts center at UMass Amherst.

Page said the 646-foot-long Brutalist building was constructed with state money in the late 1960s and early 1970s, and that with its indoor spaces elevated above the ground it “literally lifted up on a pedestal the arts for working class students.”

Page was one of several speakers to make the case to the committee that graduating without debt was once the norm for public college and university graduates and to ask the legislators to return to a model where students shouldered less of the cost burden.

“We’re not inventing the utopian world of the future,” he said. “We’re simply going back to the future, in a way. We’re trying to reclaim what we had.”

Bills before the committee propose various approaches to helping students pay for college, including MTA-backed bills that would create a free-college grant program and that would steer $500 million in additional state dollars into public higher education over five years.

Referred to by its supporters as the Cherish Act, the $500 million bill would also freeze tuition and fees at public colleges and universities through fiscal 2026. It aims to bring per-student state funding for public higher education back to its 2001 level.

“This has contributed to higher tuition and fees and really crushing student debt,” she said.

Comerford, a Northampton Democrat who serves as vice chair of the Higher Education Committee, said 90 of the Legislature’s 200 members have signed on as co-sponsors.

Senate Chair Anne Gobi told Comerford that she and her House counterpart, Rep. David Rogers, elected to hold a hearing on the bill “early” this term “to show how committed we are to working on this bill and working with you and understanding the importance of what we can do for students across Massachusetts.”

“Last session, we had a lot of hopes for this Cherish Act,” Gobi said.

In late December 2020, the waning days of the last legislative session, the Higher Education Committee included the House and Senate versions of the Cherish Act in study orders, effectively killing them.

Bills from Sen. Jamie Eldridge and Rep. Natalie Higgins, which would create a grant program to cover the full cost of tuition and fees for Massachusetts residents attending state colleges and universities or certificate, vocational or training programs at public institutions, met the same fate last year.

The two Democrats pitched the committee on the re-filed version of their bill (H 1339, S 829). Higgins said a new feature this time around is that income-eligible students would also receive additional grants to pay for costs like housing, textbooks and transportation.

Higgins said the state’s MASSGrant financial aid program could cover about 90 percent of tuition and fees and fees for most UMass Amherst students in 1988, and today covers less than 9 percent.

She said the question she usually gets about the bill is how to pay for it, and pointed to another bill on the committee’s docket for the day — Sen. Adam Gomez’s proposal (S 836) to impose a 2.5 percent excise tax on private higher education institutions with endowments over $1 billion. The revenue collected would be deposited into a new trust fund “used exclusively for the purposes of subsidizing the cost of higher education, early education and child care for lower-income and middle-class residents of the commonwealth.”

A House version of that bill (H 2931), which Higgins filed, is before the Revenue Committee.

“There are 11 private higher ed institutions that have endowments over a billion dollars,” she said. “If we just taxed above a billion dollars at two-and-a-half percent — really just some of that interest that they’re making — we would raise $1.6 billion a year, not only for higher ed but also for early ed.”

Higgins said half of that $1.6 billion could “wipe out tuition and fees across all 29 public colleges and universities in the commonwealth.”

Rob McCarron, the senior vice president and general counsel for the Association of Independent Colleges and Universities in Massachusetts, spoke in opposition to the endowment tax plan.

He said it “would target the very institutions that have stepped up in such a big way to help the state respond to the COVID-19 pandemic,” referencing efforts across higher education to pivot to remote learning, donate personal protective equipment, repurpose dorms to house first responders and create COVID-19 testing programs.

“Endowments and private philanthropy are essential to colleges and universities,” McCarron said. “It is what allows them to maintain excellence in academic programs and research.”

He said a “significant” portion of each endowment is restricted to purposes — like specific research or academic programs — designated by its donors, and that colleges and universities are legally obligated by those donor restrictions. The tax would “erode donor confidence,” make fundraising more difficult, and “weaken the competitiveness” of the state’s higher education sector, McCarron said.