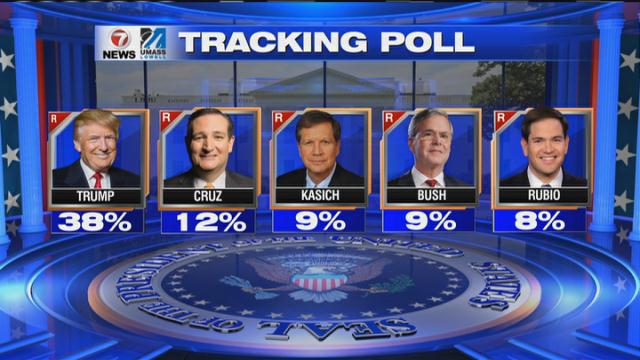 In New Hampshire, it’s the day before "here they come."

And they’ll all be coming from Iowa, where it’s Caucus Day.

Our exclusive 7News-UMass Lowell Tracking Poll shows exactly where the candidates stand in New Hampshire as they get ready for the first Presidential
Primary here a week from tomorrow.

Then, a clump of candidates:  Ohio Governor John Kasich and former Florida Governor Jeb Bush get 9% each; Florida Senator Marco Rubio gets 8%.

One more key number:  Only 8% are undecided.

AP News Guide: It all starts with the Iowa Trudge

And here’s how it looks as we begin our tracking.

Trump well in front, and then a pack of Republicans chasing second and third place.

Remember, whatever impact Iowa will have on New Hampshire can’t be measured yet.

Like the Republicans, the Democrats also have a big front runner, who looks unlikely to be caught.

Here’s the start of our Democratic Tracking Poll, as we begin to measure the daily ups and and downs of the candidates.

Here’s the truth:  We’ve never had a Presidential race quite like this one, so no one is quite sure what’s going to happen.

(Copyright (c) 2016 Sunbeam Television. All Rights Reserved. This material may not be published, broadcast, rewritten, or redistributed.)