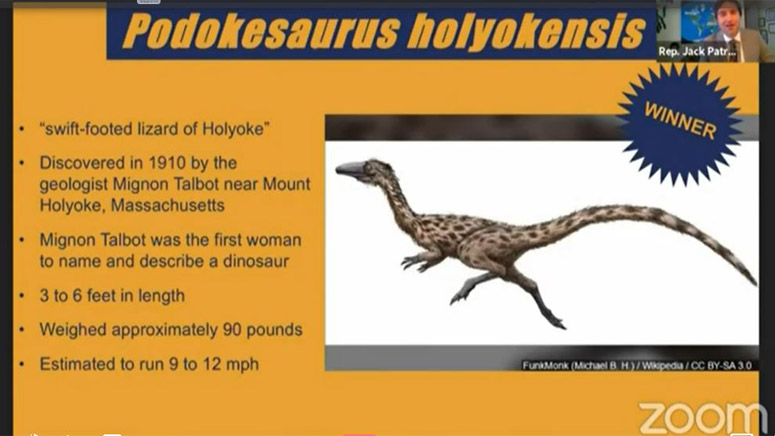 Massachusetts is a step closer to becoming the land of the swift-footed lizard after the House passed legislation (H 3190) on Thursday naming the Podokesaurus holyokensis as the official state dinosaur.

The bill, filed by Rep. Jack Patrick Lewis, has been pitched as a way to engage younger generations in the lawmaking process.

It now heads over to the Senate for a vote on engrossment, after which the legislation would need one more final vote in each chamber before heading to Gov. Charlie Baker for his signature.

“In many ways, the objectives of this legislation, the objectives of what became a much larger project, those objectives have already occurred or are well underway,” Lewis, a Framingham Democrat, told the News Service. “Conversations are happening in classrooms about the legislative process. Kids and parents have reached out to state representatives and state senators that they had certainly never reached out to before and in some cases had never even heard of.”

Lewis started the process to pick an official state dinosaur in January with an online survey asking people to vote between the Podokesaurus and the Anchisaurus polyzelus.

The Podokesaurus, otherwise known as the swift-footed lizard, was about three feet long and lived roughly 180 million to 195 million years ago.

Its bones were initially found in 1910 near Mount Holyoke College by Mignon Talbot, the first woman to name and describe a dinosaur.

After Lewis filed the bill, it was sent to the State Administration and Regulatory Oversight Committee, which unanimously voted to move it forward in September.

For Lewis, the effect of the project to teach kids about the legislative process hit home several days ago when his 9-year-old son started asking about proper forms of punishment and how to welcome people back into communities after the two drove by a prison in Framingham.

“I just had a huge smile on my face because I’ve never seen my 9-year-old connect some of these dots before,” he said. “And at the end of it, he’s like, ‘so if I want to change something I should reach out to who, my state rep?’ And it was like eureka. Unfortunately for you, I am your state rep so you’re stuck talking to me, but I can connect you with Karen Spilka if you’d like.”