If vaccinations pick up while cases drop, US would be ‘closer to being safe’ from another surge, Fauci says 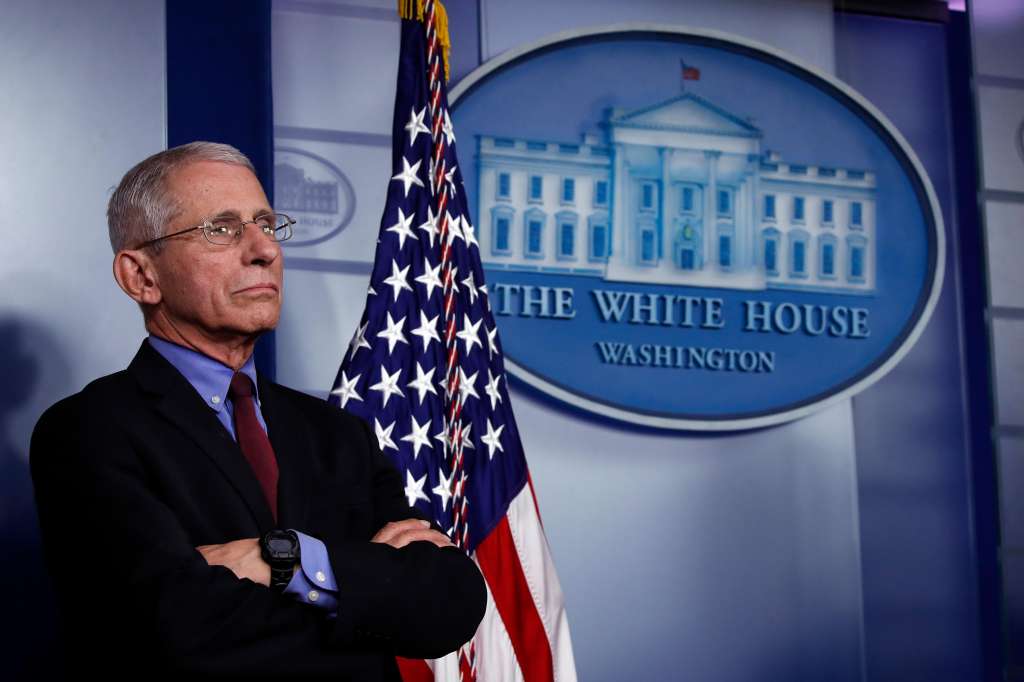 Dr. Anthony Fauci, director of the National Institute of Allergy and Infectious Diseases, listens during a briefing about the coronavirus in the James Brady Press Briefing Room, Friday, March 27, 2020, in Washington. (AP Photo/Alex Brandon)

(CNN) — Nearly one in 10 Americans — more than 32 million people — are now fully vaccinated against Covid-19, according to data from the Centers for Disease Control and Prevention.

That’s not high enough yet to crush the spread of coronavirus through herd immunity, something experts say would take months still.

But if case rates keep dropping while the country gets more vaccines into arms, the nation will get “closer to being safe from another (case) surge,” Dr. Anthony Fauci told CNN Wednesday.

“You can never put your guard down completely. … (But) once you get a substantial proportion of the population vaccinated, that is a very, very strong defense against there being another surge,” Fauci, director of the National Institute of Allergy and Infectious Diseases, told CNN’s “New Day.”

Several leading public health experts still are concerned that more-contagious variants might fuel another case spike in just several weeks’ time, particularly because their share caught in surveillance testing is increasing, and because spring break trips may promote more spread.

Some of those experts have encouraged people to keep masking and distancing until significantly more vaccinations happen, regardless of what states may allow.

“When you start doing things like completely putting aside all public health measures … that’s quite risky,” Fauci said Wednesday when asked about Texas’ moves. “We don’t want to see another surge, and that’s inviting one when you do that.”

The country has averaged more than 55,800 new Covid-19 cases a day over the last week — a 13% decline from the week previous, and well below the nation’s pandemic peak average of more than 255,300 a day on January 10, according to Johns Hopkins University data.

The nation’s test-positivity rate, or the percentage of tests taken that turn out to be positive, averaged about 4.2% over the last week as of Sunday — one of the country’s lowest averages recorded during the pandemic, according to data collected by the Department of Health and Human Services. The World Health Organization previously suggested governments could consider reopening when the positivity rate is 5% or lower for at least two weeks.

But the positivity rate isn’t dropping everywhere. In Houston, Mayor Sylvester Turner said Monday his city’s positivity rate was 13.1%, higher than it was last week. Texas’ seven-day average rate as of Sunday was 7.3% — down from 9.5% a week earlier, according to HHS data.

Some states announce more people now eligible for a shot

States are working to ramp up their vaccination efforts, hoping to get more shots into more arms faster. This week, several state leaders announced they were opening up current eligibility requirements and allowing more residents to get a vaccine.

Alaska took it the furthest by making vaccines available to everyone living or working in the state who is at least 16 years old — becoming the first state in the country to do so.

“With widespread vaccinations available to all Alaskans who live or work here, we will no doubt see our economy grow and our businesses thrive,” Alaska Gov. Mike Dunleavy said in a news release.

Pfizer’s Covid-19 vaccine is the only one available for use by people who are 16 or older, while the Moderna and Johnson & Johnson vaccines are both restricted to people 18 or older.

In Vermont, Gov. Phil Scott announced Tuesday the state will allow anyone 16 or older who has certain high-risk conditions to schedule a vaccine appointment starting Thursday.

Dr. Mark Levine, Vermont’s health commissioner, said that to make vaccine distribution more equitable, the state will allow household members accompanying eligible residents who are Black, indigenous or people of color (BIPOC) to vaccine appointments, to also get a vaccine starting next week.

In Louisiana, Gov. John Bel Edwards also said Tuesday people 16 and older with certain health conditions are now eligible to get a vaccine.

“We came to this decision after hearing from our providers over the weekend that there’s a little slack in the appointments, and that they were able to accommodate and ready to accommodate more people,” Edwards said.

“We also have had a very stable supply (of vaccine), especially of the Moderna and the Pfizer, so we feel comfortable about what’s coming ahead,” he added.

But those guidelines are not final, Fauci said Tuesday in an interview with NPR. “In pretty quick succession, I believe you’re going to be seeing updating of these guidelines,” he said.

Fauci said he’s in constant communication with the CDC and guidance will likely evolve as the agency works to respond to new information as it comes in.

“They have a large group of experienced epidemiologists who are trying to make these decisions based on a combination of real data, which they collect in real time every day, with modeling studies, as well as a good dose of what we refer to as real-time common sense,” he added.

In its new guidance, the CDC noted its travel recommendations have not changed: The agency says people should delay travel and stay home.

The CDC told CNN on Tuesday it may update travel guidance for the fully vaccinated when the science is clearer and more people are vaccinated against Covid-19.

“CDC may update its travel recommendations for fully vaccinated people as more people are vaccinated and we learn more about how vaccines work in the real world. This is something we will be closely watching in the United States,” CDC spokesperson Jason McDonald said in an email to CNN.