‘Into the Wild’ bus on display during preservation work 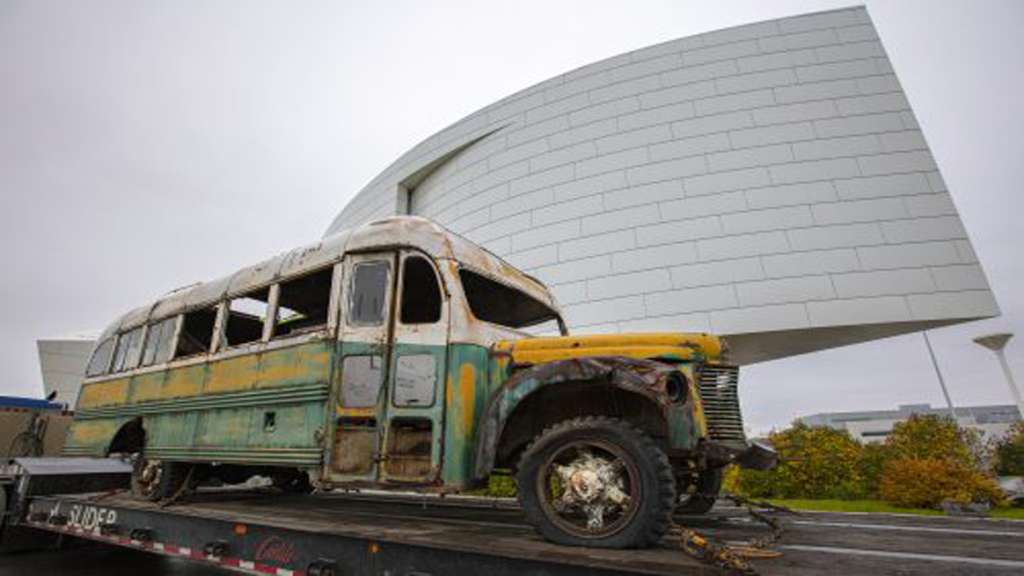 FAIRBANKS, Alaska (AP) — A bus that people sometimes embarked on deadly pilgrimages to Alaska’s backcountry to visit can now safely be viewed at the University of Alaska Fairbanks while it undergoes preservation work.

The bus was moved to the university’s engineering facility last week while it’s being prepared for outdoor display at the Museum of the North, Fairbanks television station KTVF reported.

The abandoned Fairbanks city bus became a shelter for hunters and others using the backcountry near Denali National Park and Preserve, but it became a beacon for those wishing to retrace the steps of Christopher McCandless, who hiked to the bus in 1992.

The 24-year-old Virginia man died from starvation when he couldn’t hike back out because of the swollen Teklanika River. He kept a journal during his last days, which was discovered when his body was found.

McCandless’ ordeal was chronicled in Jon Krakauer’s 1996 book “Into the Wild,” followed later by director Sean Penn’s movie of the same name. People from all over the world made the bus a focal point and tried to retrace his steps.

The state of Alaska removed the bus located about 25 miles (40 kilometers) from the town of Healy after two women — one from Switzerland and the other from Belarus — drowned on homages to the bus. There were 15 other search-and-rescue missions since 2009, the state Department of Natural Resources said in August 2020 when the bus was flown out of the wilderness.

Many people have a personal connection to the bus, said Angela Linn, senior collections manager of ethnology and history at the museum.

“It’s OK that people have this huge range of feeling about the bus,” Linn said. “That means they’re thinking about it. They have opinions about it, and that means they’re engaged with history, which is a really important thing for those of us who are in the business of preserving history.”

The bus is being preserved in a heated, secure space that has environmental controls. It also has an elevated observation space that allows anyone to view the bus for free on weekdays. The bus is expected to remain there through the end of the academic year.

Preparing the bus for outdoor is an extensive process, Linn said.

“One of the very first things we’re going to do is to document, really systematically, all the graffiti that you can see on the inside and the outside of the bus. This is a really important part of the last 30 years of the bus,” she said.

Holes cut in the roof and floor of the bus to allow a helicopter to ferry it out of the woods must be repaired, Linn said, and the bus is riddled with bullet holes.

“Some of them are kind of dangerous. The shots that come from inside leave these jagged holes, so we don’t want anybody to be injured when this does eventually go on exhibit,” she said.

The 1940s-era bus, sometimes called “Bus 142” or “The Magic Bus,” was used to house employees by the Yutan Construction Co. when it built an access road about 25 miles west of the Parks Highway, the main thoroughfare between Anchorage and Fairbanks.

The bus was abandoned in 1961 and had become an emergency shelter for those using the backcountry to recreate or hunt.

Telling the other history of the bus will be part of the permanent display.

“That’s one of the things that we want to explain to people and show people, that there is a lot more to the history of the bus and the story of the bus than just those 114 days that McCandless is associated with it,” Linn said.