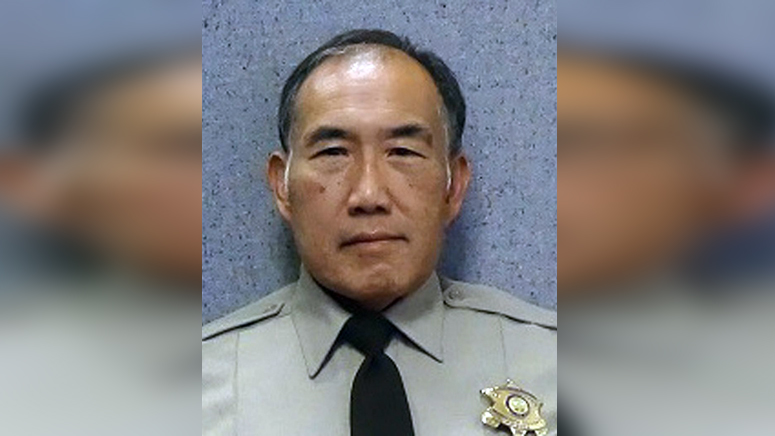 In this undated photo released by the Maricopa County Sheriff's Office is Officer Gene Lee. Authorities say Lee, a Phoenix area jail officer who was comatose after being attacked by an inmate has died. Maricopa County Sheriff Paul Penzone said 59-year-old Daniel Davitt attacked Officer Gene Lee without provocation Tuesday, Oct. 29, 2019. He said Lee was grabbed by the throat from behind and knocked to the ground. Penzone said Lee's head hit the cement floor and he never regained consciousness. Davitt faces sex crime charges involving children and is representing himself. (Maricopa County Sheriff's Office via AP)
Associated Press

PHOENIX (AP) — An inmate’s deadly attack on a Phoenix area jail officer was completely unprovoked, according to court documents made available Thursday.

Maricopa County Jail video shows inmate Daniel Davitt talking with Officer Gene Lee on Tuesday outside a holding space before suddenly grabbing Lee by the throat, charging documents said. Davitt then pushed Lee backward and used his right leg to knock the officer off his feet.

Lee was rushed into surgery to relieve pressure on his brain but succumbed to his injuries.

Penzone called Lee’s death “tragic and egregious” and called Davitt “a criminal predator with no respect for authority, human life or the community.”

“We absolutely need to get away from the mentality that when a bad person attacks a law enforcement professional that’s the cost of doing business,” Penzone said. “It is not. It should never be.”

Davitt, 59, has been transferred to a jail in neighboring Pinal County, authorities said.

He made an initial appearance Tuesday on one count of aggravated assault on a corrections officer. More charges are expected. Flanked by three armed deputies, Davitt said little except his “wish to assert my right to speak with an attorney.”

A judge set bond at $50,000 and assigned a court-appointed public defender. Davitt is awaiting trial on charges of sex crimes involving children and had been representing himself in court on those charges.

“I want to be very clear that violence against law enforcement, first responders, public safety will not be tolerated,” said Maricopa County Attorney Allister Adel.