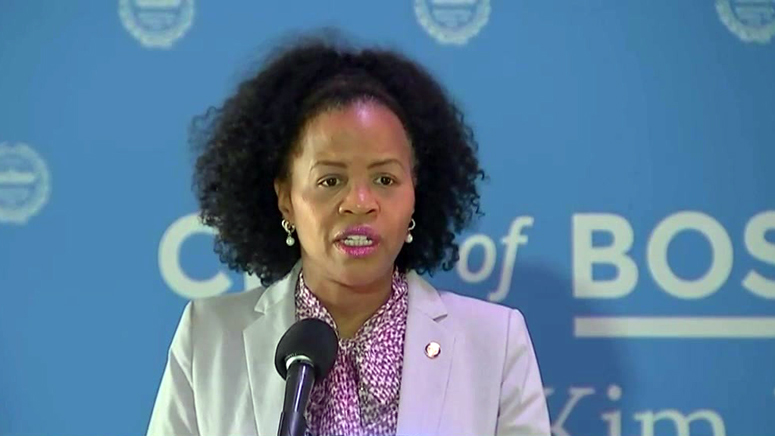 Boston Mayor Kim Janey said Tuesday that her office is reviewing video submitted by Police Commissioner Dennis White’s family claiming he was the victim, not the aggressor, of domestic violence in his former marriage, but Janey suggested she still intended to “move in a new direction” after a hearing this week.

The mayor’s office plans a hearing on Wednesday to consider whether to remove White, who was accused in 1999 of hitting and threatening to shoot his then-wife, who was also a police officer.

White’s attorney over the weekend asked Janey to consider video affidavits submitted by his daughter, Tiffany, and former sister-in-law claiming that it was his ex-wife who was abusive, not White, according to multiple reports.

Janey, in an interview on GBH’s “Boston Public Radio” on Tuesday, said her team was “looking at these videos as we speak” and said they would be considered as she decides whether to fire White.

“I’m not sure why this information was not captured in the investigation where folks had an ample opportunity to make their case there. Part of the concern was the lack of cooperation with the investigator and certainly that was also discovered throughout the police department,” Janey said, referencing the city-commissioned review of the allegations against White.

“We will make a determination based on all of the information. The purpose of this hearing, though, is to move in a new direction,” Janey continued.

The mayor repeatedly mentioned the “blue wall of silence” as something that needed to be broken down in the Boston Police Department. She also referenced the investigation’s finding that White struck a 19-year-old woman in 1993 “over a fight around $10.”

If Janey does fire White, as expected, the mayor suggested that the search for a permanent replacement could take months and may not be concluded before the city elects a new mayor in November.

“I would imagine that this process would take months. Again, we do not want to find ourselves with a rushed process, with a process where individuals have not been fully vetted, so it is important that we take out time with a search committee,” she said.

White was appointed quickly by Walsh following the resignation of William Gross, but worked as commissioner for two days before Walsh suspended him after the Boston Globe inquired about past allegations of domestic violence contained in court records.

Walsh has denied prior knowledge of the allegations, despite Gross and White asserting that Walsh would have been briefed on White’s internal affairs file as part of any promotion process.

“I think everyone at this point acknowledges that the process that got us here in terms of making a quick appointment is not the process we want to continue,” Janey said. “We do need to take the time to have a search. Boston is a world class city, Boston deserves a national search, where the community is front and center in terms of being able to weigh in on what they’d like to see in a police commissioner.”

Janey sidestepped questions by host Jim Braude about whether she thought she had the authority as acting mayor to name a permanent police commissioner, or whether she could guarantee a search would stretch beyond the election.

“I would make sure that our search committee, if this is the route we’re going, lays out a timeline and a process by which we will get there. But what I will say, and be very clear, is that we will not put forth a process that would be rushed and have a candidate or finalists who has not been fully vetted,” Janey said.

Wednesday’s hearing is scheduled for 9 a.m. and is not open, despite White’s attorney requesting that the proceeding be public.