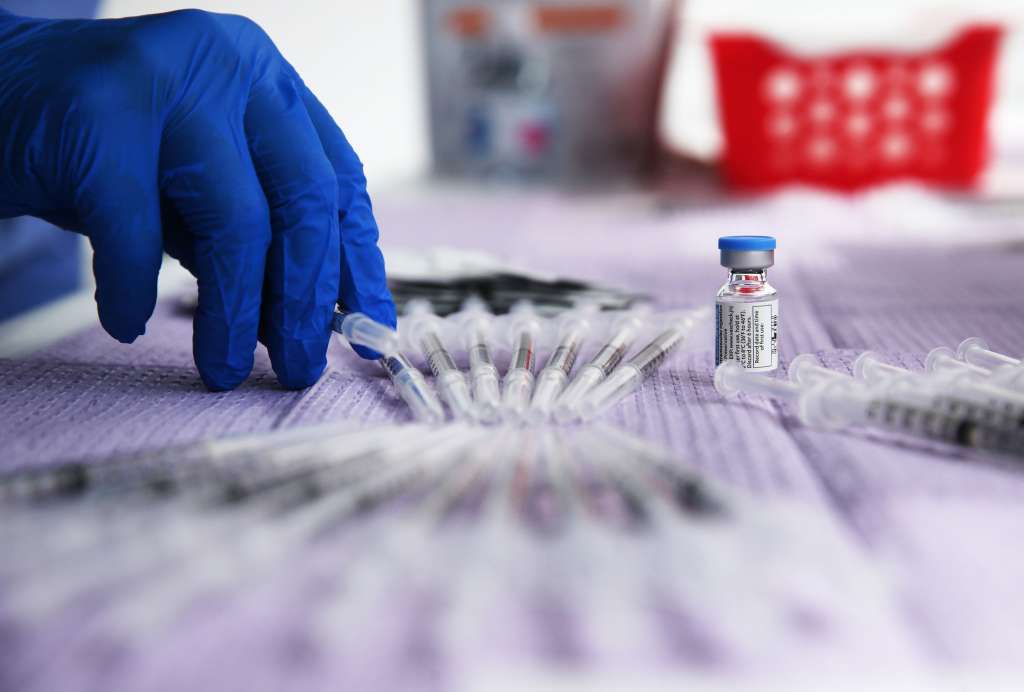 LOS ANGELES, CALIFORNIA - MARCH 25: One-shot doses of the Johnson & Johnson COVID-19 vaccine are prepared at a clinic targeting immigrant community members on March 25, 2021 in Los Angeles, California. The clinic, run by the St. John's Well Child and Family Center, estimates it has vaccinated more than 100,000 people in the Los Angeles area amid reports of two undocumented women who were refused coronavirus vaccinations in Orange County Rite Aid stores. Rite Aid has called the refusals mistakes in a written statement. (Photo by Mario Tama/Getty Images)
Associated Press

WASHINGTON (AP) — U.S. military leaders said Thursday that recent problems with the Johnson & Johnson vaccine have made it more difficult to provide shots for forces overseas, and that vaccines have been offered to service members’ families or other tier two beneficiaries in only 40% of the military sites outside the U.S.

Speaking at a Pentagon press conference, they said they are making up for the Johnson & Johnson shortfall by shipping more Moderna vaccines to forces outside the country. The cold temperature and other requirements for the Pfizer vaccine make it more difficult to send overseas.

Johnson & Johnson had to discard 15 million doses of its coronavirus vaccine last month because the batch did not met quality standards. The loss in expected vaccines was a greater problem for the military, because it had targeted the Johnson & Johnson shot for distribution overseas since it only requires one dose and doesn’t need the strict temperature controls that others do.

Army Lt. Gen. Ronald J. Place, director of the Defense Health Agency, told reporters that based on President Joe Biden’s latest guidance for all adults, the department will begin offering vaccines to all eligible troops, family members and other beneficiaries by April 19.

Some troops and their famlies overseas have expressed frustration at their inability to get a vaccine, particularly since many are in areas, including around Europe, that have been hard hit by the COVID-19 pandemic. Place said that in many locations the vaccines are still being offered only to tier one individuals, which include troops who are deployed, health care or emergency workers, and beneficiaries who are 65 and older.

He added that while just 7% of the eligible Defense Department population is outside the U.S., the Pentagon is shipping 14 percent of the doses it gets to overseas locations.

“That said, if you’re a service member stationed overseas or a family member, likewise stationed overseas, and you haven’t received a vaccine and you don’t know when you’ll be able to, these numbers mean nothing,” said Place. “And it’s understandably frustrating.”

Place said that he expects to be able to deliver at least an initial dose to every eligible Defense Department person overseas who wants one by the middle of May.

Military officials from across the services said that they are seeing an increase in the rate of those agreeing to take the vaccine.

In mid-February, military officials said that thousands of service members were refusing or putting off the COVID-19 vaccine, prompting Defense leaders to beef up efforts to educate troops about the shots, which are strictly voluntary.

Over time, however, Place said that the acceptance rate is growing, althought the Pentagon has not provided numbers and has said it doesn’t collect data on those who opt out of the vaccine.

“We continue to see many individuals who were taking a wait and see approach now coming in for the vaccine,” he said.

National Guard leaders said Thursday that close to 18 percent of their forces – or more thanh 76,000 — have been fully vaccinated, and another 111,000 have gotten at least one shot. Guard troops are also working in many states to help deliver the vaccine, particularly in more remote or underserved locations.

There are more than 2,200 guard members spread across 1,000 different sites, including mobile vaccination centers, who are providing vaccines. As of this week, Guard members had administered 6 million shots to people around the country.