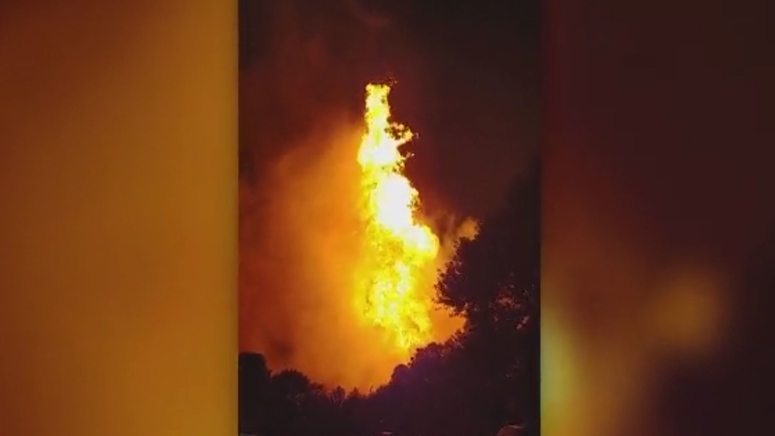 The 30 inch (76 centimeter) wide pipeline moves natural gas under high pressure, so the rupture at about 1 a.m. caused a tremendous amount of damage in the immediate area, authorities said. Firefighters were still working to douse the flames hours later, with trucks repeatedly refilling their tanks and returning to the scene.

County Emergency Management Director Don Gilliam said the flames reached about 300 feet in the air and could be seen throughout Lincoln County.

The explosion was so huge that it showed up on radar, according to a tweet from WKYT-TV meteorologist Chris Bailey.

Emergency managers said the rupture involved the Texas Eastern Transmission pipeline, which is owned and operated by Enbridge. The pipeline stretches more than 9,000 miles, from the Mexican border in Texas to New York City. A statement from the company based in Calgary, Canada, said “Enbridge is aware of and is responding to a rupture on the Texas Eastern system in Lincoln County.”

Some 75 people in the Indian Camp trailer park in the Moreland community were evacuated to the New Hope Baptist Church in Stanford. Authorities said they don’t yet know if others are missing or unaccounted for.

Authorities urged people gathering for the multistate 127 Yard Sale to stay away as crews worked to contain the damage.