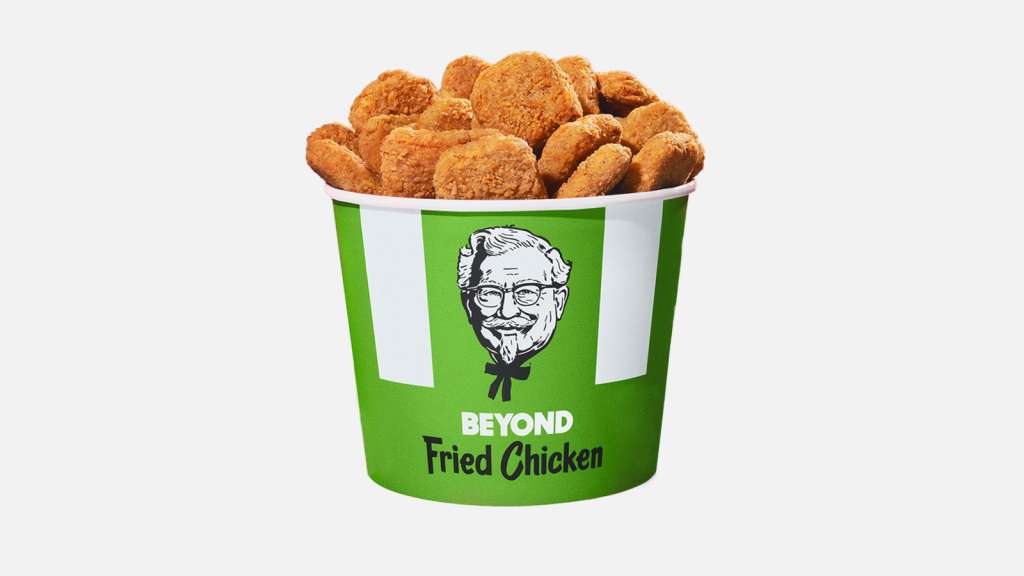 Beyond Fried Chicken goes on sale January 10 across the United States. Credit: CNN

(CNN) — Kentucky Fried Chicken is going to sell a new menu item that contains no chicken — but tastes like it does.

The new plant-based fried chicken nugget alternative, called Beyond Fried Chicken, will be added to menus nationwide beginning Monday, Jan. 10 for a limited time. It marks the first instance of a large national chain selling plant-based chicken products rather than the hamburger or sausage alternatives that have become increasingly common, the chain said.

“It’s time” said KFC US President Kevin Hochman in an interview with CNN Business. He added that the chain’s customers want to “eat less animal protein but don’t want to give up comfort food.”

KFC, which is owned by Yum! Brands, said in a press release that Beyond Fried Chicken is “packed with delicious flavor and the juicy satisfaction that you’d expect from KFC’s iconic fried chicken.” The new product is for customers “that want to eat a little less animal-based protein, but that haven’t become vegan or vegetarian,” Hochman said.

Beyond Fried Chicken can be ordered in a combo meal that includes a medium drink and fries or à la carte in six- or 12-piece portions. Prices vary depending on location, but start at $6.99 for six pieces and cost more for the other options.

KFC and Beyond Meat announced a partnership about a year ago to develop exclusive items for the fried chicken chain. Hochman said it has taken KFC a while to create a plant-based recipe of its iconic chicken, but its collaboration with Beyond Meat has helped the brand create a worthy product.

“The taste is so good that they might choose it over regular fried chicken,” Hochman said.

KFC’s Beyond Fried Chicken had a trial run in 2020 in select US cities including Los Angeles, Charlotte, North Carolina and Nashville, Tennessee. A first iteration, according to KFC, was also sold in Atlanta in August 2019.

There have been a “few tweaks” between the different versions, Hochman said, and the most significant change was that customers wanted dipping sauces and to have it served like a nugget rather than a boneless wing.

Restaurants will receive Beyond Fried Chicken already pre-breaded and fried and in-store employees will re-fry it before serving. However, the new menu item is not for strict vegan or vegetarian eaters because it’s prepared in the same areas where chicken offerings are made.

Fast food chains have jumped on the plant-based meat trend as a way to bring in new customers, attract former customers and build excitement around brands. Companies are also appealing to so-called flexitarian eaters looking to reduce their meat intake for health or environmental reasons.

The chains have been expanding beyond imitation beef, too. Burger King is now testing out nuggets from Impossible, Dunkin’ sells a Beyond Meat breakfast sandwich and Starbucks has its own Impossible breakfast sandwich. This week, Chipotle said that it’s bringing its plant-based chorizo nationwide for a limited time.

But perhaps the most anticipated item is McDonald’s plant-based burger, called the McPlant, which is expected to launch across the US sometime this year.

For Beyond Meat, the expanded exposure could help jolt its flailing stock. Shares have sunk 50% over the past year. Its most recent earnings report from November 2021 missed analysts’ expectations and the company said there’s slowing demand for its products in both grocery stores and restaurants. The stock rose nearly 9% in premarket trading Wednesday following the news.