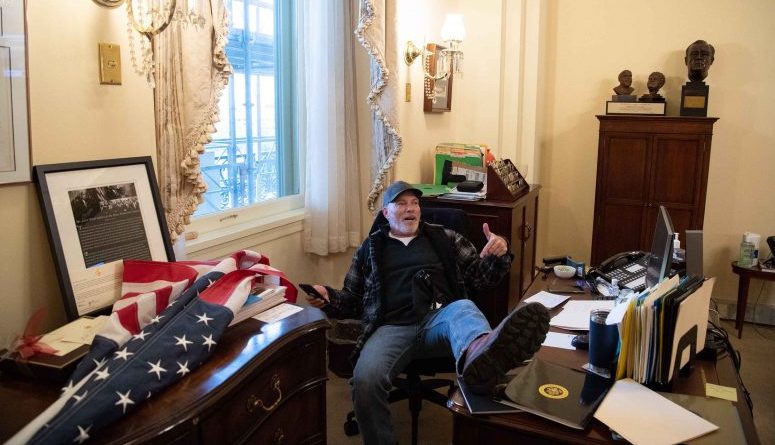 Richard Barnett, the man who put his feet on a desk in House Speaker Nancy Pelosi's office and left her an insulting note during the Capitol riot, will be released from jail to await further court proceedings from home. Credit: Saul Loeb/AFP/Getty Images
CNN

(CNN) — Richard Barnett, the man who put his feet on a desk in House Speaker Nancy Pelosi’s office and left her an insulting note during the Capitol riot, will be released from jail to await further court proceedings from home.

A judge deemed on Tuesday that Barnett was not dangerous enough to stay in jail as he awaits trial. He will be released to home detention in Arkansas and will be under a GPS monitor.

Barnett quickly gained notoriety after the riot for boasting about provocations inside the Capitol, and the chief judge of the DC District Court shortly after the riot harshly responded to his case, saying he needed to stay in jail.

But in recent weeks, a federal appeals court ruling made it harder for the Justice Department to keep defendants who were not accused of assault or planning an attack to stay locked up.

“Consider this a test,” Judge Christopher “Casey” Cooper of the DC District Court told Barnett in a hearing on Tuesday.

Cooper said he weighed Barnett’s potential to be dangerous — including his outlandish behavior and attempts to avoid detection after the riot, brandishing of guns in public, taking a stun gun into the Capitol and his possible adherence to some QAnon conspiracy theories — but did not believe the Justice Department showed enough evidence to merit keeping the man in jail.

A Justice Department prosecutor also disclosed at the hearing that she had begun plea discussions with Barnett’s lawyers. On Wednesday, Barnett’s attorney, Joseph D. McBride, told CNN’s Brianna Keilar that formal discussions about a guilty plea have not taken place and that Barnett has “zero interest” in a preliminary offer that has been brought forth.

“As of now, we are awaiting further discovery from the government, and we are looking to proceed to trial. Should an acceptable offer materialize between now and then, then we will give it due and proper consideration,” McBride said on “New Day.”

Regarding his client’s actions during the January 6 insurrection on the Capitol, McBride said, “My client understands that his statements and that the — accepting the allegation as true, the note that, for the sake of argument, of course, the note that he’s alleged to have left was all made in bad taste.”

“Mr. Barnett is a funny man. He’s a jokester, he doesn’t have a real clear sense of boundaries. If he could take it back, he likely would. But we can’t unring the bell at this point,” McBride said when asked if Barnett was a fan of Pelosi or if he would describe her in disparaging terms.

Barnett had pleaded not guilty to seven criminal counts. Prosecutors said Barnett could face nearly six years or more in prison if convicted.