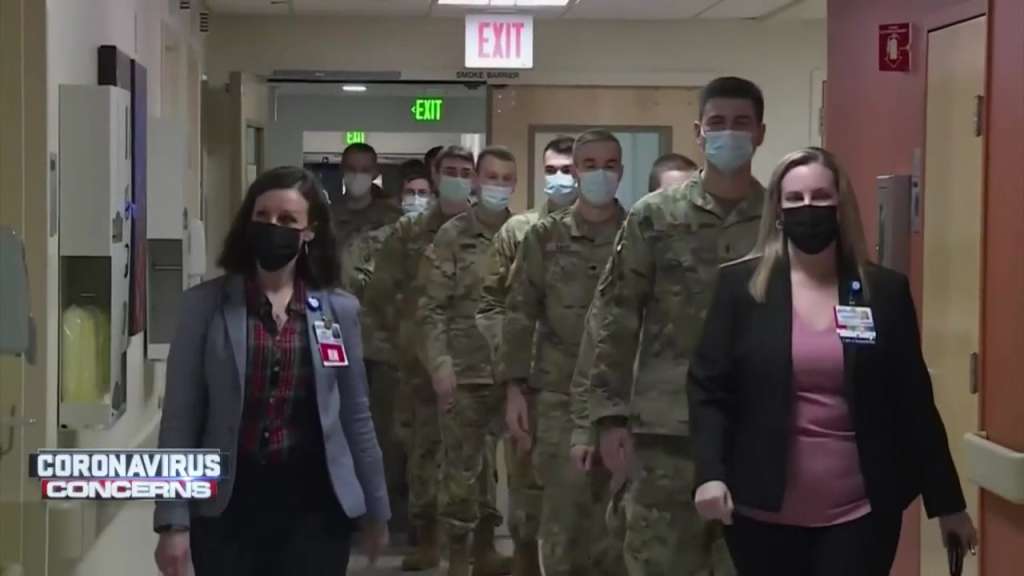 While officials have started to call out very early signs that the Omicron coronavirus wave is peaking — or at least plateauing — in parts of the Northeast, experts say it will be weeks before any change can be declared a trend. Until then, the surge has put frontline workers in the medical industry and others at higher risk.

More than 155,900 people in the US are hospitalized with Covid-19, according to data Thursday from the US Department of Health and Human Services, surpassing records set in last winter’s surge. And hospitals need more people to help provide care.

Meantime, deaths nationally have lagged from the worst of last winter’s surge, as the country has averaged 1,817 Covid-19 deaths a day over the past week, Johns Hopkins University data shows. The peak daily average was 3,402 one year ago on January 13, 2021.

In Washington state, hospitals will temporarily halt nonurgent procedures “so as much capacity and staff can be dedicated to emergent needs — the people who need this right now,” Gov. Jay Inslee said Thursday.

“We’re estimating the first round of staffing and relief rollout will allow skilled nursing facilities to open up 200 or more beds by the end of February,” Evers said Thursday as the state announced a record number of confirmed cases.

“Our health care providers are beyond exhausted. We simply do not have enough staff to care for all those who are ill,” said Lisa Greenwood, the associate dean of nursing at Madison College, which is training the Guard members.

Schools are also feeling the squeeze

Since the emergence six weeks ago in the US of Omicron — which complicated an ongoing surge from the Delta variant — states have been leaning on military and federal emergency teams to backstop staff absences.

Before New Year’s, states such as Delaware, Hawaii, Maine, Massachusetts, New Hampshire and New York called upon Guard members to assist with medical and nonmedical tasks.

In Ohio, more than 2,000 Guard members have been deployed as cases keep rising. Now, with hospitalizations at an all-time high, officials are urging residents to protect themselves from infection.

“In this Omicron surge, you need to remember no one is untouchable,” state health department director Dr. Bruce Vanderhoff said Thursday, asking people to only go to the hospital in the case of a real emergency as staffing shortages remain critical.

Assistance needed with staffing is not limited to health care facilities. Many school districts have weighed with difficult decisions about the return to in-person learning after the holidays, and the surge has impacted educational staffing.

Major schools districts from New Mexico to Pennsylvania have halted in-person learning because of high Covid-19 case rates and teacher absences. Even New York City officials are consider a temporary remote learning option, less than a week after saying virtual lessons had not been effective earlier in the pandemic.

Montgomery County Public Schools, the largest school district in Maryland, submitted a formal inquiry for help from the National Guard to address its school bus driver shortage, district spokesperson Chris Cram told CNN on Thursday. Earlier this week, nearly 100 of the district’s school bus routes were impacted by the shortage of drivers, but that number is now down to 29 routes as of Thursday, Cram said.

Testing problems are still in play

While health experts are hopeful the surge may soon wane, the sheer volume of infections continues nationwide. Confirmed positive cases of Covid-19 have climbed to a daily average of 771,580 in the US, according to Johns Hopkins University data, more than three times that of last winter’s peak average.

Mitigating Covid-19 transmission remains paramount, and officials are working to overcome a shortage of Covid-19 rapid tests so that those who are asymptomatic can know to quarantine.

In Nevada, state officials have ordered more than a half-million at-home antigen test kits that will be made available at no cost and will be distributed near the end of the month through “community partners” to be named later, Gov. Steve Sisolak announced Thursday.

“This will ensure that, as we live with Covid, the supply chain does not dictate access for Nevadans,” Sisolak said.

However, not all confirmed cases via rapid test are tracked and recorded, meaning the numbers of those with Covid-19 may be much higher.

The Omicron variant has become so widespread in Oregon, it is outpacing health leaders’ ability to keep track of how many people are infected, they said.

“We know our daily case counts are missing many at-home test results, and in the face of the highly transmissible Omicron variant, case data is also missing many undiagnosed cases, as well,” Oregon Health Authority Director Patrick Allen said in a briefing Thursday.

“To be completely transparent, we are likely approaching the maximum capacity our testing system has to identify cases.”

Instead of interviewing people for contact tracing, health teams will turn their focusing to tracking outbreaks in high-risk settings, asking those with positive test results to report them to the state voluntarily through a website and hotline, Allen said.

“Hospitalizations and deaths will continue to represent our most reliable and significant metric,” Allen said.