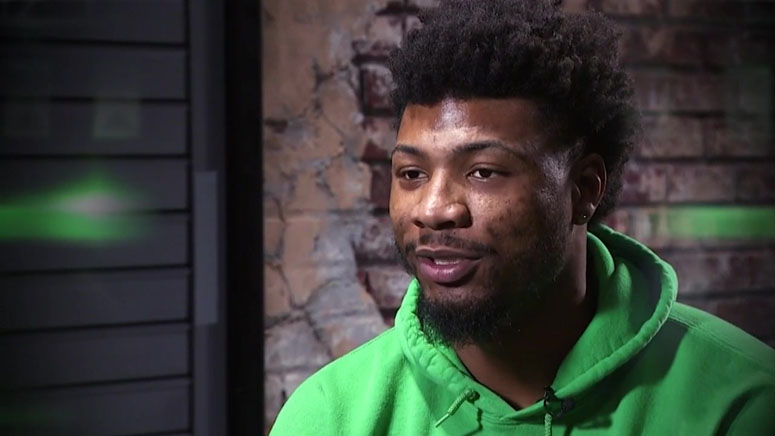 A six-year veteran of the C’s, Marcus Smart finds himself the seasoned leader of a very young team. He does whatever it takes to win, and his teammates love and respect him for it.

“I’ve been here the longest,” says Smart, in a recent sit down interview at the Celtics practice facility with 7News’s Madeline Hunt. “So [my teammates] are like, ‘He knows what he’s talking about. Let’s listen to him.’”

Off the court, he’s working to help a different team: kids who are fighting chronic illnesses.

“My whole life, somebody’s been there to help me, when I finally needed the help,” Smart says. “For me, I was blessed enough to have somebody in my corner. It’s time for me to do the same.”

Smart’s YounGameChanger Foundation provides resources and support to the kids and their families.

Smart knows how hard it can be to smile sometimes. When Marcus was just nine years old, he lost a brother to cancer. Last year, his mother Camellia lost her battle with the disease as well.

“Cancer is something that hits home for me,” Smart says. “So for me it was really, how can I help people in my situation or families who are going through or went through what I’ve gone through.”

To raise money to do that, Smart is hosting a bowling bash at Kings in Boston on Tuesday, Nov. 12. He says it’s a fun way for fans to meet some of their favorite players and for Marcus to bowl over his teammates with his talent.

“Oh yeah,” says Smart, with a laugh, when asked if he’s the best bowler on the team. “Those guys don’t even compare.”

Although known as a fierce competitor on the court, when he isn’t wearing his game face, Smart is usually laughing and pulling pranks, cracking up when remembering a recent one he pulled on Celtics rookie Romeo Langford.

Last month, Smart teamed up with Chipotle to trick the 20 year-old into thinking he had to pay a pretty heft burrito bill.

“I was the manager and I called in a fake order for his rookie duties,” Smart says with a smirk. The restaurant’s employees told Langford he owed $4,500 on an order that was called in by one of his teammates.

“You said Marcus Smart?” asks a confused Langford, in an exchange caught on camera. “Marcus Smart called,” says an employee. “That’s something he would do,” Langford replies. Finally Smart walks out from a backroom and surprises his shocked teammate.

The tricks seem to be working. This season’s Celtics are playing like a team that is really clicking.

“On the court, everyone knows their roles,” Smart says of the team, which is off to a 6-1 start through Thursday night. “Everyone’s accepted it. No one’s out there trying to figure out what they can and can’t do within the team.”

Marcus Smart is known for never giving up and leaving it all on the court every night. But he knows life is about more than wins and losses.

“I think that’s what my purpose on this Earth was,” he says. “Not to play basketball, but to help others.”