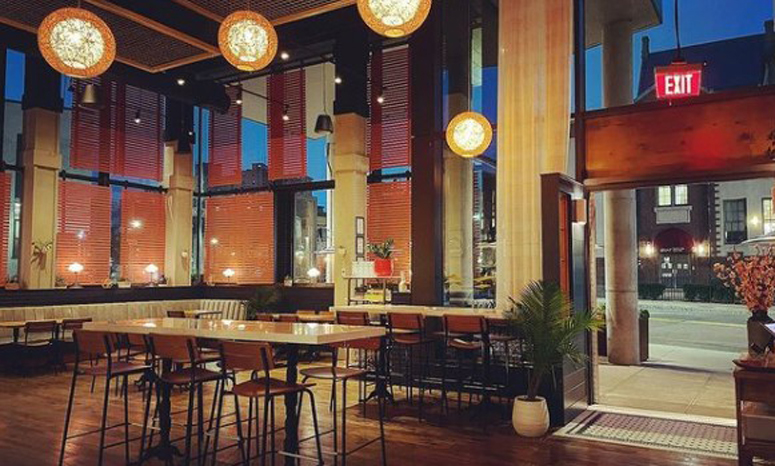 Restaurant owners have concerns about the restrictive nature of the state’s reopening protocols and are frustrated that their employees, especially those who interact with unmasked diners, are not being prioritized for vaccination. But they are also looking ahead to business and workforce issues that present challenges to the restaurant industry’s post-COVID revival.

Even before the pandemic, restaurant owners said soaring rents in the Boston area, the state’s rising minimum wage and the establishment of paid sick time and paid medical leave policies — some of which was implemented as part of the 2018 “Grand Bargain” law — made it increasingly hard to operate a profitable restaurant. COVID-19 only added to those pressures, owners and industry officials said Tuesday during a meeting of the Restaurant Promotion Commission.

Christopher Jamison, co-founder and CEO of the restaurant management group COJE, said he could support the idea of a moratorium on any legislation that affects wages or that would negatively impact the restaurant industry.

“There’s a breaking point here if these things just continue to incrementally increase,” he said. Jamison added, “It’s been so tough the last three years, even before the pandemic, trying to assimilate all of the various wage and benefit programs that are new to us now. I can’t even really imagine if we had to continue doing that for the next two years.”

Sen. Julian Cyr, who serves on the commission and whose parents were in the Cape Cod restaurant industry for nearly three decades, said he would be “shocked” if the Legislature were to consider freezing the minimum wage, which stands at $13.50 per hour now and is set to increase to $14.25/hr next year and to $15/hr on Jan. 1, 2023.

He suggested that the commission instead focus on more “granular policy areas” that members raised during the meeting.

“I think it’s much less likely that the Legislature would pause the minimum wage. I don’t think we’re going to revisit the Grand Bargain for a while, really until we get to that $15 an hour. So the pooling of the tipped wage, looking at credit card fees, some of these other policy initiatives feel to me like a lot more tangible and doable,” he said. “So I want to push on those things because I think that there’s actually a prospect of getting something done, versus something that’s more sort of aspirational.”

Cyr, a member of Senate President Karen Spilka’s leadership team, suggested that there will be an appetite in the Legislature for some of the changes restaurants could seek this session.

“I think we have a bit of a moment where the Legislature is sort of sympathetic to the concerns of restaurants in a way they sort of historically weren’t,” he said. “And so how do we capitalize on it to get some of these tangible things?”

The Truro Democrat expressed a particular interest in the issue of tip pooling restrictions that prevent cooks and others in the kitchen from sharing in tips received with delivery or take-out orders, and increased credit card fees that are sapping more money from restaurants already operating with limited revenue.

“Our model has changed significantly during COVID and I think it will continue to evolve this way where it’s a lot more takeout, a lot more delivery. So the current laws that restrict the tip pooling are very, very detrimental to the very people that are really doing a lot of the yeoman’s work here,” Kathi Maino Turner, whose family runs Turner’s Seafood, said. “Carrying a bag to a car is not the yeoman’s work of getting delivery and takeout and so we really need to be able to come up with some sort of formula that allows the customer’s generosity — which they think of as a tip — to be shared with those people that are so instrumental in keeping the restaurants alive and getting that work done. And right now, it’s against the law for us to give a penny of that to anyone that is not actually in the front, basically carrying the bags.”

Turner and others also raised the issue of credit card fees, which Cyr agreed “really should be looked at.”

Before the pandemic, Turner said 99.9 percent of all credit cards used in restaurants were either swiped in the restaurant or processed using an EMV smart chip in the card. Those transactions generally carried a 2 percent fee.

“When COVID hit, any time anyone used a credit card which was not EMV read or swiped in-store, their fee went from 2 percent to 3.5 [percent]. That’s almost a doubling and that goes on tax and tip and everything,” she said. Turner added, “Not only do the credit card companies get at least one to two percent more, the amount of credit cards used in restaurants went up significantly and every single chargeback had to be covered by the restaurant itself. So basically all they did was make more money on this pandemic because people were putting in their own credit card numbers.”

For Turner’s Seafood, the change in credit card fees means $40,000 in additional costs over four months, she said.

Luz said Massachusetts is one of six or seven states in the country that does not allow credit card fees to be passed onto consumers. He said Sen. Joe Boncore worked with the Massachusetts Restaurant Association on a bill he filed (SD 1578) that would allow businesses to pass those fees along to their customers.

Jamison said the Legislature should also look into the tax status of “kitchen appreciation charges” that his restaurants and others collect from diners and pass 100 percent of it along to the kitchen staff who aren’t allowed to share tips with servers.

“We’re currently going through a very expensive audit because the Department of Revenue has basically said that should be taxable and they want to tax that as income, even though we’re passing it on and it’s a straight pass-through,” he said. “You’re talking about hundreds and hundreds of restaurants in the commonwealth right now that are employing this practice. And if DOR went and audited all of them, that would be a complete nightmare. So, it would take legislation, I think, to identify that a fee, a kitchen appreciation fee, or something to that effect that’s collected and then passed through 100 percent to payroll should be exempt.”

The Restaurant Promotion Commission is working towards the submission of its report with recommendations and best practices for the promotion and continued vitality of restaurants in Massachusetts. The group plans to meet again on March 30 and is expected to file its report soon thereafter.