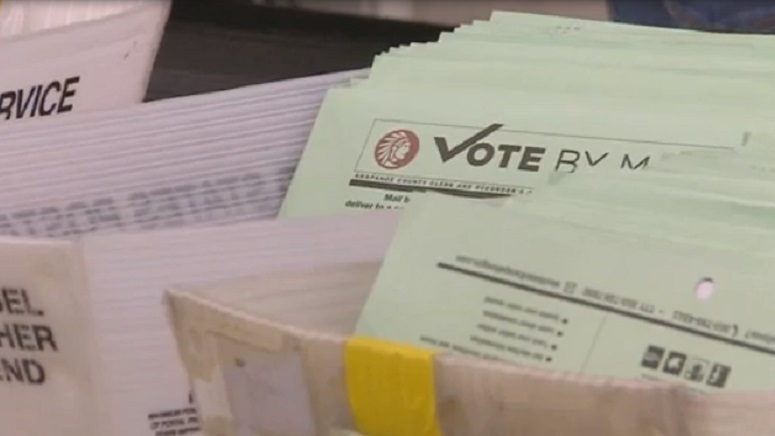 The Senate on Wednesday went on record supporting the permanent adoption of COVID-era voting allowances like expanded early voting and voting-by-mail, and also adopted policies like same-day registration that go beyond the changes made to accommodate elections during a pandemic.

The bill passed 36-3 along party lines after Democrats rejected an alternative the Republican senators offered to address many of the same issues. Democrats pitched the bill (S 2545), which would also build into the system additional supports for people with disabilities, as a way to remove obstacles to the ballot box and to maintain options that proved popular when available to voters in 2020.

“In 2020, for the first time in Massachusetts history, residents had the choice to vote by mail, to vote during [an] extended early voting window, or to vote in person on Election Day. These reforms, which received overwhelming bipartisan support, helped increase civic engagement and enabled residents to vote safely, securely and easily,” Sen. Barry Finegold, who chairs the Committee on Election Laws for the Senate, said.

“In the face of an ongoing pandemic, Massachusetts did not simply protect voting rights. We reinvigorated our democracy,” he said.

Echoing what Senate President Karen Spilka last week referred to as “an anti-democratic, fundamentally un-American darkness” that she said “is spreading across the United States,” a number of Senate Democrats on Wednesday referenced debates around voting rights in more conservative states.

“We’re living in a dangerous moment. Dozens of states are restricting access to the ballot box and citing baseless politically-motivated claims of election fraud as a justification for doing so,” Sen. Cynthia Creem said.

Just as Democrats in states like Texas were unable to stop legislative efforts to change state laws around voting and elections, the Republican minority in the Massachusetts Senate was unsuccessful Wednesday in generating support for a proposed rewrite of the voting reforms bill.

The alternative from the chamber’s three Republicans, which failed on a 3-35 party-line vote, would have required annual notification of each voter’s own registration status from the secretary of state, moved the voter registration deadline from 20 days before an election to five days before, and provided for at least one weekday evening of early voting beyond what the underlying bill proposed. It also would have allowed any registered voter to request a ballot to vote early by mail for any election but would have required the request to be made under the penalties of perjury.

Minority Leader Bruce Tarr called it “a prescription for how to go further and make sure that we have two things. Number one, increased voter participation. And number two, increased security and integrity around elections.” He said he thought it was “important that everyone understand what we are proposing and the many areas of commonality that we share.”

“I would hope that we would adopt this particular substitution and begin the process of a bipartisan agreement to be able to move forward to be proactive, to not be content with creating a situation where we receive voter participation, but one in which we go out and proactively create voter participation,” Tarr said.

The bill put forward by Senate leadership already included reforms that would direct sheriffs and other corrections officials to help eligible incarcerated voters learn their rights and apply for and cast ballots by mail, but senators went beyond that with the adoption Wednesday of a Sen. Adam Hinds amendment that more explicitly spells out what steps correction facilities must take to educate and facilitate voting among the eligible incarcerated population.

A few hours before the Senate gaveled in to debate its election reform bill, advocates pitched the Joint Committee on Election Laws on legislation (H 836/S 474) that mirrors the Hinds amendment.

“People who are incarcerated on misdemeanor convictions, who are civilly committed and who are incarcerated pretrial are all eligible to vote in the commonwealth. But we’ve created a system of de facto disenfranchisement of this population, disproportionately impacting Black and brown communities and undermining their voting power,” Jesse White, policy counsel at Prisoners’ Legal Services of Massachusetts, told the committee Wednesday morning.

People serving sentences for felony convictions in Massachusetts are ineligible to vote in state and Congressional elections while incarcerated, the result of a constitutional amendment approved by 64 percent of statewide voters on the 2000 ballot. But between 7,000 and 9,000 other people each year are held on misdemeanor convictions or as they await trial and remain eligible to vote, Creem said.

“We all feel a sense of pride and connection in our community when we vote … Enabling eligible incarcerated individuals to feel that connection should be viewed as an important component of successful rehabilitation and reintegration and, due to the disproportionate percentage of minorities in our prisons, it should be viewed as an issue of racial justice,” Creem said as the Senate began its debate Wednesday afternoon.

Middlesex County Sheriff Peter Koutoujian said Tuesday that making sure “any incarcerated individual who is eligible to vote has the ability to do so” is a top priority for him and his office, which has “fully incorporated voter registration into our reentry programming.”

In 2016 and 2018, Koutoujian partnered with the League of Women Voters to conduct voter education drives, register new voters and help eligible voters get absentee ballots. In 2020, the sheriff’s office worked directly with eligible voters since LWV volunteers were limited by pandemic health and safety restrictions.

“Our staff works diligently to ensure that returning citizens understand their voting rights and the value of civic engagement to a full and successful reentry into society. Since November 2019, we have helped 192 individuals register to vote as part of the reentry process,” Koutoujian said. “Many of those who registered did not know they would be eligible to vote upon their release and several were registering for the first time in their lives.”

Sen. Sonia Chang-Diaz offered two amendments — both of which were rejected on voice votes — related to the registration of incarcerated voters. One (#8) would have directed jails, prisons and facilities run by the Department of Youth Services to enter into agreements with the state to become automatic voter registration sites. A second amendment (#9) would have made pre-registration to vote part of the re-entry process for anyone preparing to be released at the end of their sentence for a felony conviction.

Geoff Foster, executive director of the Common Cause Massachusetts voting rights advocacy group, said he’s noticed “a strong focus to prioritize voting rights and election reforms in Massachusetts” during this legislative session and told lawmakers that Hinds’ jail-based voting proposal is critical “because it highlights and centers equity in the debate about our democracy.”

Referring to the VOTES Act that the Senate would dive into later Wednesday, Foster added, “We also hope and ask that if that bill moves to the House, that this particular provision of jail-based voting be a top priority for all of you.”

At the outset of debate, Tarr questioned the Legislature’s ability to enact a permanent mail-in voting option without changing the state Constitution — and raised the specter of consulting the state’s highest court on the matter.

Tarr recounted that when Finegold and then-Senate President Therese Murray had sought to permanently expand early and absentee voting in 2013, they had done so by proposing an amendment to the Constitution. He also referenced a constitutional amendment filed this spring by Reps. Michael Moran and Kevin Honan to allow for no-excuse absentee voting.

Finegold responded: “We will say that we in the Legislature do find that mail-in voting is important for the people of the commonwealth. And we do believe the Constitution allows it.”

Tarr replied that he hoped the Legislature would “not play dice with the Constitution, and that we will do what it takes to make sure that we are either compliant, or effect changes that would allow the statutes that we enact to be compliant.”

“I become a little bit nervous when I hear that the Legislature has deemed something constitutional, when in fact there exists a significant constitutional question,” said Tarr, adding that perhaps he and Finegold could join together in the future to seek an advisory opinion from the Supreme Judicial Court.

The bill now heads to the House of Representatives, which has already considered some parts of the Senate bill in other forms. But House Speaker Ronald Mariano said this week that representatives will “need another vote” on election reforms this session.

“Obviously, we’ll wait and see what comes over in the form of the bill that we’ll get from the Senate,” Mariano said earlier this week. “We have taken a vote on the same-day amendment. We’ll see what happens when we begin the debate.”

The House rejected a same-day voter registration proposal last year and this June approved a supplemental budget amendment that would have permanently authorized mail-in voting and early voting before biennial elections.

Baker has supported mail-in voting, and signed the laws implementing and extending pandemic-era voting options, but he is opposed to same-day voter registration.

“We have lots and lots of opportunities for people to register right up until Election Day and a lot of processes that are pretty easy to use to get there,” Baker said in a radio interview last month. “But I want municipalities and the commonwealth on Election Day to focus on one thing and one thing only, which is counting the votes.”