BOSTON (WHDH) - BOSTON (WHDH) – The Massachusetts Bay Transportation Authority wants commuters to know that schedule changes will impact riders on the Red Line for the rest of the week as crews race to repair signal bungalows that were badly damaged Tuesday morning when a train derailed near the JFK/UMass station.

The third car of a Red Line train went off the tracks at an above-ground stop near the Boston campus of the University of Massachusetts and the John F. Kennedy presidential library around 6 a.m. Tuesday.

About 60 passengers were evacuated from the derailed car, authorities said.

One person was treated at the scene for a hand injury and a second person, who initially left the scene, returned later complaining of neck problems and asked to be taken to a hospital, according to MBTA General Manager Steve Poftak.

During the derailment, the train struck and damaged multiple signal bungalows, which house vital hardware and equipment that controls the intricate system of the track, signals, and switches where the Ashmont and Braintree branches diverge on the Red Line. 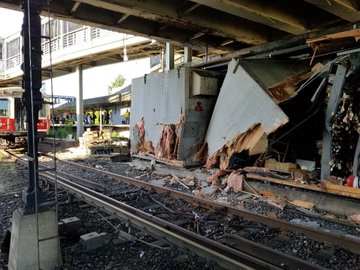 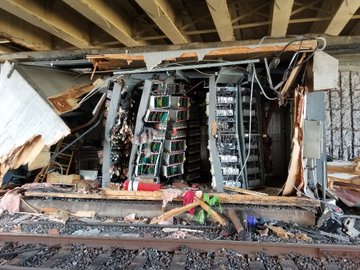 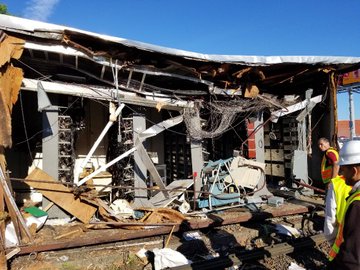 The 39-year-old operator has since been taken out of service pending the outcome of the investigation.

MBTA crews used chainsaws and a crane to upright and move the derailed train overnight. Workers remained on the scene throughout the morning, fixing the tracks and damaged bungalows.

Until repairs on the bungalows are completed, each Red Line train must be given permission to proceed from one station to the next with personnel along the tracks physically directing train routes. The MBTA says the manual process is necessary to allow trains to safely move along tracks.

Trains will continue to operate at reduced speeds and proceed slowly in affected areas until further notice.

To facilitate the ongoing repair work, the MBTA suspended Red Line service from 11 a.m. to about 1:30 p.m. on Wednesday. Crews started to fix the third rail, switches, signals, track, power feeds, and cables.

The MBTA issued the following Commuter Rail update for Wednesday night and Thursday:

The Red Line derailment came days after a crowded Green Line trolley derailed below ground near Kenmore Square, sending 10 people to hospitals and requiring police and firefighters to guide passengers to safety through a darkened tunnel.

Poftak stressed there was no connection between Tuesday’s derailment and the one on Saturday. The earlier incident has been preliminarily blamed on that train’s operator, who has since been suspended.

But Poftak said he wanted a “fresh set of eyes” to examine the incidents.

“I think we have an obligation to the riding public and taxpayers to make sure we are taking every step possible to address these issues,” he said, in announcing plans for the third-party review.

There have reportedly been four derailments so far this year.

The recent derailments added to frustration felt by riders and local officials over the aging transit system — better known as the “T” — plagued by frequent mechanical breakdowns and delays, even as users braced for an average 6 percent fare hike that takes effect July 1.

(Copyright (c) 2019 Sunbeam Television. All Rights Reserved. This material may not be published, broadcast, rewritten, or redistributed.)