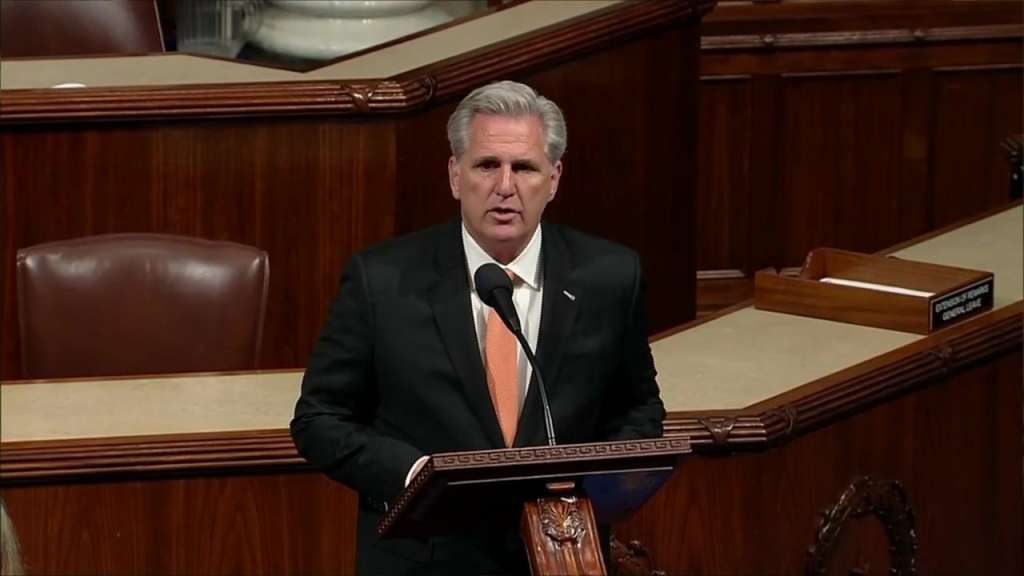 WASHINGTON (AP) — House GOP Leader Kevin McCarthy assured colleagues Wednesday he never asked then-President Donald Trump to resign over the Jan. 6, 2021, insurrection at the Capitol, defending private conversations that have spilled into the open and jeopardized his leadership.

It was McCarthy’s first face-to-face meeting with House Republicans amid the fallout from his criticisms of Trump as well as the party’s most far-right members, but it’s probably not the last time he’ll have to shore up his own standing as leader. In line to become House speaker if Republicans win control in the fall midterm election, McCarthy has treacherous months ahead.

For now, he received a standing ovation.

One Republican in the room said the meeting was “cathartic” for lawmakers. Another voiced confidence that McCarthy would be the “next speaker.”

“He’s got the support of the conference and then some,” Rep. Dan Meuser, R-Pa., said as he left the private session at GOP headquarters across the street from the Capitol.

Yet amid the show of support, McCarthy was challenged by two of the party’s most hard-right lawmakers — Matt Gaetz of Florida and Marjorie Taylor Greene of Georgia — who said they felt particularly singled out by the leadership team over their fiery comments around Jan. 6. Trump ally Rep. Scott Perry, R-Pa., who helped organize challenges to the 2020 election results, also voiced concerns, another Republican said.

The detractors are a political force among the Republicans, but they also appeared to be in a dwindling minority as rank-and-file lawmakers rallied around McCarthy, the man who recruited many of them to Congress and is now raising untold millions to win back the House.

A California Republican long eyeing the speaker’s gavel, McCarthy is at a critical juncture as he works to ascend to the top leadership position. It will be his second try after a failed 2015 bid — but one now fully dependent on his volatile relationship with Trump, who still holds great influence over the party and can make and break careers.

New audio recordings released in recent days by The New York Times portray McCarthy as fed up with Trump in the aftermath of the Capitol attack, when the defeated president rallied his supporters to head to Congress and object to Democrat Joe Biden’s election victory.

In the recordings, McCarthy is heard telling Republicans privately that he was considering asking Trump to resign. In another recording released late Tuesday, McCarthy warns that dangerous public commentary from Gaetz and others is “putting people in jeopardy” of potential violence.

McCarthy has denied The New York Times account of events, leading Democrats and others to call him a liar, as audio of the secretly recorded calls was released. The House committee investigating Jan. 6 is seeking an interview with him.

On Wednesday, McCarthy stood at party headquarters and defended his actions, suggesting he was merely running through possible scenarios as Democrats moved to impeach Trump in the aftermath of the violent siege.

In the GOP meeting, McCarthy clearly stated that he never asked the president to resign, the Republicans said. He has also publicly said he did not do so. The Times did not report that he asked Trump to resign, only that he told Rep. Liz Cheney, R-Wyo., and other members he would.

As president, Trump had affectionately referred to McCarthy as “My Kevin,” one of his earliest endorsers, but their relationship has frayed over time. McCarthy momentarily turned on Trump as his supporters stormed the Capitol on Jan. 6 to disrupt certification of Biden’s 2020 presidential win.

In the days after the riot, it seemed Republicans in Washington might part ways with Trump. Senate Republican Leader Mitch McConnell gave blistering speeches against Trump, and McCarthy’s public and private conversations at that time show flashes of anger and the depth of angst over the shocking, devastating riot by Trump supporters.

But once Biden took office McCarthy quickly went to Trump’s Mar-a-Lago club in Florida to patch things up with the defeated president.

Trump and McCarthy spoke last week, and the former president told the leader he was “not mad” about the disclosures.

To become speaker if Republicans win back the House, McCarthy would need to win at least 218 votes.

“He’s got my support. He’s got everybody else’s support, too,” he said.

Still, Gaetz and other detractors remain a force McCarthy must contend with, much like the lawmakers six years ago who denied him backing to become speaker. He abruptly dropped out of the race.

Gaetz tweeted late Tuesday that the private comments from McCarthy and Rep. Steve Scalise, the No. 2 Republican leader, to Cheney and others are “the behavior of weak men, not leaders.” He brushed off interviews Tuesday night and Wednesday morning.

Among past rivals for the speaker’s gavels, Scalise of Louisiana is no longer outwardly chasing McCarthy for the job, and has in fact become wrapped in the Jan. 6 fallout.

Scalise also faced questions Wednesday in the private meeting after the Times had reported that he joined McCarthy in raising concerns about Gaetz’s public comments at the time, Republicans said.

Scalise said the call had been a private conversation, and no one had been accused of anything.

In a statement, Scalise said “it’s pathetic” that this is what the media chooses to cover. He said with inflation, crime and other issues, it’s obvious that Democrats and the media “continue to double down on their obsession with January 6th” to distract public attention from “the absolutely dismal state of the country.”

Yet other Republicans remained noncommittal about McCarthy. Asked if he still has the votes to be the party leader, Rep. Ralph Norman, R-S.C., said, “Time will tell.”

From the Democratic side, Rep. Hakeem Jeffries of New York, the caucus chairman who is also seen as a potential speaker candidate if Democrats retain control, dismissed the Republican strategy for winning back the House as nothing but lies.

Jeffries said it would be nice if, “instead of the infighting, the chaos, the shots fired against each other, the knife fights in a phone booth that is the modern day House Republican Conference, that they would actually decide to work with us on issues of importance to the American people.”