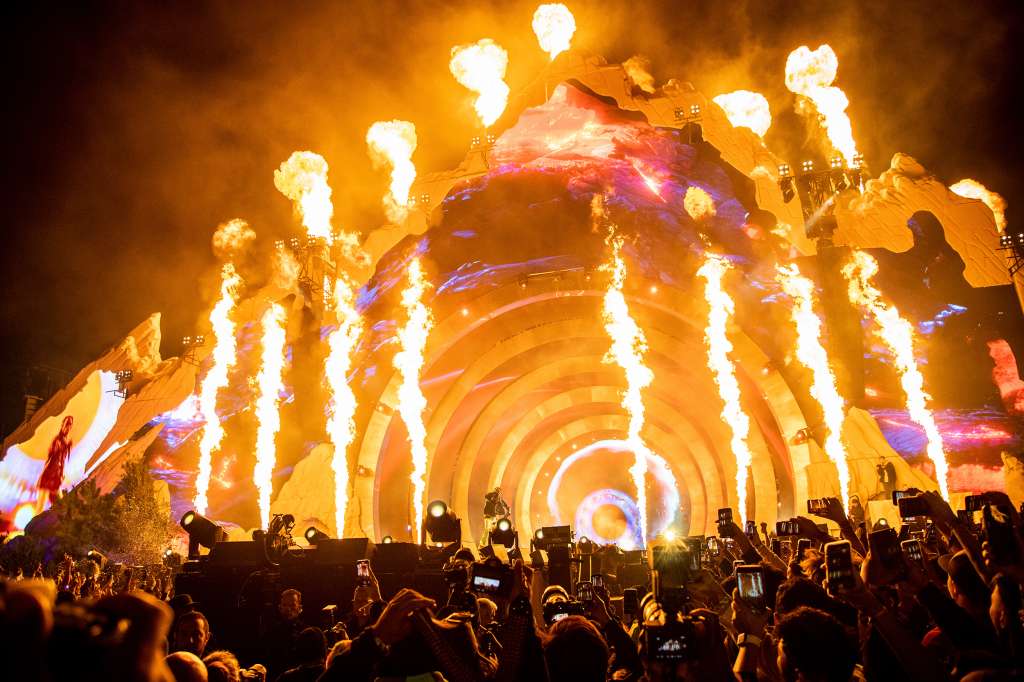 FILE - Travis Scott performs at Day 1 of the Astroworld Music Festival at NRG Park on Friday, Nov. 5, 2021, in Houston. Concertgoers described mounting anticipation for the headline rapper that led people to push toward the stage. (Photo by Amy Harris/Invision/AP, File)

(CNN) — The CEO of ParaDocs, the medic company hired by Astroworld organizers, spoke on camera for the first time Monday to “set the record straight” on what his team did and to defend how hard his staff of more than 70 people worked to save lives.

Alex Pollak told reporters his staff faced an “impossible feat” of treating 11 people with cardiac arrests at the same time. He said while an active threat like a crowd surge is underway, protocol prohibits them from going into a situation where they might risk personal harm. Yet his staff continued to go back into the dangerous crowd to help people.

“This is something I’ll have nightmares about for the rest of my life,” Pollak said. “The team is extremely broken up about it. Seeing so many young people getting CPR at one time, it’s just something no one should have to go through. Even though we’re medical professionals, we should be used it. You can’t get used to something like that.”

Days earlier, Houston officials said firefighters were not in contact with ParaDocs staff, and when firefighters did ask for radio communications they were instead given cell phone numbers, according to Patrick M. “Marty” Lancton, president of the Houston Professional Fire Fighters Association.

Pollak, who was working the concert, said ParaDocs staff did use radios provided by the event organizers.

The drop in communication was just one of many things that went wrong that Friday night when concertgoers were crushed, trampled and struggled to breathe as the packed crowd surged toward an outdoor stage when rapper and headliner Travis Scott started performing. A total of 10 people have died as a result of the chaotic concert.

Pollak said the standard ratio at these types of events is one medic per thousand people. ParaDocs had staff and resources in anticipation of 70,000 people, when the actual concert attendance was estimated around 50,000.

ParaDocs specializes in providing medical care at large events, Pollak said, adding that his team has a lot of experience in concert production lingo and logistics. They are typically brought in so that local first responders can continue to focus on regular 911 calls in their community. Pollak said ParaDocs does not own any ambulances, but five to seven ambulances were contracted to serve Astroworld.

‘We were presented with an impossible situation’

Remington Richardson, an emergency medical technician contracted by ParaDocs, recounted the desperate attempt to save lives that night in a series of TikTok posts.

“Being in this crowd is literally a life-threat,” Richardson said in the videos that were posted online last week.

Over three different videos, Richardson explained how he and three other medics waded through a sea of bodies shoulder to shoulder to provide life-saving help.

Richardson said in the videos that he would not name the company that contracted him, nor any of the other medics.

Richardson discussed how shocked he was when a concertgoer told him that no one had helped a girl who was lying on the ground for 10 minutes. She had no pulse and wasn’t breathing when he arrived, he said.

Richardson said he left her with another medic to get his crash bag and as he made his way back, he saw other two medics doing CPR on two more people.

Richardson described how people grabbed him for help as he moved through the crowd, but he “had to tell all of them, ‘I will try to come back for you, but people are literally dead right now that I need to go and help.'”

Richardson said his radio calls for backup didn’t seem to be going through, which he believes was because of how loud the concert was. “We were presented with an impossible situation,” he said.

He elaborated on the communications issues in a text message with CNN last week.

“For me personally, within the crowd the music was too loud for comms to be heard. All I know is that as soon as I saw +5 Houston Fire ambulances roll into the venue I jumped for joy because backup had arrived,” he said.

In the TikToks, Richardson defended the medics and EMTs and blamed the crowd of “over 50,000 highly irresponsible people” for what unfolded.

“There was zero crowd etiquette,” he said. “They didn’t give a single damn about anyone around them.”

He called members of the crowd who tried to shut down the show “heroes.”

CEO says challenge was getting in and out of venue

Additional information from fire and police officials at the festival reveals a situation that grew increasingly dangerous before and during Scott’s set. Ambulances took a handful of injured concertgoers to the hospital that morning and afternoon, according to Houston Fire Department logs.

HPD reported “dangerous crowd conditions” at one stage hours before Scott was set to perform. Eight minutes before Scott took the stage at 9 p.m., more than 260 people had already been treated, according to the logs, which did not specify the type of treatment. And a 9:18 p.m. entry noted a “crush injury.”

Less than half an hour into Scott’s performance, the log states: “This is when it all got real.”

Pollak, the ParaDocs CEO, said his staff — which includes former Army combat medics — performed CPR on the back of carts, but concert-goers were jumping on top of the carts, pulling them off of people.

“They thought it was a joke,” Pollak said, adding that no CPR patient was ever waiting for an ambulance to come.

“We never came close to running out of equipment and supplies. We could have treated at least double the amount of patients. We never expected in our lives to encounter a situation like that. It was absolutely horrific,” Pollak said.

He said the challenge was not resources or staff but the difficulty of getting in and out of the dangerous crowd to reach those in need of medical help.

He said it was one of Paradocs’ dispatchers at Unified Command who stood up and made the “mass casualty incident” declaration.

“What happened at Astroworld this weekend was a horrific tragedy, and the families of victims deserve answers. There may well be criminal liability, and that is why we continue to fully support the Houston Police Department’s criminal investigation,” said Rafael Lemaitre, communications director for Hidalgo.

“At the same time, Harris County continues its process of identifying a separate independent, third party to look into any operational or administrative steps — beyond anything criminal — that could have been taken to prevent this from happening.”

Hidalgo failed to get the support necessary from Harris County Commissioners to conduct an independent investigation, she told reporters Monday.

“I really tried to do my absolute best in public and in private to push for this,” Hidalgo said. “What the commissioners supported is an independent look at the events that are scheduled for NRG park to make sure that they’re following best practices.”

The motion that was passed unanimously by Harris County Commissioners Court supported HPD’s investigation and directed the County Administrator “to meet with the Harris County Sports Convention Corporation and the Houston Harris County Sports Authority to conduct an independent review of the security, fire, life, and safety plans of all scheduled outdoor concerts on NRG park property.”

The review would also be in coordination with the mayor’s office and “relevant departments,” the motion read.

“The wording is so vague that really not much comes of it,” Hidalgo said.

The reasons why county commissioners didn’t support Hidalgo’s proposal are unclear because the discussions happened in executive session, which are not public.

“An item could open a door for liability that the county currently is not exposed to. And so if there is that possibility, I’d like to discuss this in an executive session,” Garcia said.