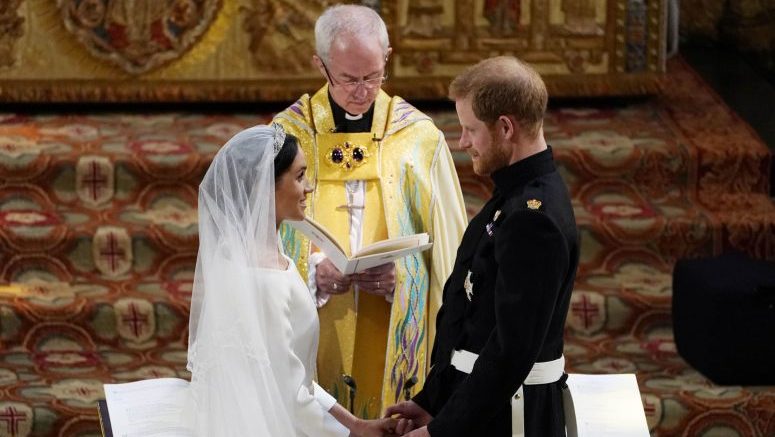 The Archbishop of Canterbury, Justin Welby (center), has confirmed that the Duke and Duchess of Sussex were not married prior to their televised wedding, seen here in 2018. Credit: OWEN HUMPHREYS/AFP/Getty Images
CNN

(CNN) — The Archbishop of Canterbury, Justin Welby, has confirmed that the Duke and Duchess of Sussex were not legally married prior to their televised wedding, clarifying comments made by the duchess in the couple’s bombshell interview with Oprah Winfrey.

The interview contained plenty of revelations, including the news that Meghan and Harry had exchanged vows in private a few days before the ceremony.

“You know, three days before our wedding, we got married,” said Meghan. “No one knows that. The vows that we have framed in our room are just the two of us in our backyard with the Archbishop of Canterbury.”

The duchess didn’t elaborate on the private service, but many people deduced that it wasn’t legally binding because of the absence of witnesses.

Welby, who led the couple in their public vows on May 19, 2018, has now shed more light on events.

“The legal wedding was on the Saturday. I signed the wedding certificate, which is a legal document, and I would have committed a serious criminal offense if I had signed it knowing it was false,” Welby said, in comments first reported by Italian newspaper La Repubblica and confirmed to CNN by Lambeth Palace.

“So, you can make what you like of that. But the legal wedding was on the Saturday, but I won’t say what happened at any earlier meetings,” the archbishop added.

Prince Harry and Meghan Markle married at St. George’s Chapel in Windsor, becoming the Duke and Duchess of Sussex.

However, in January last year, the pair announced they would step back from the royal family.

Earlier this month, they used a heavily publicized interview with Oprah to discuss their experiences, including allegations of racism within the family itself and Meghan’s admission that she felt suicidal during her pregnancy.

The two-hour TV special was highly anticipated because Harry and Meghan are now allowed to speak more freely about the royal family after their effective split from the palace.

In one of the interview’s most startling revelations, Meghan said an unnamed member of the family raised the issue of how dark their unborn baby Archie’s skin would be while she was pregnant.

There were several “concerns and conversations about how dark his skin might be when he was born,” she said.