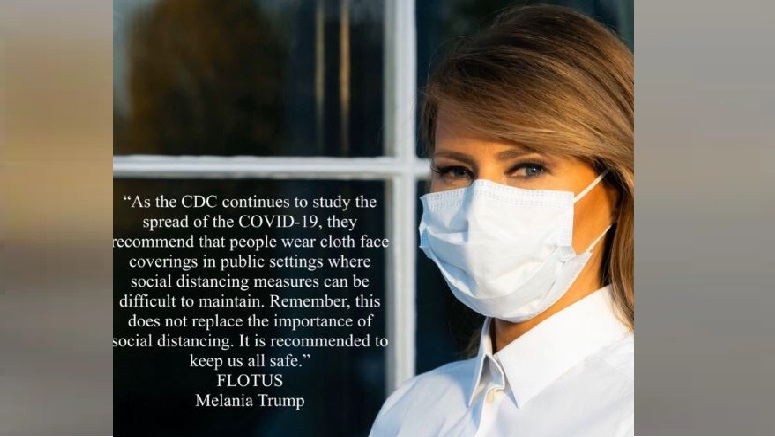 (CNN) — First lady Melania Trump shared a photo of herself wearing a cloth face mask in the wake of the coronavirus pandemic, becoming the first member of the Trump family to publicly don a face covering.

“As the CDC studies the spread of #COVID-19, they recommend people wear cloth face coverings in public settings when social distancing can be hard to do,” the first lady posted on her social media accounts. “Remember, this does NOT replace the importance of social distancing.”

The tweet with the still photo came shortly after Trump posted a video of herself holding the mask in her hands, stating the US Centers for Disease Control and Prevention guidelines.

The first lady’s visual endorsement of federal guidelines for wearing cloth face coverings comes several days after the CDC updated its guidance for the public. On April 3, the recommendations were adjusted to suggest Americans wear non-medical cloth coverings when in public, in large part to prevent the spread of the virus via those who are asymptomatic carriers.

Trump taped both Thursday’s video message and one posted Wednesday thanking medical personnel and frontline workers earlier this week at the White House, according to a White House official.

Initial guidelines at the onset of the pandemic were that face masks were not necessary for the general public for the purposes of avoiding getting sick. The President, when announcing the new measures, stressed the guidelines were voluntary.

“I’m choosing not to do it,” said Trump at the time.

Within minutes of the President’s initial announcement about the updated CDC guidelines, the first lady posted for the first time on her Twitter account the importance of wearing one.

On Sunday, the President was asked during a press briefing about the first lady’s support of face coverings, as he has several times stated he would not wear one.