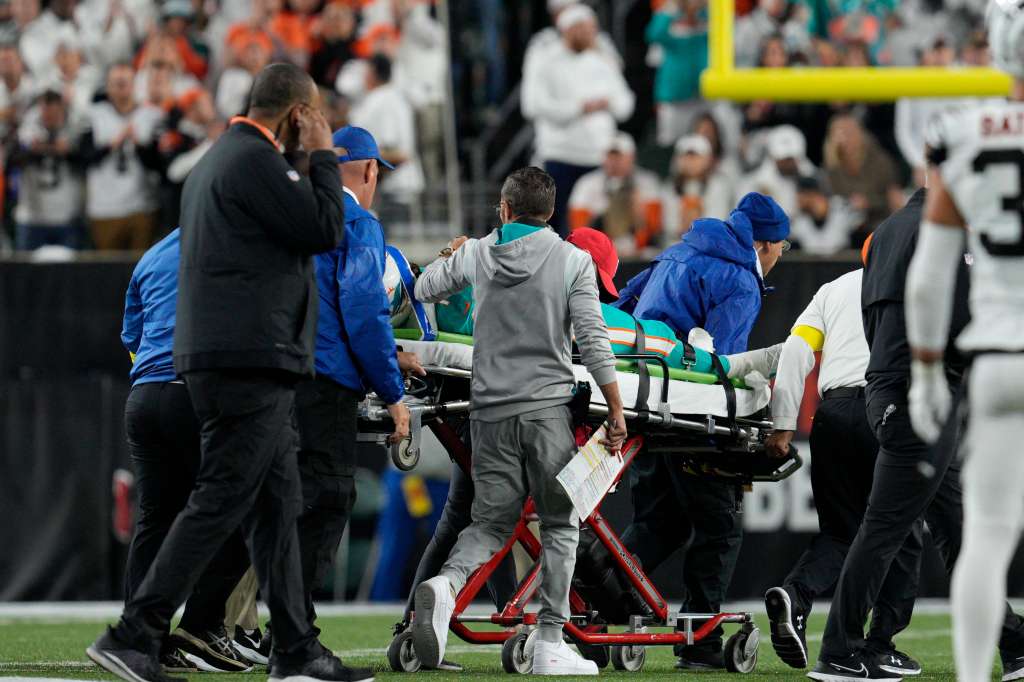 Miami Dolphins quarterback Tua Tagovailoa is taken off the field on a stretcher during the first half of an NFL football game against the Cincinnati Bengals, Thursday, Sept. 29, 2022, in Cincinnati. (AP Photo/Jeff Dean)

(CNN) — The Miami Dolphins quarterback Tua Tagovailoa was taken off the field on a stretcher on Thursday during a game against the Cincinnati Bengals, after suffering apparent head and neck injuries — less than a week after being injured in another game.

Tagovailoa is conscious, has movement in all his extremities and was taken to a local hospital for further evaluation, the team said in an update. It added that he is expected to be released from the University of Cincinnati Medical Center and travel back to Miami with the team on Thursday night.

Miami Dolphins head coach Mike McDaniel confirmed after the team’s 27-15 loss that Tagovailoa had suffered a concussion — a traumatic brain injury caused by a blow to the head.

In the second quarter, Tagovailoa was sacked by Bengals defensive lineman Josh Tupou and laid motionless on the field for several minutes.

The entire Dolphins sidelines walked onto the field as Tagovailoa was placed on the backboard and stretcher.

Bengals fans in attendance at Paycor Stadium in Cincinnati showed their respect as Tagovailoa was carted off the field.

“It was a scary moment,” McDaniel said after the game. “He was evaluated for a concussion and is in concussion protocol …That was an emotional moment. That is not part of the deal anyone signs up for even though you know its a possibility in football.”

“All of his teammates, myself, we were all very concerned,” he added.

In a statement Thursday night, the National Football League Players Association (NFLPA) said player health and safety were at the “core” of their mission.

“Our concern tonight is for Tua and we hope for a full and speedy recovery,” it said. “Our investigation into the potential protocol violation is ongoing.”

The incident comes just days after Tagovailoa suffered another apparent head injury last Sunday in a game against the Buffalo Bills.

He had exited the game in the second quarter after a hit from linebacker Matt Milano caused his helmet to hit the turf. On his way back to the line of scrimmage, Tagovailoa stumbled and almost lost his balance.

He was then checked for a concussion and cleared, and came back out onto the field in the third quarter.

Afterward, the NFLPA toldthe National Football League (NFL) it wants to initiate a review into the handling of Tagovailoa’s apparent head injury.

The Dolphins later said Tagovailoa suffered a back injury, not a head injury.

Tagovailoa was listed as questionable to play before tonight’s game with a back injury.

On Thursday, McDaniel defended the team’s decision to play Tagovailoa despite the previous injury, saying an independent doctor specializing in “brain matter” had cleared him to play.

“For me, as long as I’m coaching here, I’m not going to fudge that whole situation — if there’s any sort of inclination that someone has a concussion, they go into the concussion protocol,” he said. “We don’t mess with that. I never have and as long as I’m the head coach, it will never be an issue that you guys have to worry about.”

When asked if there was anything different the team could have done after Tagovailoa’s injury on Sunday, McDaniel responded with a resounding “absolutely not.”