Migrants split on whether to keep walking through Mexico 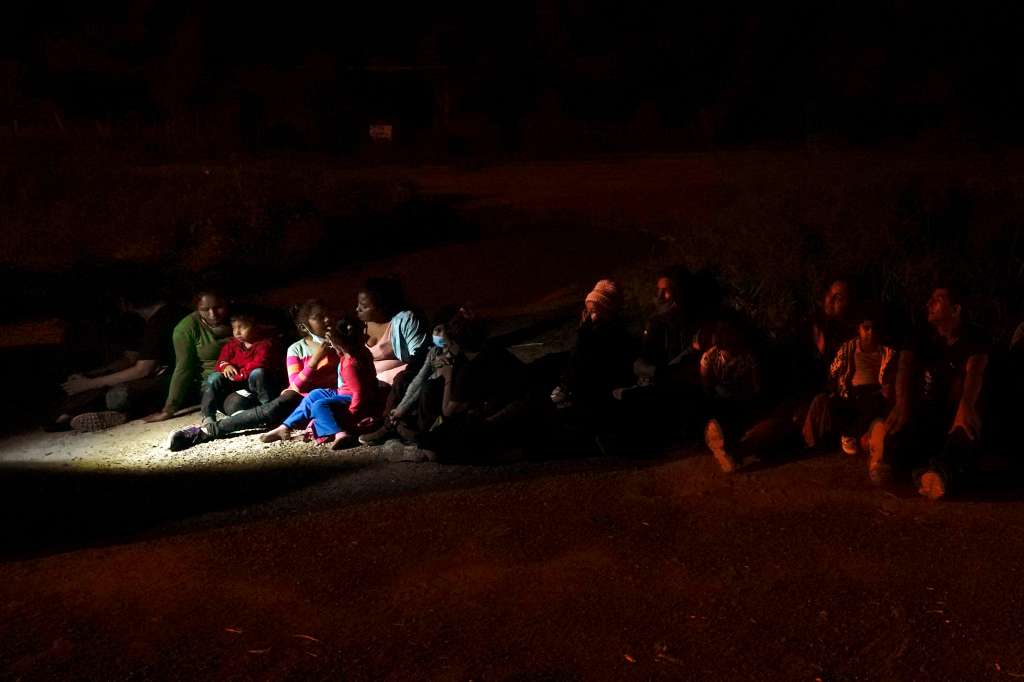 Migrants mainly from Honduras and Nicaragua seeking asylum sit in line after turning themselves in upon crossing the U.S.-Mexico border, in La Joya, Texas, May 17, 2021. Credit: Gregory Bull/AP

VILLA COMALTITLÁN, Mexico (AP) — A group of migrants that once numbered as many as 5,000 split on Thursday about whether to keeping walking through southern Mexico toward the U.S. border.

A group of about 2,000 mainly younger male migrants set out walking Thursday from the southern town of Huixtla.

But about 1,000 migrants, mainly families with children, decided to wait in Huixtla to see if they could get some sort of temporary exit visa. The families were tired after walking some 25 miles since departing the city of Tapachula, near the Guatemalan border, on Monday.

The goal of almost all the migrants is to reach the U.S. border. But none of the migrant caravans that have crossed Mexico starting in 2018 have ever walked all the way to the border, which is over 1,000 miles to the north.

While some caravan participants reached the border in the past, it was due to bus or car rides — which the government now tries to prevent.

Some of the migrants who apparently already got papers in Huixtla seemed to have left by their own means; with the exit visas. They may be able to take buses or taxis.

Venezuelan migrant Junior Ramírez was still waiting for papers with about 15 members of his extended family at a National Immigration Institute post outside Huixtla, where the migrants slept in the open air on Tuesday and Wednesday.

“Up to now they haven’t told us whether they are going to give them to us,” Ramírez said. “Other migrants have gotten them and left. All we want to do is keep going.”

Luis García Villagrán, a migrant advocate traveling with the caravan, said Mexican authorities have been giving out the equivalent of exit visas, which give migrants between one and three months to leave the country.

Theoretically, a migrant carrying such papers will either request asylum or leave Mexico — presumably over the U.S. border — and wouldn’t be sent back to their home country.

Josué Mendoza Rojas and Josmar de Nazaret Cárdenas, two other Venezuelan migrants, were in the same situation in Huixtla, trying to decide whether to keep walking.

“It’s all confused,” said Mendoza Rojas said, referring to the fact that migrants had tried to draw up their own lists of who would be in line to get papers. “There are about 40 lists, and some people left without papers.”

The couple left Venezuela two months ago with their 1-year-old child and applied for an asylum appointment in Tapachula. But they couldn’t get an appointment until August, and without enough money to wait until then, they decided to leave and start walking north.

Venezuelans make up a large proportion of this caravan, the biggest of the year, in contrast to previous ones. A factor appears to be a policy change implemented by Mexico in January requiring Venezuelans to acquire a visa to enter the country.

Before that change, Venezuelans had flown to Mexico City or Cancun as tourists and then made their way comfortably to the border. Many made it from home to the U.S. border in as little as four days.

The Mexican visa requirement drove the flow of Venezuelans into the shadows. Those traveling in the caravan are just the visible sign of who is traveling through Mexico out of public view. Many other Venezuelans have likely turned to smugglers.

Encounters with Venezuelans at the southwest border plunged from 22,779 in January to 3,073 in February, according to U.S. Customs and Border Protection. In April, the most recent month available, there were 4,103 encounters.

But the flow of Venezuelan migrants has continued. Since January, more than half of the 34,000 migrants who crossed the treacherous Darien Gap between Colombia and Panama were Venezuelans, according to Panama’s National Migration Service.

Trying to avoid the dangerous, jungle-shrouded Darien Gap, some migrant smugglers have apparently begun offering a sea route into Panama.

Security officials in Panama said Thursday they had caught eight Colombian smugglers carrying 92 migrants — including Venezuelans and Ecuadorans, among them 12 minors — on Panama’s Caribbean coast.

Recently, the Mexican government has dissolved other caravans by offering to move migrants to other cities where they could legalize their status more quickly. In some cases, the government has tried to tire the migrants out by preventing passing trucks and buses from giving them rides.

Finding consensus on managing migration flows in the region was a top priority for representatives meeting this week at the Summit of the Americas in Los Angeles.