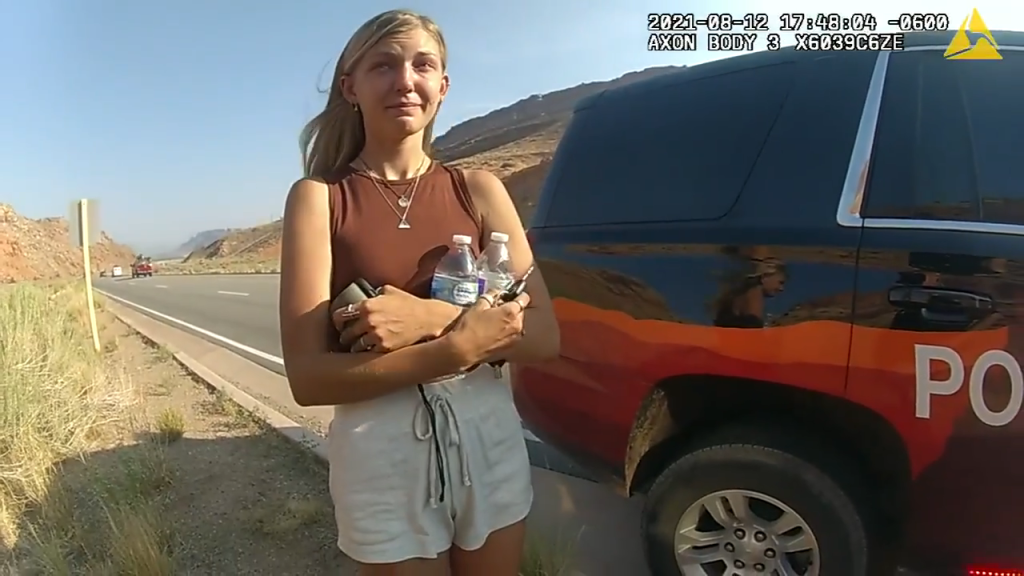 (CNN) — The city of Moab, Utah, said it is launching an investigation into the Moab City Police Department’s handling of a dispute between Gabby Petito and Brian Laundrie in August several weeks before she was killed.

Moab said in a statement the police department has received both praises and criticism for “their response and their resolution of the incident involving Ms. Petito and Mr. Laundrie.”

“The Moab City Police Department has clear standards for officer conduct during a possible domestic dispute and our officers are trained to follow those standards and protocol,” the city said. “At this time, the City of Moab is unaware of any breach of Police Department policy during this incident. However, the City will conduct a formal investigation and, based on the results, will take any next steps that may be appropriate.”

The investigation stems from police interactions with Petito, 22, and Laundrie, 23, on August 12 in the midst of their #VanLife road trip to parks in the American West. In Moab, a bystander called 911 to report a possible domestic dispute involving the couple and their white van, and the ensuing police interaction was captured by police body-camera footage and a police report.

The dispute, as well as an incident at a Wyoming restaurant, illuminates the growing stresses and tensions in their relationship even as they documented a sunnier version of their journey on social media.

The police interaction came about two weeks before Petito last communicated with her family. Laundrie returned to his parents’ home in Florida without her on September 1, and her family reported her missing 10 days later. Her body was found on Sunday in Wyoming near where the couple had last been seen together, and a coroner determined she died by homicide.

Laundrie, who had declined to speak with investigators, has been missing since last week.

With the power of hindsight, Moab said investigators will be gathering all the facts and evidence to evaluate the police response to the incident.

“We understand that individuals can view the same situation in very different ways, and we recognize how the death of Ms. Petito more than two weeks later in Wyoming might lead to speculation, in hindsight, about actions taken during the incident in Moab. The purpose of the City’s formal investigation is to gather the underlying facts and evidence necessary to make a thorough, informed evaluation of such actions,” according to the city.

The police department will make all information from the Petito incident available to agencies investigating her death, and officers will also be available to answer any questions, the statement said.

Moab City Police Chief Bret Edge said an unidentified “outside party” had filed a request with the 15-officer department for a formal investigation into the August 12 police encounter with the couple, according to a statement from Edge on Thursday.

“We take all complaints seriously and we are committed to fully addressing these concerns,” Edge said. “In compliance with police department policy, we will conduct an investigation. The police department will identify an unaffiliated law enforcement agency to conduct the formal investigation on our behalf.”

The chief added, “Should the investigation identify areas for improvement we will take that information to heart, learn from it, and make changes if needed to ensure we are providing the best response and service to our community.”

What the report and body-camera footage show

The police interaction began with a call from a witness who saw what he believed to be a concerning incident. In the 911 audio from that day, which was provided by the Grand County Sheriff’s Office, the caller told dispatch he wanted to report a domestic dispute involving a couple who drove away in a white van.

“We drove by and the gentleman was slapping the girl,” the caller said. “Then we stopped. They ran up and down the sidewalk. He proceeded to hit her, hopped in the car and they drove off.”

In a report from Moab police, another witness named Christopher told police he saw the couple arguing over a phone. The witness said that when Laundrie got into the van, Petito appeared to hit him in the arm and then climbed through the driver’s side door as if he had locked her out, the report states.

Police located the van and pulled the couple over after the vehicle exceeded the speed limit, abruptly left its lane and struck a curb, according to the police report. The officer walked up to the passenger side of the vehicle, where a crying Petito told him, “We’ve just been fighting this morning. Personal issues,” according to the body-camera footage.

After interviewing Petito, Laundrie and the witness, the officers describe the incident as an argument that turned into a physical fight involving pushing and scratching.

Laundrie had minor visible scratches on his face and right arm, but “had no fear for his safety” and “did not exhibit any indicators that he may be a victim of ‘battered boyfriend syndrome,'” the report notes. “He was assessed to be at low risk of danger or harm as a result of his proximity to his fiance.”

Petito, meanwhile, was crying uncontrollably and breathing heavily, the report notes. She is described in the report as being in a “confused and emotional state.”

In the body-camera footage, one officer explains that they consider Petito to be the aggressor and Laundrie to be the victim. No charges were filed, and at officers’ suggestion, the couple separated for the night, with Laundrie staying at a hotel and Petito taking the van.

“(B)oth the male and female reported they are in love and engaged to be married and desperately didn’t wish to see anyone charged with a crime,” officer Eric Pratt writes in the report.

“After evaluating the totality of the circumstances, I do not believe the situation escalated to the level of a domestic assault as much as that of a mental health crisis,” officer Daniel Robbins wrote in the report. “I then determined the most appropriate course of action would be to help separate the parties for the night so they could reset their mental states without interference from one another.”

Petito and Laundrie agreed with that plan, the report states. They had their own cell phones in case of emergency, the report adds.

The police report also notes that two National Park Service officers responded to the scene. One of the officers, Melissa Hulls, told Deseret News that she spoke with Petito and warned her that her relationship with Laundrie had the markings of a “toxic” one.

“I was imploring with her to reevaluate the relationship, asking her if she was happy in the relationship with him, and basically saying this was an opportunity for her to find another path, to make a change in her life,” Hulls told Deseret News.

“This wasn’t a good day for anybody,” she added. “We thought we were making the right decision when we left them.”