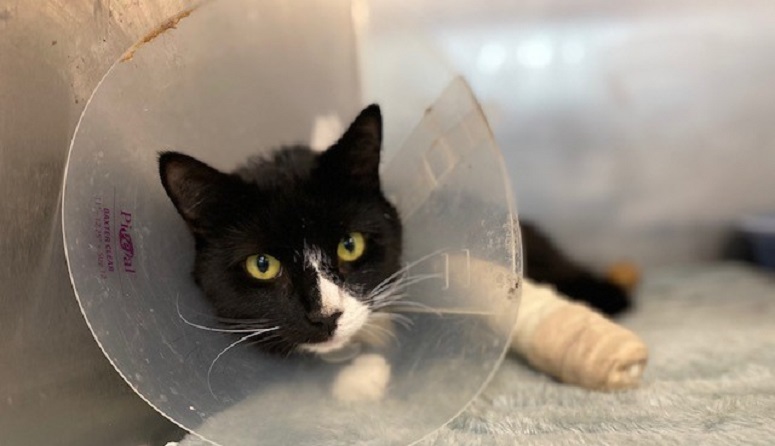 BOSTON (WHDH) - The Massachusetts Society for the Prevention of Cruelty to Animals is hoping to find the owner of a 3-year-old cat who suffered severe burns from a car engine while seeking shelter on a frigid fall evening.

The black-and-white domestic short-haired cat named Dale was brought to the MSPCA-Angell on Oct. 20 by Boston Animal Control after he was found meowing in pain underneath a car’s hood on Monmouth Street.

Dr. Rebecca Fellman, of the MSPCA’s Boston Animal Care and Adoption Center, says the severity of Dale’s burns became more clear after a few days and that he had to undergo several surgeries to clean and eventually close the wounds.

“We’ve been treating him with tissue debridement procedures—removal of dead tissue so that new tissue may heal—as well as with bandaging, antibiotics and pain medication, and even though some of the wounds have not closed because of their size or location, we’re hoping they will eventually heal,” she said.

Victoria Odynsky, manager of the MSPCA’s Boston adoption center, added that Dale is recovering well and they are now hoping to find his owner.

“He’s really friendly and social so we know he once had a home—and we’re hoping that by drawing attention to his plight, an owner may step forward to claim him,” she said. “Should no one claim Dale, we’ll place him into a wonderful loving home as soon as he’s medically ready to leave the safety of the shelter.”

Dale did not have identification tags or a microchip, according to the MSPCA.

Anyone with information about his owner or those interested in adopting can email adoption@mspca.org.