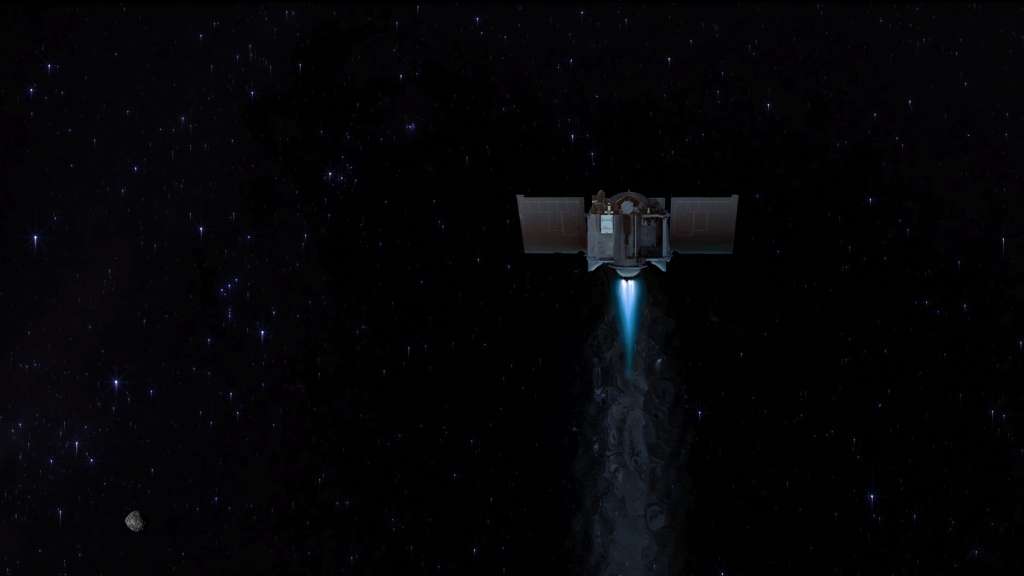 This illustration shows the OSIRIS-REx spacecraft departing asteroid Bennu to begin its two-year journey back to Earth. Credit: Goddard/University of Arizona/NASA
CNN

(CNN) — A NASA spacecraft will bid farewell to its asteroid companion of the last few years.

The OSIRIS-REx spacecraft is conducting a final flyby of the asteroid Bennu on Wednesday.

The spacecraft made history when it briefly touched down on the asteroid on October 20, 2020, and collecting a hefty 2-ounce sample from the surface.

The sample, safely tucked inside the spacecraft, will be returned to Earth in 2023.

The OSIRIS-REx mission, formally known as the Origins, Spectral Interpretation, Resource Identification, Security, Regolith Explorer, first arrived at the asteroid in December 2018 and has been orbiting it ever since.

During Wednesday’s flyby, the spacecraft will get one final close-up of Bennu, capturing images of the asteroid’s surface from just 2.3 miles away. The images should reveal the aftermath of the sample collection event in October, which was a messy affair.

The asteroid’s surface was disturbed when OSIRIS-REx’s sampling head sank 1.6 feet down into the surface of the asteroid. It fired a charge containing nitrogen gas to disturb surface material to make sample collection a little easier. The thrusters on the spacecraft also launched material in the air as the spacecraft backed away from the asteroid after collecting the sample.

The gravity on the asteroid is weak, so rocks and dust were launched and scattered throughout the process.

Images captured by the spacecraft Wednesday will show scientists just how much the sample collection event altered the surface of the asteroid. The spacecraft will spend nearly six hours imaging Bennu, which will allow its cameras to see the asteroid complete a full rotation.

The route of this flyby is familiar for OSIRIS-REx, which conducted a similar one while searching for a landing site during surveys in 2019. Those images from 2019 will be used with the new images to create before and after comparisons.

During the flyby, OSIRIS-REx’s instruments will collect data, allowing the mission team a chance to assess them after the tools were coated in dust during the collection event. The spacecraft may go on an extended mission after dropping off Bennu’s sample at Earth in September 2023, so this evaluation can help teams make that determination.

Days after the flyby, all of the images and data will be sent back to the mission teams so they can analyze the changes to Bennu and evaluate the spacecraft’s instruments.

OSIRIS-REx will hang out in the area around Bennu until May 10, then it will begin a two-year and 200-million-mile journey back to Earth.

“Leaving Bennu’s vicinity in May puts us in the ‘sweet spot,’ when the departure maneuver will consume the least amount of the spacecraft’s onboard fuel,” said Michael Moreau, OSIRIS-REx deputy project manager at NASA’s Goddard Space Flight Center in Greenbelt, Maryland, in a statement.

“Nevertheless, with over 593 miles per hour (265 meters per second) of velocity change, this will be the largest propulsive maneuver conducted by OSIRIS-REx since the approach to Bennu in October 2018.”

The sample from the asteroid could shed more light on the formation of the solar system and how elements like water may have been delivered to early Earth by impacts from asteroids.

Once OSIRIS-REx approaches Earth in 2023, it will jettison the capsule containing the sample, which will shoot through Earth’s atmosphere and parachute down into the Utah desert.

A team will be ready to retrieve the sample and transfer it to an aircraft hangar that will serve as a temporary clean room. The sample will then be whisked away to labs that are currently under construction at Johnson Space Center in Houston.

“OSIRIS-REx has already provided incredible science,” said Lori Glaze, NASA’s director of planetary science, in a statement. “We’re really excited the mission is planning one more observation flyby of asteroid Bennu to provide new information about how the asteroid responded to (the Touch-and-Go Sample Collection event) and to render a proper farewell.”