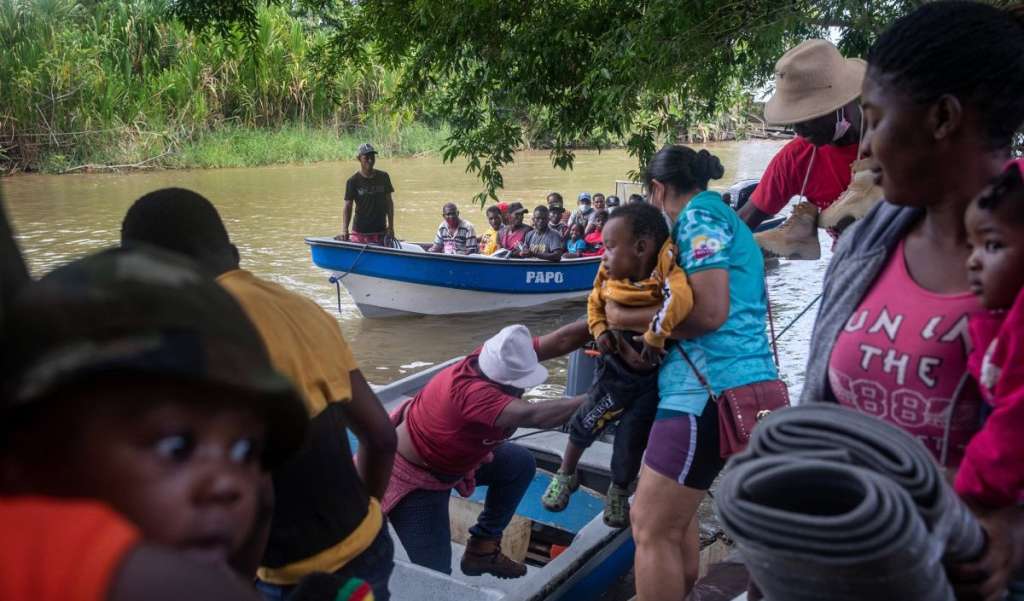 Haitian immigrants arrive by boat in Acandi, Colombia, to begin their overland journey through the Darien Gap into Panama and on towards the United States. Credit: John Moore/Getty Images

(CNN) — A record number of children crossed on foot the treacherous stretch of jungle between Colombia and Panama known as the Darien Gap this year: 19,000, half of whom were under 5 years old, according to UNICEF.

The infamous 60-kilometer (37-mile) trek north brings migrants from Colombia to Panama — a crucial passage out of South America for those hoping to reach the United States and Canada.

Travelers trying to make it through — many of them from Haiti — have reported robberies, corpses, mutilations and rape in the dense forest along the route.

For children, the dangers are acute. At least five children have been found dead in the jungle, and more than 150 children ended up arriving in Panama without their parents, according to UNICEF, which has been working with other organizations and government agencies to assist migrants at both ends of the journey.

“We see a lot of children being separated from their parents during this horrendous trip, so when they arrive, they’ve been picked up by someone who was just walking by. Sometimes babies or very young children are picked up by strangers and brought to our reception centers,” Sandie Blanchet, UNICEF’s representative in Panama, told CNN.

As more and more vulnerable people pass through the area, organized crime has also taken root.

Sexual violence is increasingly an “instrument of terror” wielded by criminal gangs operating around the Darien Gap, according to UNICEF. Minors are sometimes targeted; the agency has registered 29 reports of sexual abuse of adolescent girls since January, in addition to assaults on women.

“One of the things that shocked me when I was in one of the reception centers is hearing women who were raped and who were asking for just for new clothes. They were still wearing the clothes they were wearing when they were raped. And they wanted just to get rid of these clothes,” said Blanchet.

Even for families who manage to stay together, the week-long hike is brutal.

“What parents have told us is that they start the journey with some water and some food, but they don’t realize how far it is and how long it’s going to take them,” Blanchet said. “So at some point during the trip, they don’t have water, food, there’s nothing available, so they start drinking the water from the river, which is not potable.”

Children emerge from the jungle weak with dehydration and fatigue, and often plagued by skin diseases from tropical insects, she added.

On top of this are what Blanchet called “the invisible wounds” left by the journey.

“Many of these kids have gone through a terrible time, they have seen things they should not have seen,” she said.