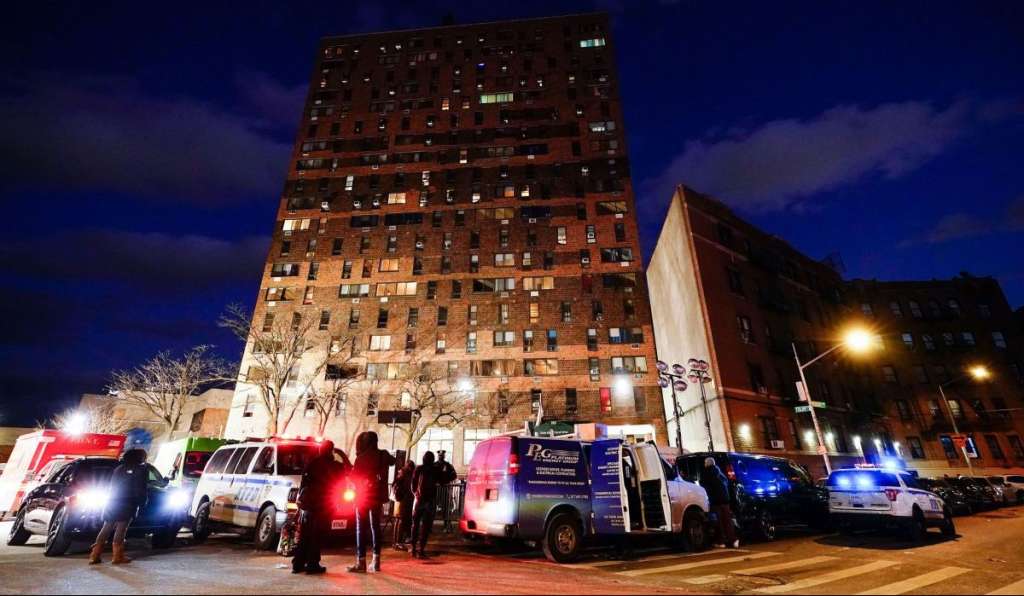 An apartment building which suffered the city's deadliest fire in three decades is seen in the Bronx borough of New York, Monday, Jan. 10, 2022. (AP Photo/Matt Rourke)

The March 1986 fire was documented in FDNY’s official training publication, WNYF, in which members of the department write about fire incidents, highlighting protocols and training, according to a FDNY spokesperson.

The article said smoke from the 1986 fire was banked down to the floor and engulfed entire hallways, seeping through the bottom of closed apartment doors “creating frightening and in some cases untenable conditions for the occupants inside.”

A “malfunctioning” electric space heater in a duplex unit on the second and third floors sparked the fire and as the apartment’s residents fled, their door was left open, allowing the flames to spread as smoke traveled upward and took over much of the building, Fire Commissioner Daniel Nigro said Sunday.

The door from the stairwell to the 15th floor was also left open, even though the doors were supposed to close automatically, officials said.

“The smoke spread throughout the building. Thus, the tremendous loss of life and other people fighting for their lives right now in hospitals all over the Bronx,” Nigro said.

The 1986 fire was believed to have originated in the building’s trash compactor, the WNYF article said.

Although no one died in the 1986 incident, the FDNY noted several fire safety issues in the building, including doors that were left propped open and contributed to the “severe smoke condition on all upper floors,” according to the publication.

The case study highlighted that a stairwell door propped open “to increase the normal ventilation” on one floor in conjunction with compactor shaft doors that were propped open on different floors “contributed to the severity of the subsequent fire,” the article reads.

The manner of death for all the victims of Sunday’s fire was determined to be an accident, according to the New York City Office of the Chief Medical Examiner (OCME).

They ranged in age from 2 to 50-years old, police said.

Some residents have been able to return to the top floor apartments, the New York City Emergency Management (NYCEM) told CNN.

“The process is ongoing and evolving,” said spokesperson Ines Bebea.

The agency was unable to provide a timeline for when or how many people will reenter the building, as the building’s management is notifying residents individually and “not rushing people back into their apartments,” Bebea said.

Tenants and relatives of the victims filed a class-action lawsuit against the current and previous owners of the building seeking $2 billion in damages, according to court documents.

The city and various entities were also given notice of a separate class-action lawsuit seeking $1 billion in damages for alleged negligence in enforcing building codes.

In a statement to CNN, New York City Law Department press secretary Nicholas Paolucci said, “This was a horrific tragedy and too many lives were lost. There is an active investigation into this tragic incident. We’ll review the claim.”

City data shows there were at least four heat-related complaints and one complaint about a defective self-closing door reported last year to the Department of Housing Preservation and Development, the agency that oversees housing development violations in the city.

Some violations had been repaired, according to the agency.

“HPD is working to make sure that critical violations have been addressed and apartments are safe for return,” spokesperson Jeremy House told CNN in a statement Wednesday.

Bronx Park Phase III Preservation LLC, which purchased the complex in 2019 and is named in one of the lawsuits, issued a short statement.

“We are devastated by this terrible tragedy and are cooperating fully with the Fire Department and other agencies as they continue to investigate.”

Attorney Robert Vilensky said he represents 22 plaintiffs in the lawsuits but expects that number to grow.