NOAA calls for a warmer winter, which could be good for your bank account 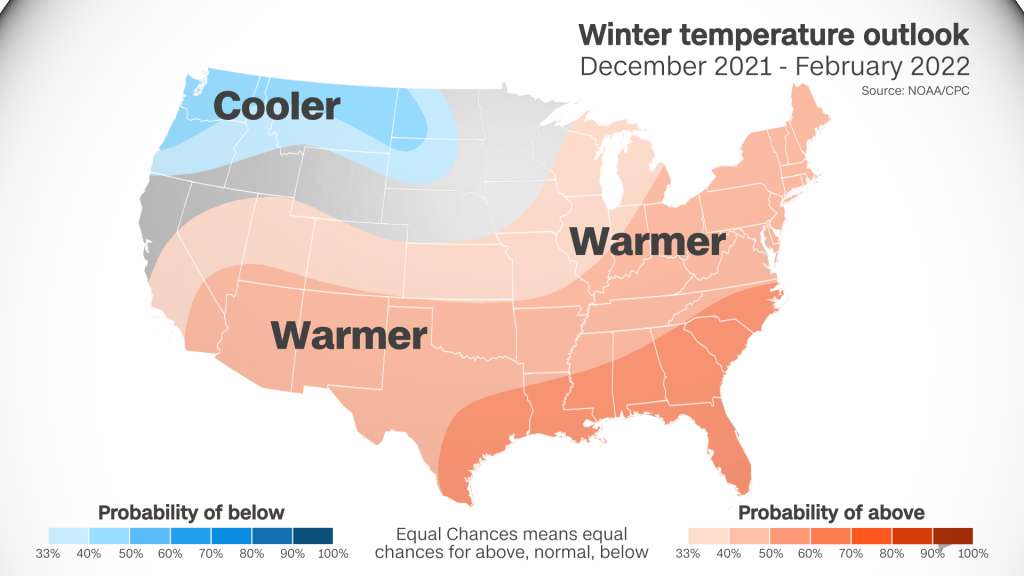 (CNN) — The southwestern US will continue to struggle through drought conditions this winter, the National Oceanic and Atmospheric Administration predicted Thursday in its outlook for the coming winter.

In all, cooler and wetter conditions are forecast across portions of the northern tier of the country, with warmer and drier conditions for much of the southern tier — in line with a typical La Niña weather pattern.

The Southwest may suffer the most from this forecast. The area is drought-stricken and most likely won’t get relief through the winter.

More than 90% of the West is in drought conditions, and more than half of the region is in extreme or exceptional drought. California has just faced its driest year in nearly a century as the state continues a statewide drought emergency.

The Southwest will not only be dry, it will also continue to be warmer. In fact, the entire southern half of the country — Midwest, Ohio Valley and Eastern Seaboard — is forecast to have a warmer-than-average winter.

A wetter-than-normal season is forecast for portions of the Midwest, Ohio Valley and New England, as well, NOAA said.

“There tends to be below-normal precipitation along the southern tier of the US, and with that being the expectation for what we are favoring in the outlook, we do expect the drought to persist along many places in the Southwest,” Gottschalck said.

Even with a stronger monsoon season in the Southwest, that wasn’t enough to quell the drought.

NOAA’s forecast looks at the season as a whole. And after all, it’s just a forecast — nothing is guaranteed.

Huge savings may be in store for families this winter

If parts of the country are indeed warmer than average, that could mean a huge savings for families.

“As we have moved beyond what we expect to be the deepest part of the pandemic-related economic downturn, growth in energy demand has generally outpaced growth in supply,” EIA Acting Administrator Steve Nalley said in a statement. “These dynamics are raising energy prices around the world.”

The agency warned that consumers will spend even more if the weather is colder than anticipated.

Those areas in the Pacific Northwest and northern Rockies where the forecast for winter is expected to be colder-than-normal could be hit the hardest with the higher prices.

But places where the forecast may be warmer than normal could see a huge savings.

“Warmer-than-normal temperatures could help save Americans on home heating costs, which could be elevated this year due high energy prices,” said CNN Business reporter Matt Egan.

Energy prices surged nearly 25% over the past year, including a 42% spike in gasoline and a 21% jump in utility gas service.

A similar forecast last year didn’t all pan out

Last winter also saw a La Niña, and NOAA’s forecast then was in line with typical La Niña expectations: cooler and wetter across the northern tier of the US and drier and warmer than average across much of the southern US.

But last year’s forecast did not pan out for NOAA in many locations.

“In fact, this past December-January was the least La Niña-ish pattern of 13 moderate-to-strong La Niñas dating back to 1950. Why? Who knows! But the influence of chaotic weather variability is always there. Yes, even during a La Niña, mother nature can just BE that way sometimes,” meteorologist Tom Di Liberto wrote in March in a NOAA blog post.

Last winter’s most extreme example was the record-breaking deep freeze experienced across the southern Plains, despite the expectation of above-average temperatures. Most notably, Texas shattered numerous records and cold temperatures crippled the power grid.

While December and January did end up slightly above normal, temperatures in February were so far below average that the winter as a whole ended up below average.

“Yup, that means the colder-than-average seasonal temperatures in Texas and Oklahoma are simply due to the absolutely freezing temperatures over just a couple weeks during the end of winter,” Di Liberto wrote.

“There is a whole heck of a lot of uncertainty when you make predictions that far into the future. A lot of stuff can happen that couldn’t be foreseen when the forecast was made last fall,” Di Liberto wrote.

And even if a forecast of warmer (or cooler) than average comes true, remember: This is an average over a three-month period. It doesn’t mean that there won’t be spells of colder (or warmer) conditions.