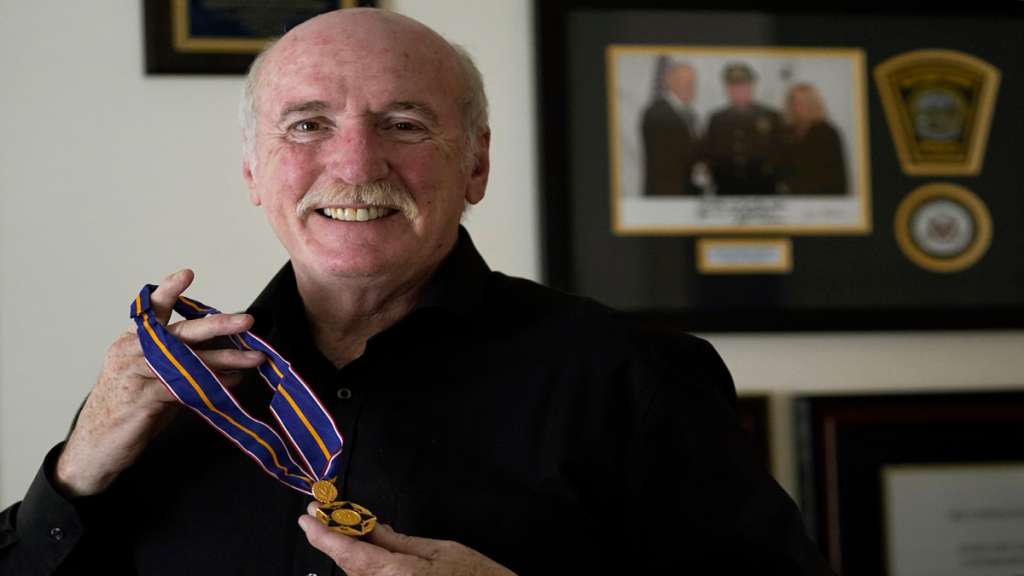 Retired Watertown police Sgt. Jeffrey Pugliese stands for a photograph, Tuesday, June 1, 2021 at his home in Watertown, Mass., as he displays the Medal of Valor that was awarded to him in February 2015 by then Vice President Joe Biden and Attorney General Eric Holder during ceremonies in Washington. Pugliese, who became a national hero in 2013 when he tackled one of the Boston Marathon bombers, retired on Monday, May 31, 2021, after more than 41 years on the force. (AP Photo/Steven Senne)

WATERTOWN, Mass. (AP) — A suburban Boston police officer who became a national hero in 2013 when he tackled one of the Boston Marathon bombers retired from the only job he says he ever wanted.

Watertown police Sgt. Jeffrey Pugliese retired on Monday after more than 41 years on the force.

He wanted to keep working, but had reached the state’s mandatory police retirement age of 65. Pugliese, an Army veteran and the son of a police detective, said he had wanted to join the profession since he was a teenager.

“The best part of being a police officer is getting out there and helping people, saving lives,” Pugliese told WCVB-TV. “It’s because of all these police officers — not just in Watertown, but everywhere in the world — people sleep soundly in their beds at night because there are police officers willing to sacrifice their lives for them.”

During the April 2013 gunfight with the marathon bombers, Pugliese came face to face with Tamerlan Tsarnaev.

“We were just 6 feet, maybe 7 feet apart,” he told WBZ-TV. “The only thing separating us was a four-foot chain link fence. We were exchanging gun fire and his gun, now we know it ran out of ammunition but, at the time we didn’t know if it jammed. He stopped. He literally took the gun, looked at me, we made eye contact, and then he threw the gun at me and hit me in the shoulder with it. I holstered up and chased after him and tackled him.”

As Pugliese and two other officers held Tsarnaev down, his younger brother, Dzhokhar Tsarnaev, sped toward them in an SUV.

Pugliese grabbed Tamerlan Tsarnaev by the belt to pull him out of harm’s way.

“I felt the breeze of that car go by my face. It missed my face by inches,” Pugliese said.

Dzhokhar Tsarnaev ran over and killed his older brother.

Oscar-winning actor J.K. Simmons, who played Pugliese in the 2016 movie “Patriots Day,” sent a video message to the retiree.

“I’m the only guy in Hollywood good-looking enough to portray you on screen,” Simmons said in the video. “Thank you for teaching me how to shoot a gun and teaching me all kinds of things about the ropes of police work.”