Oldest US veteran of WWII, Lawrence N. Brooks, dies at 112 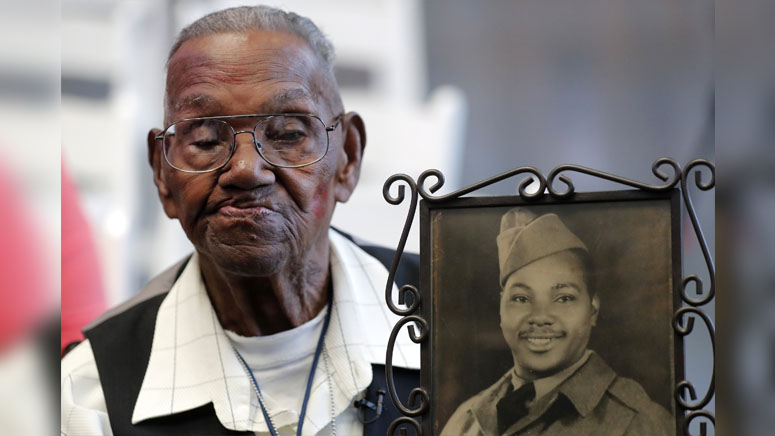 World War II veteran Lawrence Brooks holds a photo of him taken in 1943, as he celebrates his 110th birthday at the National World War II Museum in New Orleans, Thursday, Sept. 12, 2019. Brooks was born Sept. 12, 1909, and served in the predominantly African-American 91st Engineer Battalion, which was stationed in New Guinea and then the Philippines during World War II. He was a servant to three white officers in his battalion. (AP Photo/Gerald Herbert)

NEW ORLEANS (AP) — Lawrence N. Brooks, the oldest World War II veteran in the U.S. — and believed to be the oldest man in the country — died on Wednesday at the age of 112.

His death was announced by the National World War II Museum and confirmed by his daughter.

Brooks, born on Sept. 12, 1909, was known for his good-natured sense of humor, positivity and kindness. When asked for his secret to a long life, he often said, “serving God and being nice to people.”

“I don’t have no hard feelings toward nobody,” he said during a 2014 oral history interview with the National WWII Museum in New Orleans. “I just want everything to be lovely, to come out right. I want people to have fun and enjoy themselves — be happy and not sad.”

On sunny days, Brooks was known for sitting on the front porch of the double shotgun house he shared with daughter Vaness Brooks in the Central City neighborhood of New Orleans. Neighbors would call out to the local celebrity, wave and bring him soda and snacks.

Brooks was passionate about the New Orleans Saints football team and never missed a game, his daughter said. His church, St. Luke’s Episcopal, was also close to his heart and he never missed a Sunday service until the coronavirus pandemic hit.

Originally from Norwood, Louisiana, near Baton Rouge, Brooks’ family moved to the Mississippi Delta when he was an infant. He was one of 15 children. He said lived too far from the nearest school for him to attend, so his parents taught him what they could at home.

Brooks was working at a sawmill when he was drafted into the U.S. Army in 1940. After Japan’s attack on Pearl Harbor, he was assigned to the mostly Black 91st Engineer General Service Regiment stationed in Australia.

Most African Americans serving in the segregated U.S. armed forces at the beginning of World War II were assigned to noncombat units and relegated to service duties, such as supply, maintenance and transportation, said Col. Pete Crean, vice president of education and access at the National WWII Museum.

“The reason for that was outright racism — there’s no other way to characterize it,” Crean said.