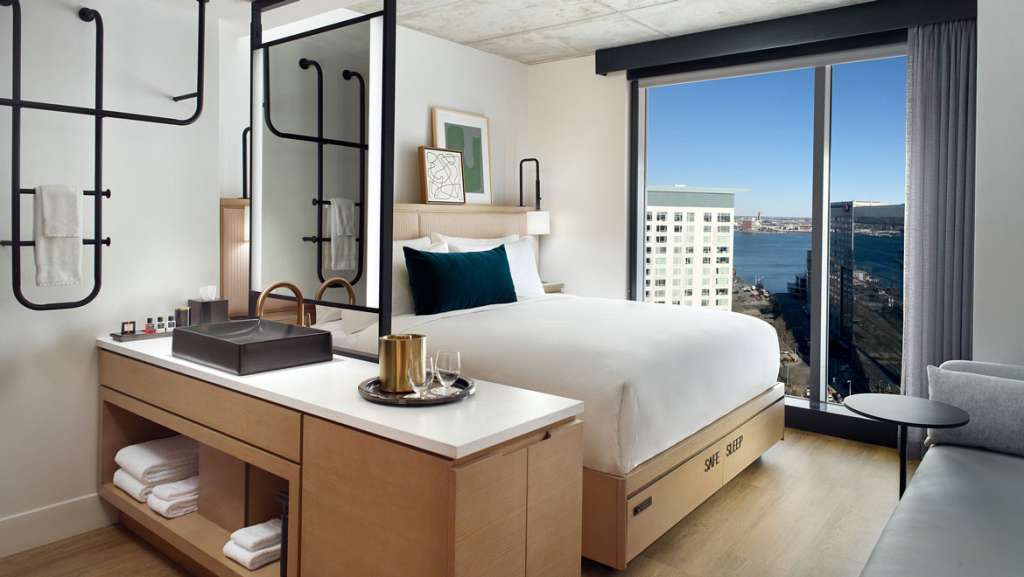 Artworks from some of the greats blends together on virtual displays behind the check-in counter. An art display of shoes made by local companies like Converse and Reebok sits just beyond the entrance. And a sports bar with wood flooring originally from the Boston Celtics’ training facility is down the hallway.

Those are some of the experiences that will greet guests when they walk into the Omni Boston Hotel in the city’s still-growing Seaport area once it opens to guests Thursday morning. Located just across the street from the Boston Convention and Exhibition Center (BCEC), the hotel will seek to take advantage of convention goers and tourists as the industry attempts to rebound from the ongoing impacts of the COVID-19 pandemic.

There are several events on the books for BCEC in the upcoming months including the Building Owners and Managers Association International Annual Conference and Expo from Oct. 6-9. But as the Delta variant poses new risks for businesses and drives up COVID cases in the state and the country, Omni Hotels & Resorts President Peter Strebel views the current situation as a “slowdown not a shutdown.”

“A year ago, two years ago when [COVID] first came out, and we had to shut these hotels, we didn’t know what we were dealing with,” he told the News Service. “At least now we know what we’re dealing with so I think it may hurt our business in the short term, but I think long term it will be very, very good. I mean, to have a 1,000 room hotel … attached to a convention center is very, very competitive in the convention market.”

Baker said the project came with a “tremendous” number of complexities and recalled the first time someone told him of the plan to build a hotel on a two-acre parcel of land owned by the Massachusetts Port Authority.

“I remember the first time somebody told me they were going to build a hotel on this site, and I looked at it and I thought to myself, in my dreams,” he said. “The second thing was the importance of this particular hotel to the success of the convention center across the street, and vice versa.”

The 1,054-room structure boasts two 22-story towers, a roof-deck pool overlooking the BCEC, an art gallery, seven restaurants, and the opportunity to create almost 1,000 jobs for Boston, Strebel said. The average room rate for the hotel runs in the mid-$300 range depending on demand, according to hotel officials.

When the $550 million project broke ground in 2018 at the corner of Summer and D streets, supporters said it would become the city’s fourth largest hotel and estimated it would create 1,100 construction jobs and between 700 and 1,000 permanent jobs.

“We had to stop construction for about three months so it put the project way behind schedule. We had already had business that was booked so we had to move the business,” he said. “It’s a complicated site because it’s a small site, we had to get meeting space in it and because we’re near the airport, it could only be so tall so we had to stuff a lot of things in a very, very small space.”

Lynch said the biggest impact of the new hotel will be felt in the “basement of this building where the 800 employees that will eventually be working here will go to a training program.”

“And that training program, run by the Omni and partnered with [UNITE HERE] Local 26 is really going to make a huge difference in the lives of a lot of people in this city, where we continually bring in people, train them, and then build careers,” he said.

Massport CEO and President Lisa Wieland said developers put together a very “compelling proposal” to build the hotel that included a diverse team — from equity investors to architects and construction firms to design teams.

“As the project went from concept to completion, I think a few key ideas and a few key takeaways became clear: first, public policy that broadens and deepens economic opportunity paired with a competitive market driven process can make a real difference,” Wieland said. “Second, the [DEI] approach on this hotel is a repeatable model and we are seeing the ripple effects.”

The building draws inspiration from Boston’s rich theater and art history, said Omni Hotels & Resorts Creative Director Laura McKoy, who added that when officials from the company first came to the city, they saw many places celebrating the history of the area.

“But what we didn’t see was celebrating the arts of Boston so that’s kind of where we took that idea and spread it throughout the entire hotel,” she said. “So through education, arts sciences, we’ve got the Artist Tower of guestrooms, the Patron Tower, two different designs.”