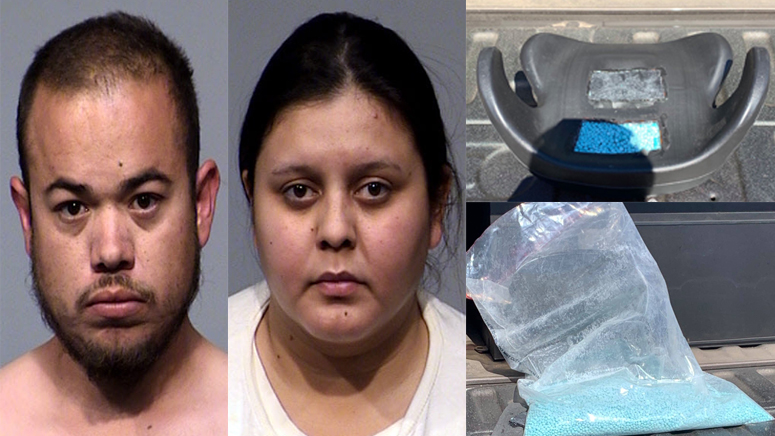 (WHDH) — A mother and father are facing drug trafficking charges after law enforcement officials recently pulled them over and found $1 million in fentanyl hidden inside a child’s car seat, along with their three young children in the vehicle.

Roberto Guerrero, 27, and Ana Razo-Villela, 24, both of Tucson, Arizona, were arrested last week after Yavapai County Sheriff’s Office deputies busted the couple with 52,000 fentanyl pills that were hidden in the frame of the car seat, authorities said.

All three of the children, ages 1, 5, and 6, were rescued from the vehicle, according to the sheriff’s office.

“I wish I could say I was shocked that parents of three young and innocent children would use a car seat to conceal such dangerous drugs,” Sheriff David Rhodes said in a news release. “But this is the sad reality of our world we live in today. People try to get creative when hiding their criminal activity. But they need to know that they can’t hide anything from us.”

Bodycam video from the bust showed a cloud of powder residue release into the air near a deputy’s face when he opened up the hidden compartment in the car seat and discovered the pills.

The sheriff’s office warned the public that fentanyl is 50 to 100 times more potent than morphine and all it takes is the equivalent of two or three grains of sand to cause an overdose death.

Rhodes also credited a K9 for alerting the deputies to the drugs, saying that the animal’s “thoroughness not only saved the lives of those who suffer from drug addiction, but his actions helped rescue three very young children from a dangerous environment.”