Parts of Yellowstone may reopen to tourists on Monday, but flooding has been a disaster for neighboring towns 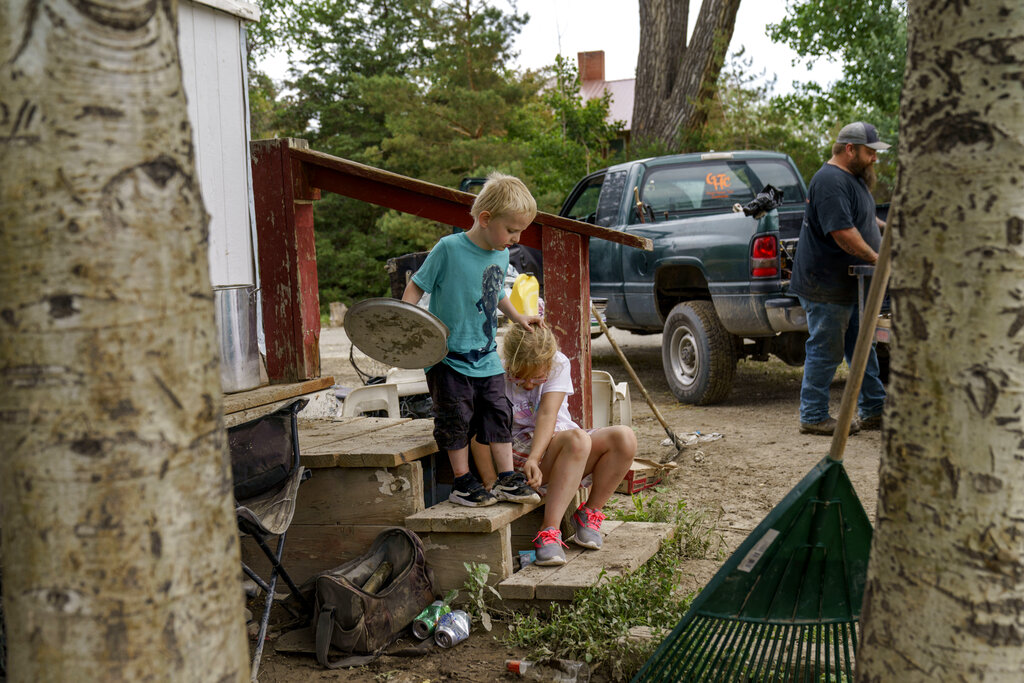 Harlee Holmes, 8, right, helps her brother Creek, 3, put his shoes on as the family packs up to leave their home that was damaged by severe flooding in Fromberg, Mont., Friday, June 17, 2022. (AP Photo/David Goldman)

(CNN) — Yellowstone National Park could partially reopen as early as Monday as officials continue to assess the damage caused by historic flooding, which now threatens to hamper the peak of the summer tourist season.

Heavy rains and rapid snowmelt caused rivers to swallow bridges, sweep away entire sections of roadway and forced the evacuation of more than 10,000 visitors. The sudden closure has fueled concerns from business owners and employees in surrounding communities who rely on Yellowstone visitors as a key source of revenue.

The park’s northern region, which bore the brunt of the flood damage, is expected to be closed for a “substantial length of time,” which will likely go through the end of the season, the park said in a release Tuesday.

The less-impacted southern loop could reopen as early as Monday, Park Superintendent Cam Sholly told residents and tourists in Cody, Wyoming, on Wednesday, according to the Casper Star-Tribune.

But while the southern loop reopening may provide relief to some tourism industry workers, those bordering the northern entrance are still left to wait.

In the south Montana city of Gardiner, which acts as a gateway to Yellowstone’s northern entrance, hotel owners are already feeling the impact.

“There’s nobody here,” Kari Huesing, office manager of Yellowstone Gateway Inn, told CNN. “We were booked solid for a year.”

Now, she says, all but one of her visitors are gone following the flooding, and one neighboring hotel has shut down and sent its employees home.

“It’s a Yellowstone town, and it lives and dies by tourism,” Park County Commissioner Bill Berg said of Gardiner.

In Cody, which lies east of the park, tourism industry workers were eager for answers from Sholly on the southern loop reopening, the Casper Star-Tribune reported. Sholly hopes gateway communities and park staff can determine how to sustain local businesses without attracting more visitors than the park can host, the paper reported.

The dangerous flooding fueled by heavy rainfall and snowmelt began to inundate the park and several surrounding communities Monday, overtaking essential roadways and bridges, and making it dangerous or impossible for some people to evacuate.

As some communities became surrounded by water, at times without power or drinking water, search and rescue teams worked to evacuate residents. The Montana National Guard this week carried out 87 rescues by helicopter, it said Wednesday on Facebook.

In Montana’s Park County, which includes Gardiner, water has been receding, and access to the communities that had been surrounded by floodwater has been restored for emergency vehicles at a minimum, Greg Coleman, the county’s emergency services manager, said Wednesday morning.

President Joe Biden on Thursday approved a disaster declaration for Montana in areas affected by flooding. “Federal funding is available to State, tribal, eligible local governments and certain private nonprofit organizations on a cost-sharing basis for emergency work and the repair or replacement of facilities damaged by the severe storm and flooding in the counties of Carbon, Park, and Stillwater,” the declaration states.

All five entrances to Yellowstone will remain closed through at least the weekend, the park said in a release Tuesday, and the northern roads of the park will likely be closed for an extended period due to “severely damaged, impacted infrastructure.”

The battering floodwaters wiped away entire segments of paved road near the northern entrance, downed trees and triggered multiple mudslides.

Communities surrounding Yellowstone are also reeling from the catastrophic damage. Quickly moving waters compromised several roads and bridges, submerged cars and even swept away homes as the underlying foundations became completely worn away.

In Park County, at least two homes collapsed into the intruding Yellowstone River early this week, and numerous homes and businesses were flooded, said Coleman, the county emergency official.

Video from witnesses showed one building in Gardiner collapsing into the river on Monday. Gardiner was isolated by water Monday and into Tuesday as flooding rendered roads and bridges impassable.

Aerial video captured by CNN shows one Montana home hanging precariously over the edge of a severely eroded embankment. Photos of the aftermath in the city of Red Lodge, Montana, on Tuesday show several streets piled with rocks and debris as water still runs over the sidewalks.

The record flooding was caused by a combination of heavy rainfall and snowmelt from high elevations over the weekend in the Beartooth and Absaroka mountain ranges, which stretch across the Montana-Wyoming state line.

The level of runoff is comparable to the region receiving two to three times a normal June’s precipitation in only three days, according to CNN meteorologists.

A flood wave moved east Tuesday and Wednesday along the Yellowstone River, the National Weather Service said, leading to reports of major flooding in Billings, which is about a 175-mile drive east of Gardiner. By Tuesday afternoon, the river at Billings had surged well above its previous record of 15 feet, according to the weather service.

The plant resumed operations at a low level Wednesday afternoon, and by Thursday morning it was working at full capacity, city officials said.

Even as water levels began to recede in areas on Tuesday and Wednesday, park officials and residents in the region are bracing for the possibility of more flooding in the coming days.

More snow could soon melt in the mountains of Wyoming and Montana, and that, coupled with more rain this weekend, could cause river levels to rise again, the National Weather Service’s office in Billings said.

Warm air is expected to move over the mountains Thursday night, keeping the low temperatures above freezing. This, along with plenty of sunshine during the day, should get snow melting. “Temperatures will be in the 50s and 60s in the high country both Friday and Saturday afternoon,” the weather service said.

“Expect a few days of melting of what is still a substantial snowpack in the mountains.”

Showers and thunderstorms are expected to hit the area Saturday night and Sunday.

The weather service’s latest river forecasts predict substantial rises due to the melt. Still, the levels are predicted to be well under flood stage, because the rainfall amounts look very light. River projections show this new rise in water peaking over the weekend around Yellowstone and in Billings on Monday.

“By the time slightly more substantial precipitation arrives Sunday night into Monday, temperatures drop into the 30s, and snow is probable above 8,500 feet Sunday night,” the weather service said.

“That said, those with interests near waterways in the western foothills should pay attention to the forecasts through the weekend in case the forecast changes significantly,” the service added.

The intense rainfall and rapid snow melt already experienced by the park and nearby communities are consistent with projections laid out in a climate assessment report released last year from scientists with the US Geological Survey, Montana State University and the University of Wyoming.

The climate crisis is already driving more annual precipitation and runoff from melting snowpack in the Greater Yellowstone Area, and the trend will continue in the coming years, the report said.

Correction: A previous version of this story misspelled Kari Huesing’s first name and incorrectly identified her position at the Yellowstone Gateway Inn. Huesing is the office manager.