Pivotal Game 5 on tap for Celtics-Bucks 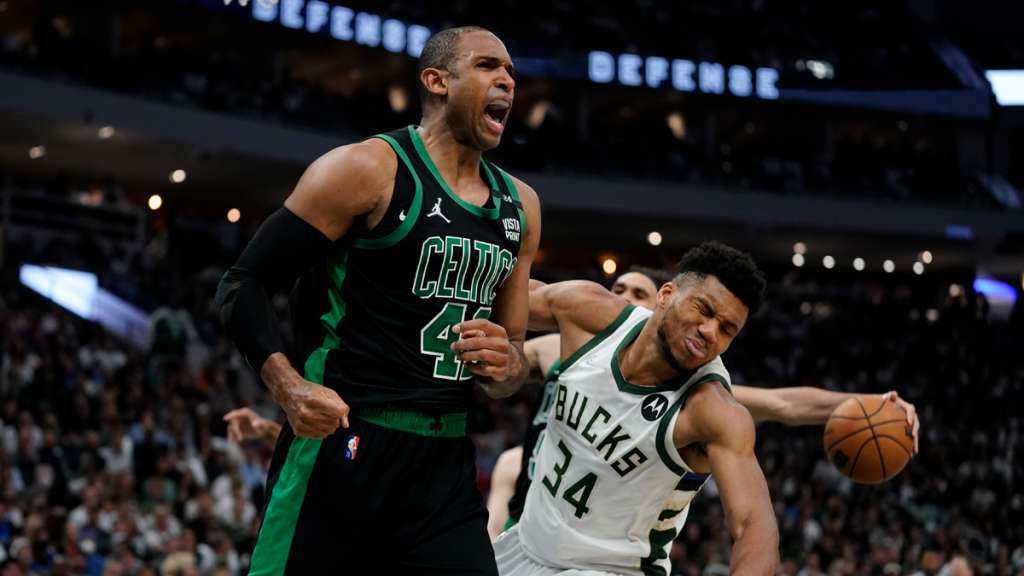 Boston Celtics' Al Horford reacts in front of Milwaukee Bucks' Giannis Antetokounmpo during the second half of Game 4 of an NBA basketball Eastern Conference semifinals playoff series Monday, May 9, 2022, in Milwaukee. The Celtics won 116-108 to tie the series 2-2. (AP Photo/Morry Gash)

In the Bucks-Celtics series, Boston’s Al Horford has tapped into a level of his game during the playoffs that many thought he’d lost at age 35.

It reached a new height in Game 4 during the Celtics’ 116-108 win over the Bucks on Monday night. The five-time All-Star scored 16 of his playoff career-high 30 points in the fourth quarter to help Boston tie the Eastern Conference semifinal series with the defending NBA champions at two games apiece.

Equally important, the Celtics have reclaimed home-court advantage as the series shifts back to Boston for Game 5 on Wednesday.

After spending a challenging season in Oklahoma City last year, Horford was packaged in the Thunder’s trade for Kemba Walker, returning Horford to where he last earned All-Star honors in the 2017-18 season.

Horford said he feels like he’s experiencing the fruits of an offseason in which he focused on being ready to play meaningful games again. He has gone from averaging 10.2 points and 7.7 rebounds during the regular season to 15.9 points and 9.4 rebounds in the postseason.

“That’s from sitting at home,” Horford said. “That’s from watching the playoffs, not knowing what my future was holding and really just hoping to have an opportunity to be in this type of environment.”

The resurgence has coincided with Boston needing someone to step up after big man Robert Williams III was sidelined for the second time this postseason, sitting out Game 4 with soreness in his surgically repaired left knee. He is questionable for Game 5.

After missing an opportunity to take a 3-1 series lead, Bucks guard Wesley Matthews said there’s no time to sulk.

— NEED TO KNOW: After dropping the series opener at home, Boston is back at TD Garden with a chance to put the defending champion Bucks on the brink of elimination. The Celtics are 3-1 at home this postseason and continue to find ways to frustrate Giannis Antetokounmpo late in games.

— KEEP AN EYE ON: Milwaukee in the fourth quarter. The Bucks were outscored in the final 12 minutes in three of the four games, including 43-28 in Game 4. The only time it didn’t cost them was their 103-101 win in Game 3.

— PRESSURE IS ON: The Bucks. With no reinforcements coming in the form of Middleton returning, Antetokounmpo will need the best from his remaining supporting cast to avoid going down 3-2.